You can read all the most cutting-edge research you want to convince yourself that you're on top of it, but if you're not 21 anymore or genetically gifted, you've got to get real.

You've got to apply common sense. You've got ask yourself some serious questions and accept what might be some inconvenient truths. The answers will do more to determine your ultimate progress than any training program or diet you undertake. Ready?

I'm 32 years old now, and I started working out properly for size and strength around age 20. The methods my trainer and I used worked well, but I'd be lying to myself if I thought I could handle them now for more than a week.

The simple truth is that I just don't have the same work capacity that I used to, and that seems to be a common theme with people who train through their adulthood.

To be clear, not having the same work capacity doesn't necessarily scream "worse." It just screams "different."

It means that if you're not a young stunner anymore, you'd be wise to modify your training program so you can still get away with working hard on a consistent basis – even if that means scheduling shorter workouts, a couple of deload weeks, 15 more seconds of rest between sets, or a little bit lower volume with the heavy stuff.

The lesson learned is simple: Respect your calendar age by tailoring your workouts to match the training effect you're after – not a certain performance number or standard.

Regardless of whether it's something like chronic shoulder pain or something serious like a surgically repaired back or knee, these things should be factored in when you're considering the demands of your program.

One-size-fits-all programs don't "know" what you've been through, and clustering up to 90% of your max weight multiple times per week may not be the smartest idea you've ever had.

Still, there's encouragement to be found. Never forget that the beauty of training for the long haul is that you have a much less urgent "deadline" to add muscle and strength. You can still do it, as long as you remain realistic and give your body the accommodations it needs.

On top of this, you've now opened up the possibility of considering other ways to view "progression," like increasing range of motion, optimizing tempo, and reducing rest intervals.

That's a very important factor to consider when taking a rational approach toward seeing goals. A lifter who's spent 15 years in the gym will react differently to a program for strength and size than a lifter who's brand new to the game.

An overly ambitious program might seem good on paper to the novice lifter, but might prove too advanced and have adverse effects. On the flipside, a simplistic program may have utility for an experienced lifter, but chances are that finally hitting that 400-pound deadlift or squat might require some advanced lifting methods.

Respecting the amount of time you've spent under the iron is the first step to knowing just what to implement to bring your gains to the next level. And be honest – it's easy to say you're advanced. Simply put, if you're not sure if you are, you probably aren't.

It's unrealistic to think that reaching a double-bodyweight squat or deadlift is attainable as a 37 year old who's 6'6" and 275. Standards like that are geared toward young, healthy, and most importantly, usually light individuals where relative strength plays a bigger role than absolute strength.

The size of the individual is rarely taken into consideration when creating rules for strength training, and many programs make a similar misstep in ignoring a lifter's individual anthropometry. Having longer femurs and a shorter torso will make a conventional deadlift more of a hassle for a tall lifter than the other way around.

By extension, adding mass as a taller lifter may require slightly different approaches because of a defining factor that differentiates a longer-limbed lifter from a shorter one: work.

Of course a good lifter will "work hard." That's not what I'm talking about. It's about the actual physics of lifting. Work is calculated as Force x Distance. As such, if a tall lifter and a short lifter are doing squats with the same load to full depth, the taller one will end up doing more work because of how much farther he has to go up and down.

That should put into question whether or not chasing a prescribed percentage of max effort lifts with limited rest intervals and plenty of volume will serve a tall lifter the same way it does a shorter lifter.

Most often, longer-limbed lifters need to bridge the gap by adding more volume to choice isolation movements that still deliver a lot of bang for their buck, and a bit less volume to big, neurally-draining exercises. 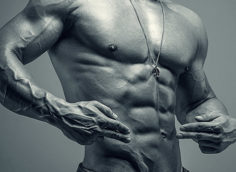 This low hip position deadlift is more for the quads. Try a semi-sumo stance – chest up, weight on heels – and pull from a deficit. Start light!
Deadlift, Exercise Coaching, Tips
Ben Bruno January 18

Do this drill before training your back. It'll fix those tight pecs which make it difficult to recruit your upper back muscles.
Chest, Mobility, Tips, Training
Andrew Heming August 27

Four experts - a functional strength coach, a bodybuilder, a powerlifter, and an athlete-creator - share their thoughts on one of the most beloved (and hated) exercises.
Squat, Training
Nate Green November 30