"Good bodybuilders have the same mind, when it comes to sculpting, that a sculptor has. You have to analyze. You look in the mirror and say, 'Okay, I need a little bit more deltoids, a little bit more shoulders to get the proportions right.' So what you do is, you exercise and put those deltoids on." – Arnold in Pumping Iron.

What do Frank Zane, Flex Wheeler, Dexter Jackson, and Phil Heath have in common, other than being four guys you'll probably never get to talk training with over a beer and some wings?

They stood out from the rest of the big guys on stage because of their constant focus on building symmetry rather than simply adding muscle regardless of proportion. They paid deliberate attention to developing each side of the body relative to the other – front, back, left, right, upper, and lower – as well as only building each individual muscle as it relates to "the total package."

Whether we're talking about the delts, arms, calves, or any other bodypart, symmetry and proportion are aspects of bodybuilding that often get overlooked by the recreational lifter. It's considered something only the pros have to be concerned with, or "not important right now because I have to get big before I worry about that detail work." That kind of thinking is as inaccurate as it is shortsighted.

Muscular size without balanced symmetry is like a gym with seven squat racks and only two barbells. The potential for something great is there, but it ends up totally missing the mark because of poor planning.

Not to mention the strength and health benefits of a balanced physique. Healthy joints, surrounded on all sides by well-developed muscle, will be better protected and more resistant to pulls or strains.

As far as using that strength, show me a powerlifter who doesn't think a big, strong back is required for a big bench press and I'll show you a guy who needs to increase his bench.

Let's figure out how we can implement symmetry training into your current plan for even better results.

There are a bunch of examples throughout the body where muscular symmetry, or a lack of it, can be either impressive and noteworthy or laughable and embarrassing.

On a large scale:

On a relatively smaller but still significant scale:

Now admittedly, those last two examples are a type of fine-tune work that only deserves major attention if you're actually closing in on your physique goal. However, the general idea is worth keeping in mind for the long run so you have that much less catch-up work to do when the time comes.

Other multi-headed or "multi-muscle muscles" such as the quads, hamstrings, or biceps don't necessarily require the same particular attention because it's much more difficult to significantly target or prioritize those heads with special exercises or techniques.

Asymmetry Makes an Ass Out of You and Me, But Mostly You

Once you've taken a cold, hard, truthful self-examination, we need to figure out how to fix whatever needs fixing. Now that you've analyzed your physique and noticed what's disproportionate, the first step is to try to figuring out why.

Consider the body part and think back to remember how long it's been slacking and then look at how you've been training it recently (the last month, three months, year, whatever). This is why keeping a consistent, detailed training log is so important.

Your thought process should be along the lines of, "Hey, I've almost got a straight line from my ass to my knee. There are supposed to be hamstrings there. Oh, wait, I haven't deadlifted or done a leg curl since Chappelle's Show had new episodes." Ta-da.

If it's an issue of left/right asymmetry, which is probably the most common discrepancy around, that calls for a different plan of attack. If you ask most lifters the best way to address that issue, they'll shoot you the obvious answer, "Just add some extra sets for the smaller side."

This is like telling a 270-pound lady the best way to lose weight is, "Just eat a little less at each meal." Thank you, Sherlock, I truly wish I'd have tried that first. That method might deliver some results in the short term, but it's not the most effective way and it doesn't really solve the problem.

Arbitrarily doing "a few more sets" for the lagging side just doesn't make sense. How many more sets? Should I keep the same rep range? Do I add the sets at the end of the regular workout or do I add a small-side-only training day later in the week?

At best, you're going to waste time and energy putzing around instead of addressing the issue efficiently. At worst, you'll flip the discrepancy because you lost track of the goal and end up with a new dominant, overpowering side.

If your problem is as simple as one underdeveloped muscle (tiny calves, lagging rear delts, etc.), the most direct way to get things back on track is to attack it head-on with a short-term specialization program designed to give the muscle enough time in the spotlight to get where it needs to be.

John Romaniello wrote a pretty solid guide to specialization workouts here. If you're looking to give a significant boost to one bodypart, you can make a big difference with four to six weeks of targeted work if you go after it with 100%.

If you've got more than one bodypart that needs to be evened out, prioritize. By definition, you can only have one "worst" bodypart at a time. Figure out what needs the most work or what will have the biggest overall impact on your physique or strength, and address it. Then, once you're one step closer to being balanced, work on the next issue.

However, remember when I pointed out that left/right asymmetry needs to be corrected differently? Well, the solution is kinda simple and also kinda counter-intuitive. You're going to focus on the lagging side to an extent, while putting the "good" side on maintenance.

Oh no – gasp and double-gasp – the dreaded "M" word. Surely that means wasted time, several weeks when our strong side does next-to-nothing, practically withering away while we go on and on trying to improve the lazy, lagging side? Hardly.

This approach makes the most sense because the lagging side needs the extra attention without the stronger side coming to the rescue. If you're like most people, when you lift with both limbs and there's a noticeable difference in strength, the weaker side will (obviously) fatigue first and the stronger side will compensate enough to let you finish a few more reps.

However, this is the same as doing a barbell bench press, approaching failure, and then lifting your ass a foot off the bench and bouncing the bar off your chest to continue repping out. Yes, technically you're doing more work than if you'd ended the set sooner, but it's much lower quality work that isn't benefiting you in the long run.

To really give the lagging side a chance to catch up, we need to strategically use unilateral exercises that let one limb, and only one limb, do all the work. We also need to let the problem side dictate the weight and reps used, which it likely hasn't been able to do for quite a while.

If your legs need to be evened out pronto, give these workouts a 6-week trial run, working the rest of your body in two or three sessions the rest of the week.

Begin each set of unilateral exercises (the leg extension, lunge, leg curl, and standing calf raise) with the weaker/smaller leg and perform reps until near-failure, then switch to the stronger side and only complete the same number of reps, even though it should seem "too easy."

If your arms are most noticeably uneven, give this twice-a-week plan a shot for a month or so. The rest of your weekly training shouldn't over stress the upper body too much or else you'll dip into the arms' recovery time. Something like legs/chest-shoulders/back or even a basic upper/lower body split would allow the arms enough rest between direct sessions.

Begin each unilateral set (the one-arm curl and the one-arm triceps extension) with the weaker/smaller arm and perform reps to near-failure, then switch to the stronger arm and only complete the same number of reps, even though it should seem "too easy."

Again, as with the other arm day, begin each set with the weaker/smaller arm and work to near-failure, and then switch arms and match the same number of reps.

It All Evens Out In The End

If you haven't learned that balanced bodybuilding is better bodybuilding, you might be a lost cause. Or you might just be forgetting that there's a bit more to building muscle than picking things up, putting them down, and making the scale read higher.

Whether your current goal is massive size, raw strength and power, or super-crazy-deep abs, maintaining an aesthetic eye in your program design will always pay dividends. You'll still get where you want to go, but you'll end up stronger, healthier, and with an even better-balanced physique to show for it. 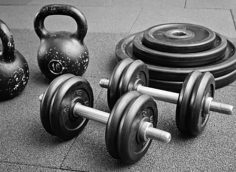 Nothing gets you more jacked (mentally and physically) than pulling eight plates or more off the ground.
Deadlift, Most Popular Deadlift Articles, Training
Tony Gentilcore April 5