If your back training program involves nothing but machine pulldowns, then put on a frilly pink dress 'cause you're training like a little girl! Okay, that's harsh. Pulldowns are okay for variety and for warm-ups, but there is some truth to that little girl comment. Chin-ups (and pull-ups) on a fixed bar are far superior to pulldowns for several reasons:

Most people avoid chin-ups because a) they're too lazy to do them or b) they're embarrassed about only being able to knock out a few reps. Neither is a valid excuse. Chins are too valuable to leave out.

One of our favorite chin-up routines was popularized by Charles Poliquin back in '97. He called it the "gymnast's extended back routine" because Olympic gymnasts use it to condition their backs. It was cool, but he warned that if you couldn't do at least 12 shoulder-width supinated chins, then you shouldn't do the routine.

Over the years we've tested the routine out on ourselves and others and have found that it works great, even if you're pretty weak in the movements. With some minor modifications, it can be a great program for increasing strength and size, even if you can't perform 12 reps.

By the way, a "chin-up" is the technical term for any movement in which you pull yourself up on a fixed bar. However, most people use it to mean "palms facing you." A pull-up would be with your palms facing away from you. We'll use those distinctions in the program below.

With this modified program, it doesn't matter how many reps you get. If you can knock out ten reps in each position, great! (Actually, if you can pump out that many, it's time to strap on some extra weight or hold a dumbbell between your feet.) If you can only get one rep per position, you're still getting five reps in the first set by the time you're finished. No problem. Shoot for six in your next back workout.

The Modified Gymnast's Back Routine

In a nutshell, you'll be doing one long set of both pull-ups and chin-ups using a variety of hand positions. You'll use the old "rest/pause" method between positions. After a warm-up and some stretching, do the following in order:

On the first set of wide-grip pull-ups, even though the directions say to use as many reps as possible, you could leave a couple "in the hole," especially if you're weak in chinning movements. In other words, you might choose not to go quite to failure. If you overdo it on this first set, your later sets might suffer. The order is also important. You'll be going from your weakest position to your strongest. Keep it that way.

When we say "wide grip," that means wider than shoulder width. Using a medium grip, your hands should be just above your shoulders. Narrow means that your hands should be almost touching. To perform the last set of parallel chins, you'll need to go snatch one of those V-shaped handles from either the low row or the pulldown machine. Your hands should be facing one another and only a few inches apart.

If you're too fatigued to pull yourself up in every position by your third set, simply jump or climb up to the bar and lower yourself very slowly. This eccentric-only movement will still help you get stronger. On all of the reps, avoid dropping like a stone. Control yourself on the way down for at least a two-second count.

This is a great program, but it doesn't complete your back training regimen. Take a tip from Ian King and always include some horizontal pulling movements like barbell or dumbbell rows. This horizontal pulling will go along perfectly with your vertical pulling exercises i.e. the chin-up. Start with whichever you're weakest in.

That's it. Now go start practicing your lat spread in front of the mirror. 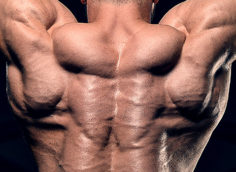 These unconventional exercises will nail all those little important muscles you miss with regular back training.
Training
Dan North June 2
Hello, T-Nation peckerheads! I'm the Critic. My job in this new article series is to call out various T-Nation contributors and put them on the firing line.
Training
T Nation December 4