I stared at the bar sitting on the safety pins in the squat rack and shook my head. My eyes were blood red, my face freckled with broken capillaries. I could barely make out my training partner's words over the pounding of my heart.

He knew the answer before he'd asked. It had been a year since I'd last hit a personal record in my squat, bench press, or deadlift. As a powerlifter, this rates right up there with having a grizzly bear use your scrotum as a doormat.

I'd never been accused of being a gifted athlete, and I'd taken up lifting weights as a kid because I sucked at sports and wanted to get better. I lifted for six years before I started powerlifting – four years in fitness purgatory, and two years in pursuit of a bodybuilder's physique.

Bodybuilding training, coupled with the liberal use of buffet-style dining in college, took me from 175 pounds to 200 in about a year and a half. I squatted, benched, and deadlifted, but only for the purpose of packing more muscle onto my frame. It wasn't until I began powerlifting that these became the means to an end in and of themselves.

Like many lifters new to the sport, I started out with Westside Barbell training methods. I made some initial progress with Westside, and even set a few deadlift records in my 198-pound weight class. (In powerlifting, with so many different organizations, and so many different classifications within those organizations, there's a lot more opportunity to get your name into someone's record book.)

I applied the principles as best as I could for a year and a half, and was willing to do whatever it took to improve my lifts. I traveled a few hours each week to lift with the best training partners, I force-fed myself up to 220 pounds, and I read every piece of training information I could find.

I began to wonder if I'd maxed out my genetic potential. I decided to move back down to 198 pounds and reconsider what direction I would take with my training.

I wasn't going backwards, but I sure wasn't moving ahead.

Still, I wasn't ready to throw in the towel. I wanted to try something new, no matter how crazy the program looked – anything that might bring me a personal record.

I eventually came across a method of training called Sheiko. I'd heard talk of it before, but it seemed more like a fairy tale than a program worth trying.

If I had to sum it up in four bullet points, here's how a training program would look:

A number of people reported being injured, and some claimed that the volume was virtually impossible to maintain. Sheiko was designed, they said, for genetic freaks and chemically assisted lifters. As a drug-free lifter with average genetics, those charges gave me pause.

But others who tried it said the opposite – that despite its extreme difficulty, you'd be rewarded if you made it through. I decided it was exactly what I was looking for.

Eric Talmant is an elite powerlifter who has competed at the highest levels as both a multi-ply and raw lifter. Equipped – that is, wearing multi-ply bench, squat, and deadlift gear – his personal bests are a 683-pound squat, 391 bench press, and 650 deadlift, at a body weight of 165. In raw competition – using just a belt and wrist wraps, with no squat suit, bench shirt, or knee wraps – his best lifts are a 485 squat, 290 bench press, and 635 deadlift. He's ranked fifth in the U.S. among all 165-pound raw lifters for 2008, and is an EliteFTS-sponsored athlete.

He's also the principal disseminator of Sheiko information in the United States.

Sheiko, Eric told me, was developed as a system of training, not just a single, one-dimensional program. Developed by Boris Sheiko, coach of the Russian powerlifting team since the 1990s, it's a multi-year training plan that can take a powerlifter from novice to elite.

One of the most interesting aspects is the fact you don't train with weights anywhere near those you'd use in competition. Most of the time, you work with 68 to 72 percent of your one-rep max, and you don't take any sets to failure. Unless you're advanced, you'll rarely go above 80 percent. (Advanced lifters also use a higher training volume.)

Which is not to suggest that Sheiko workouts are anything short of brutal. Here's what I wrote in my training log after my first session: "I was less than fully mentally prepared for this." If anything, that's an understatement.

In that first workout, I did five sets of five reps of squats with 265 pounds, 70 percent of my 1RM. It doesn't sound so bad, until you realize I did bench presses before and after. I'd never squatted and benched in the same workout before.

The next day I wrote this: "Legs are sore as hell on the inside, outside, front, and back. My back is sore as well. Glutes too. Walking itself is painful." Sitting and standing up made me wince.

The next day was Wednesday, time to deadlift. The workout began with deadlifts to the knees, an exercise that I'd never heard of, although the name is perfectly descriptive: You start the deadlift, stop at the knees, pause, then lower the bar to the floor. I used 385 pounds for four sets of three reps. I did some benching assistance next, then followed those with rack pulls.

I was supposed to use 435 pounds for four sets of three reps, but the bar wouldn't budge off the rack. I checked to make sure I had the bar in my hands, and wasn't just tugging on the safety pins. To get any reps at all, I had to raise the bar an inch and drop the weight.

Then I made the mistake of looking ahead to Friday's workout. I was scheduled to do squats, followed by bench, followed by front squats. Great.

Throughout that first week, my legs lit up like a blowtorch every time I took a step. I'd have preferred a midday stroll through the Sahara in bare feet to walking up the three flights of stairs to my apartment. A Winston Churchill quote came to mind: "If you're going through hell, keep going."

Because you're using the same muscles and movements over and over again, the stress of Sheiko training is cumulative in a way that's hard to understand just by looking at the workouts written out on a spreadsheet. Fortunately, I experienced less soreness as my body got used to the volume.

As I noted earlier, the workouts include a lot of sets of low reps, all at designated percentages of your 1RM, none taken to failure. These submaximal loads allow you to practice the competition powerlifts frequently without overtraining. The low reps help you preserve your form.

When you aren't training the competition lifts, you have three different classifications of supplemental exercises:

Here's a sample workout that a lifter new to Sheiko training might start out with (the percentage before each set-rep designation tells you how much of your 1RM to use for those lifts):

Why You're Probably a Beginner

If the thought of that Friday workout isn't intimidating enough – 100 reps of bench presses and squats, plus 125 reps of flies, French presses, and good mornings – there's the Sheiko classification system. Of the eight classes, three are considered advanced: MSIC (master of sport, international class), MS (master of sport), and CMS (candidate for master of sport).

If you're in my 198-pound weight class, as you can see in the chart below, you'd need to total 1,386 pounds in the three powerlifts to qualify for CMS, the lowest of the three advanced categories. (These are all raw lifts in competition or contest-like conditions.) To reach MSIC, you'd need your squat, bench press, and deadlift to add up to 1,727. With my total of 1,160, I fell into the Level 3 category.

Why does it matter what classification you fall into? The higher your category, the more you train. Those in the CMS and MS class train four times a week instead of three. MSIC lifters might work out five times a week.

Speaking of results, here's how it worked out for me:

Am I happy that I switched to Sheiko? Oh yeah.

Despite, you know, the drug thing, pro bodybuilders know quite a few secrets when it comes to training shoulders.
Bodybuilding, Shoulders, Training
Jimmy Smith August 16 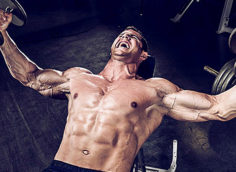 Here's why traditional German Volume Training isn't optimal for most lifters, and what to do instead.
Bodybuilding, Tips, Training
Christian Thibaudeau April 18

How Often Should I Work Out?
Bodybuilding, Powerlifting & Strength, Training
Christian Thibaudeau June 13