Whenever we wonder why certain muscles or muscle groups tend to respond better to training than others, the impulse is to either cast blame on (or give credit to) muscle fiber ratios. Those muscles that have a higher percentage of fast-twitch need less coaxing, and their counterparts need more. Lots more.

But what if some other factor played just as big a role in building muscle, and it was something you could not only diagnose in an instant with no equipment at all, but also change or control with just a little practice?

That's exactly what Andrew Huberman, a professor at Stanford School of Medicine, is suggesting. Here's what he says to do:

"March across your body mentally and see whether or not you can independently contract any or all of your muscles. For instance, if you're sitting in a chair or you're standing, see whether you can contract your calf muscle just using those upper motor neurons, sending a signal down and deliberately isolating the calf muscle."

Huberman believes that your ability – or inability – to isolate these muscles and contract them individually is a good predictor of how efficient you'll be in building the strength or size of that muscle. It's all predicated on the upper motor neurons that are involved in the control of a muscle.

Continuing on with the example of trying to contract your calf, Huberman says that the ability to "contract the calf muscle, hard, to the point where that muscle almost feels like it's starting to cramp, like it hurts just a little bit," indicates that you likely have good upper motor neuron to calf control and that you'll have a "decent to high potential to change the strength and the size of that muscle if you train it properly."

Conversely, if you can't properly contract the calf, or any other muscle or muscle group, for that matter, you'll likely have a harder time developing it.

What Huberman is suggesting isn't new by any means. Around a hundred years ago, a German strongman by the name of "Maxick" attributed much of his success to this same kind of muscle control. Maxick defined the term this way: "To be able by the exercise of willpower to contract certain muscles while relaxing others antagonistic to them...

Just as Huberman suggests, Maxick would "march" across his body from head to toe, contracting every muscle along the way. This skill, he believed, led – or at least contributed to – his impressive strength and muscular development.

While Maxick was the father of this system, a lot of other notable strongmen of the day, like Eugene Sandow, Otto Arco, Edward Aston, and Antone Matysek adopted his ideas. Sandow, for instance, would allegedly practice muscle control while reading the newspaper.

But, like most training systems, "muscle control" was spat into the chaw bucket of history, but Dr. Huberman may just have daintily picked it up and washed it off.

(Note: Maxick's real name was Max Sick, but he figured it wasn't good for business, kind of like being a social worker with the name of Bobby Hitler.)

If I were to rate my muscle groups, I'd say that my calves and my forearms are my worst parts, and sure enough, I can barely make them contract at all. They're like fish that have been left on the dock for five minutes.

The question is, though, what'll happen if I practice mentally flexing them? I'm sure I can get better at making them contract, but will the increased upper motor neuron efficiency translate into being able to make them grow better?

That's what Maxick believed, and Huberman hints at, and it's an easy enough experiment for me or anybody else to conduct. 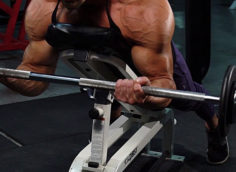 This classic bodybuilding exercise deserves a place in your workout. Here's why and how to do it right.
Arms, Bodybuilding, Tips, Training
Travis Hansen May 1 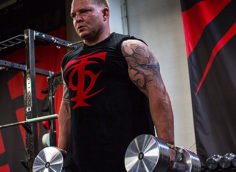 Everything most young coaches tell you about over-40 training is wrong. Here's why and what to do instead.
Bigger Stronger Leaner, Over 40, Training
TC Luoma September 13

You've seen it. You've done it. We all do it. Stop doing it.
Athletic Performance, Powerlifting & Strength, Tips, Training
Dan John May 15
A lot of you have been training for years, and as such have experimented with dozens of training methods. Most are probably long since forgotten, like the girl with the braces and padded bra that you dated once or twice back in high school. There wasn't any chemistry and you went your separate ways.
Training
TC Luoma December 22