The cruel reality of life is that we all can't lift at real facilities like Bill Hartman and Mike Robertson's IFAST in Indianapolis or Eric Cressey's Cressey Performance in Hudson, Massachusetts.

Many of us are forced to train in a dreaded health club; where the yoga and step classes take priority over the weight room; where there are rules prohibiting grunting and the slamming of weights; where shoes are mandatory and high socks and headbands are optional but highly recommended.

After my internship ended at Cressey Performance in December 2008, I began to work and train regularly at a health club. That doesn't mean I left behind strongman circuits, rack pulls, two-board presses, sled pushes, and glute ham raises. I simply had to improvise and inject some Testosterone into the pink dumbbell-filled facility.

A lot of the times, the gym owners had to be cold cocked and bound with duct tape, but it was doable.

Here's how I did it.

This should be a staple in everyone's training regimen. Sled work is fantastic for producing power, increasing fat loss, and all-out energy systems work.

Place a majority of the plates in the middle of the mat and run the rope through it as shown in the video. Fold the mat over the plates and place one or two more plates on top of the mat to keep everything secure. Now, as long as you have a rubber or wood surface, you have a working sled.

The second option is to again take a sit-up mat and place a plyometric box on top of it. Weigh down the "sled" by placing any kind of weight into the upside down plyometric box. Now you can push the sled or use some rope to pull it.

I've yet to enter a commercial gym that owns a glute ham raise even though it's the most effective glute and hamstring exercise without "deadlift" in the title.

They take up the same amount of room as those abductor/adductor machines women use to keep the runway in tip-top shape, but the majority of members wouldn't know what a glute ham raise is for anyway and may get hurt trying to do side crunches or back extensions on it.

If you have a training partner, have them hold your ankles down as you do rebound glute ham raises on the ground. If you're training stag, this is a great way to train away those chicken legs of yours.

These work fantastically well for my female clients, since the hamstrings tend to be one of their "need to look great" areas. 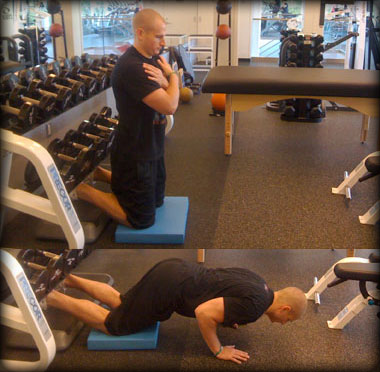 We all know how important it is to warm-up with foam rolling to keep tissue quality in check, thanks to Tony Gentilcore's Soft Tissue for Tough Guys and Eric Cressey and Mike Robertson's series of DVDs.

Hopefully, by now, you've graduated from those Charmin-soft white foam rollers that the health clubs purchase for the soccer moms. Now it's time to head to the hardware store to drop five bucks on some plumbing equipment. Yes, some PVC pipe.

What diameters should you ask for? Two feet long and four inches wide will suit pretty much everyone. If the PVC pipe is still too uncomfortable while doing soft tissue work, just throw a towel or a yoga mat on top of it to relieve some of the pressure. 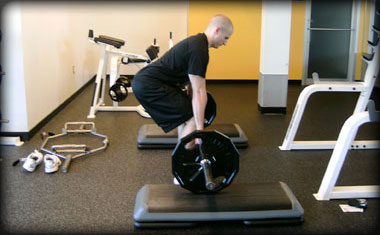 No power racks where you train? You don't say! Not enough room with two Smith machines for those looking to do some explosive calf raises? But what if you want to do some rack pulls?

Sneak into the step class studio and grab two exercise-steps and the appropriate amount of raisers for the kind of rack pull you'd like to perform (usually from shins or knees).

And guess what? You can do the same for box squats. Plus, having the option of one-inch increments is nice, since you can continue to go deeper as your hip mobility improves.

Thick grips are fantastic for working on grip strength and forearm size, but no commercial gym will spend the money allocated for the Shape magazine subscription on something that would actually benefit its members.

There's one thing that these gyms have plenty of, however, and that's towels. So if you don't have thick grips, wrap a towel around the grip of any dumbbell, barbell (this is great for thick-grip barbell benching), or cable attachment.

As an added bonus, throw the towel over the neutral-grip pull-up option for one of the ultimate bicep, back, and forearm exercises. If you can't do pull ups, you can also put it through the karabiner of a lat pull-down.

One more bonus: Do the same with dumbbell farmers walks, and hold on for dear life.

And despite the fact that using chalk instead of wraps is essential to improving grip strength, most clubs don't allow chalk due to the mess it creates. I was able to get around this at my gym by putting my chalk in a plastic bag, which then went inside a Tupperware container. As long as you clean up the bar when you are done, you should be able to get around that policy.

The Benefits of Chain Work Without the Chains

Bands have become popular at commercial gyms thanks to their many uses in group settings. Let's be honest, they aren't very intimidating to the 50-year-old soccer moms who want to tone.

However, Superbands or Jump Stretch bands can be fantastic for allowing variable loads when performing push-ups, squats, deadlifts, or bench presses. The function of the bands is to have the load increase as you perform the concentric movement of the exercise. This can be huge for those who tend to grind out the last three or four inches of a bench PR or for those needing to work on speed. 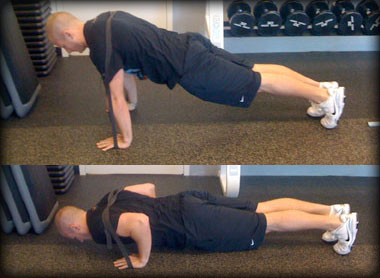 Band-resisted push-ups can be as challenging as you want to make them. Wide grip, close grip, on one foot, feet elevated, with an extra 45-pound plate on your back... get the picture?

And if there's one thing people need to do more of it's push-ups. You may remember Tony Gentilcore's article Stuff You Should be Doing But Aren't, where he outlines the benefits of push-ups: "improved scapular stability/upward rotation, improved explosive power, improved upper extremity strength, and improved lumbo-pelvic coordination."

Take Back Your Gym

I hope you were able to get something out of this to make training at your facility a little manlier, more enjoyable, and to increase your strength and size gains like never before.

If you have any more ideas for those of us who have to listen to top 40 hits while front squatting, please inject them here.

Shoulders banged up? Take a tip from top powerlifters and use a pad to reduce the tricky part of the range of motion.
Bench Press, Chest, Exercise Coaching, Shoulders, Tips
Eirik Sandvik May 15
Stagnation is unacceptable. Revive your workouts and watch your muscle mass increase while your body fat decreases.
Bodybuilding, Training
Chad Waterbury March 2
The truth about stretching without stretching the truth!
Training
John Paul Catanzaro April 22