Performing front squats with a clean grip is frustratingly painful for many lifters, myself included. It feels like the muscles and connective tissues in the hands, forearms, elbows, and shoulders are being stretched beyond their limits. As a result, it becomes extremely uncomfortable as the bar gets heavier. Missed reps ensue.

I don't do any Olympic lifts and I'm not a CrossFitter, so the clean-grip rack position isn't necessary. I front squat to strengthen my quads, upper back, core, and ultimately increase the amount of weight I can back squat. That's it.

I've tried stretching and unhooking my ring and pinkie fingers from the bar, and I've experimented with alternative grips such as the cross-grip, the "Brink grip," and even the no-hands mummy grip.

The cross-armed grip has certainly worked well for some and I've seen a handful of lifters front squat 500-600 pounds that way. For me though, no variation felt stable or secure across my shoulders. Stretching didn't help, either. I've even considered buying a front squat harness after reading how others have had success with it, but I wanted to exhaust all possible options before investing in yet another piece of exercise equipment.

Enter the "straps method." Simply attaching a pair of cheap lifting straps to the bar works extremely well for making front squats more comfortable. Not only do straps take the strain off the joints in the rack position, they can help force the elbows up to maintain rack position.

Wrap the strap around the bar and weave it through the loop. It should look like this: 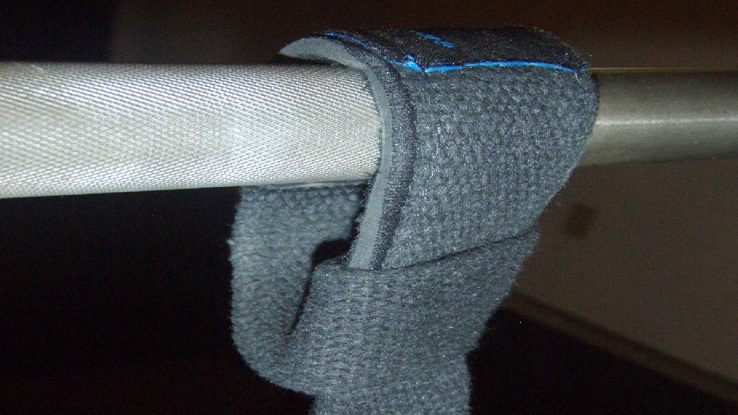 Position the straps about shoulder-width apart. They should be just outside the spot where the bar applies the most pressure to your shoulders.

During the front squat, you may experience a tendency to pull your hands towards each other, which could force the straps to slide out of position. Setting the straps at the spot where the bar pressure on the shoulders is highest prevents this. 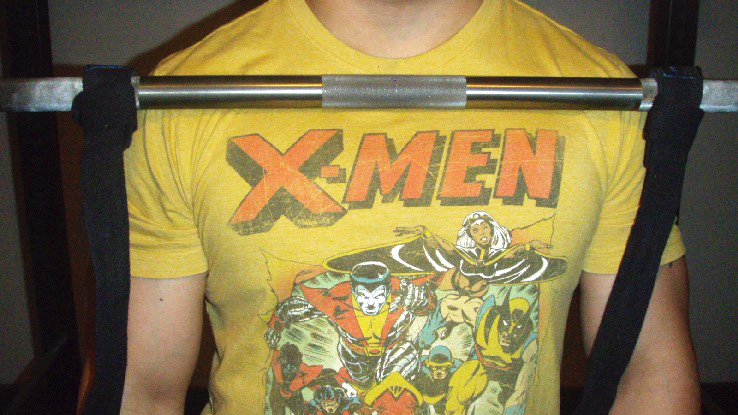 You don't want the straps wedged in between the bar and shoulder either, as this will push the bar into a slightly higher position. That could result in the bar rolling off your shoulders as you start the concentric portion of the rep (because that's the point where the elbows have a tendency to drop).

There are a couple ways to grip the strap. You can simply grab the strap or you can wrap it around your fingers. I like to first wrap the strap around two fingers (index and middle finger) for added security before gripping the strap. This will keep the hand from sliding to a different position on the strap during the exercise. 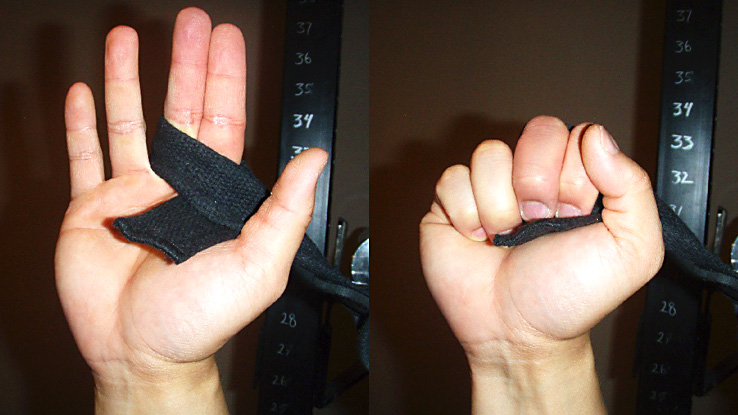 Where you grab will depend on your flexibility, length of the straps, and personal preference. Generally, the less flexible you are, the farther away from the bar your hands will be. 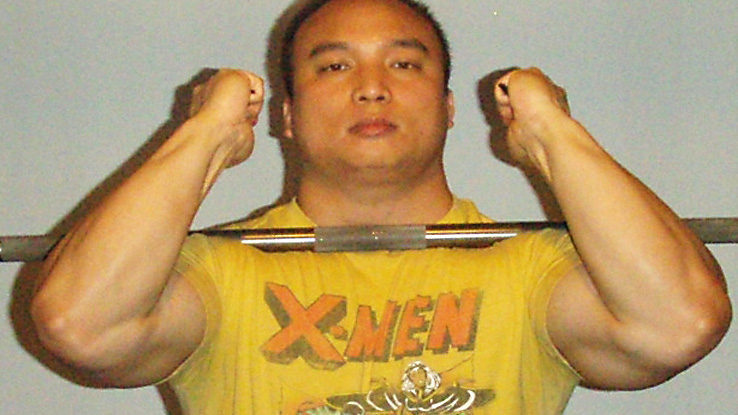 The beauty of using straps for the front squat is that you have a number of options for hand position. They can be in line with your shoulders, just inside your shoulders, etc. – just use whatever's most comfortable. No matter where you place your hands, the ultimate goal is to keep the elbows up high and the upper arms about parallel to the floor. The palms can be neutral (facing each other), slightly outwards, towards your face, or anywhere in between.

Next, before you even unrack the bar, clench your fists slightly and apply a bit of upwards pressure to the straps. In other words, grip tight and pull up.

Now you don't want to pull too hard (you'll do that later), but by applying a bit of tension to the straps before unracking the bar, you contract your anterior deltoids. Holding a heavy barbell across your shoulders is more comfortable when the shoulders are flexed. 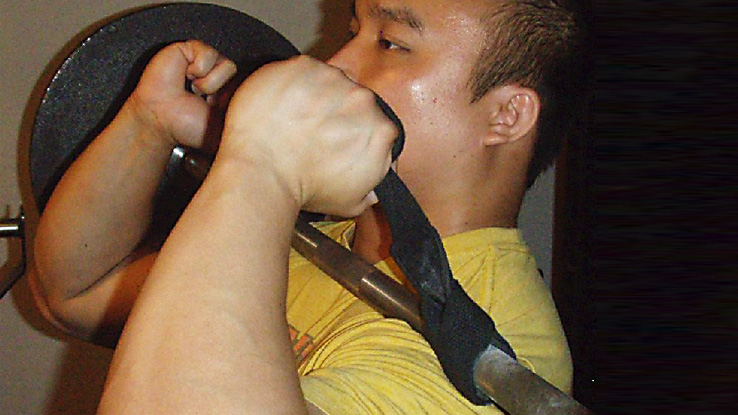 Think of it like this: If you're playing "shot-for-shot," a game where two people take turns punching each other in the arm, and it was your turn to receive a punch, you'd flex your shoulders hard in anticipation of the impact. Receiving a punch with a relaxed arm hurts a lot more. The same idea applies when the pressure of a loaded bar is digging into your deltoids.

Depending on how fast you descend, you may not need to worry about this part. If you tend to dive-bomb during the front squat, just keep the tension on the straps and maintain tightly clenched fists. 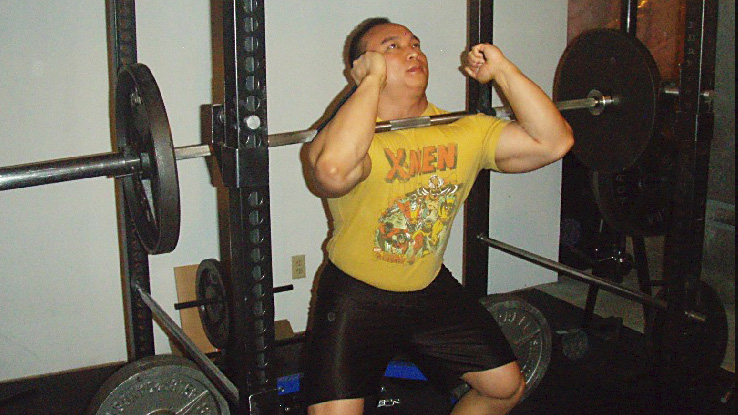 However, if you're a little slower during the eccentric portion, gradually increase the amount of force being applied to the straps by clenching your fists and pulling up hard on the strap. This will further reinforce the shelf created with your shoulders and ensure that your elbows are kept high as you enter the hardest part of the lift.

7 – Bottom Position and Coming Out of the Hole

Keeping the elbows up is especially crucial at the bottom position of the front squat (the start of the concentric phase), where there's a tendency for form to break down slightly. It's easy to keep the elbows up high and maintain the shelf with your shoulders when you unrack the bar, step back and squat down, but once you hit the bottom position and begin to explode up, you may have a hard time keeping your torso erect.

Your upper body might tilt slightly forward as you ascend and your elbows may drop, which can lead to the bar rolling off your shoulders. This usually happens when you're struggling with a heavy weight or during the last few reps in a set. The good news is, the straps can help keep the elbows up high during the lift. 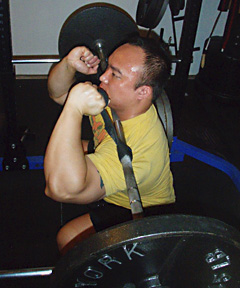 As you come out of the hole, clench your fists as hard as you can (if you haven't done so already) and try to crush the straps. Next, pull up and slightly backwards on the straps, as if you're trying to punch a wall above and behind your head. Just make sure you don't yank the bar forward. The direction of pull can be vertical but pulling diagonally works too.

At a lighter weight, you don't need to apply much force to the straps to keep your elbows up high. The fact is, apply too much force during a lighter set of front squats and you may end up pressing the bar too hard against your neck, making it feel like you're choking yourself. This isn't necessary. If the bar is already touching your neck, it means that your elbows are high enough. You can maintain the pressure to the straps and just hold that position.

However, at heavier weights approaching your 1RM or during the final few reps in a set, you'll need to pull harder on the straps just to keep your elbows up high. You shouldn't see or feel any movement from the bar (unless it rolls slightly forward and you've managed to pop it back into position with the "pulling on the straps" trick), but clenching your fists and pulling up on the straps will force your elbows to stay up high, allowing you to maintain the shelf created with your shoulders. This will keep the bar from rolling off.

Once you're out of the hole and past the sticking point, you can lower the pressure being applied to the straps. However, at no point during the lift should you allow any slack – you want to maintain tension by applying a bit of force onto the straps throughout the lift to reinforce the rack position.

As you can see, even though I'm pulling on the straps as hard as I can, it was still a fight to keep my elbows up.