Fat cells are like balloons. They have the capacity to inflate many times over normal from excessive lipid material, or to deflate to almost empty sacks if dietary restrictions are properly applied.

The largest fat cells have the diameter of a human hair, which means the balloons are extremely small. As a result, adults have billions of fat cells throughout their systems.

Scientists have taken fat samples all over the body, counted, and totaled them, with the help of extrapolation. These calculations vary greatly according to individual genetics. The numbers, however, range from a low of 10 billion to a high of 250 billion. A person with a minimum number of fat cells has a lower probability of being obese, compared to a person with a high number of fat cells.

Enhanced Fat: Daniela Malide, MD, a scientist at the National Heart, Lung, and Blood Institute, used fluorescent red dye on white fat cells, surrounded by green blood vessels, and photographed them through a two-photon microscope. Such fat can become excessive on the human body and must be understood and controlled.

Interestingly, there are significant gender differences. It's estimated that the average woman in the United States has approximately 42 billion fat cells. The average man has about 25 billion fat cells. Women have 68 percent more fat cells than men primarily because their bodies need to conceive and bear children. Extra fat offers a pregnant woman – under extreme conditions – more protection, warmth, and stored calories.

Women tend to deposit their excessive fat on their backsides, primarily over their hips and upper thighs, with some spreading to the middle of the upper back and triceps. Men have more frontal fat than women. The "potbelly" and "love handles" are almost entirely the problems of middle-aged men.

Approximately 90 percent of your fat cells were in place at your birth. Genetics play a huge role in your future fatness or leanness. But, as a result of overeating, you can create new fat cells (approximately 10 percent).

The primary times are during your first year, during puberty, and during pregnancy. Once you create new fat cells, they are yours for life. You can shrink them, but without surgery, you can't get rid of them.

The concept "losing fat" is actually a misnomer. You do not lose fat. You transfer it.

The chemistry inside of fat cells eases out of your body through heat: primarily in carbon dioxide; via your skin in radiation, conduction, convection, and evaporation; and through warm urine.

Losing fat is transferring fat – and transferring fat from inside to the outside is effectively killing fat. But (and this is important) that transferred fat often lurks about your body, waiting impatiently to get back inside.

Once outside your body and into the environment, the warm gases can be used by living plants that transfer it into food, where it can be applied again by animals, including you.

Such is thermodynamics and the interchange of fat, heat, calories, and energy. Thanks to Albert Einstein and others, it's a fusion of Biology 101 and Physics 460.

I cover all the details and guidelines in a new book called Killing Fat, which is co-published by Rodale (which is now owned by Penguin Random House) and Men's Health magazine. Thus, the complete title is Men's Health Killing Fat.

T Nation readers will be especially interested in the new negative-accentuated technique that I call 30-10-30. This stands for a set performed in this manner: a slow 30-second lowering, immediately followed by 10 normal-speed reps, and then a final 30-second negative. The entire set takes from 80-90 seconds.

For example, on the standing barbell curl:

During that set, if it's performed correctly, you'll feel your involved upper-arm muscles being stimulated to grow at a fast rate. My 30-10-30 routine almost guarantees that you'll be building muscle as you transfer fat.

With the thermodynamics involved in Men's Health Killing Fat, you'll assume scientific command of your fat cells. You'll be able to stop fat deposition in its tracks, shrink the cells significantly, get rid of unwanted pounds and inches around your waist, hips, and thighs, build your muscles, and improve dramatically your entire physique.

Men's Health Killing Fat is divided into five parts, 25 chapters, and 320 pages. For motivation, you'll see my before-and-after comparison photos of volunteers who have progressed through my program. The best 16 trainees are presented in full-page displays against black backgrounds. Plus, there are another 22 before-and-after shots that are almost as dramatic as the top 16.

With Men's Health Killing Fat, you can finally destroy your excess fat and take control of your lean, muscular body. Why don't you get involved today?

Is the deficit deadlift a dangerous exercise, or is it a safe way to build super strength? Answer here.
Deadlift, Training
Andrew Sacks September 17

Here’s what happens when John Meadows and Dave Tate get together for a workout… and what you can learn.
Bodybuilding, Chest, Shoulders, Training
John Meadows May 9 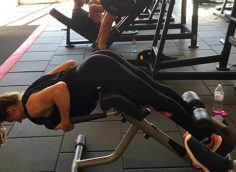 Good exercise to hit your hams and glutes, but there's a way to make it even better. Check this out.
Glutes, Legs, Tips, Training
Tom MacCormick June 29