Through aging, injury, or just lack of use, the legs can atrophy from a set of invincible limbs that win Olympics and break world records to scar-covered twigs of stiffness and limited strength.

While the proclamation, "Pain is temporary, and glory is forever" is common in youthful athletes, the sad truth is that glory is temporary and pain is forever.

Abuse your legs and it will come back to haunt you. There's nothing more humbling than having a leg injury or watching one happen. A healthy, mobile person is reduced to a limping or lame figure in seconds.

There's massive debate and always will be on strengthening and rehabbing the legs. Ask ten trainers and you'll get ten methods and plenty of debate about who's right. That's the problem – their arguments seem to focus on the differences, not the similarities. I'm not going to jump into the forum wars, just offer a simple tool that has a powerful effect.

The pistol or one-legged squat is a body weight or weighted drill that requires flexibility, leanness, balance, and leg strength. It's easy for some and next to impossible for others.

Those who have an innate talent for doing them make the task look ridiculously simple. Then there are those who can easily squat over 500 pounds who attempt pistols and look like a one-legged man in an ass-kicking contest.

The pistol is not just a circus movement to be used to impress your friends or gain rep points online. There are many upsides to becoming proficient in them:

However, there are downsides to the pistol.

Rather than dwell on the ups and downs, let's target the best part of the pistol and make it a drill that serves us now instead of challenging us for months. 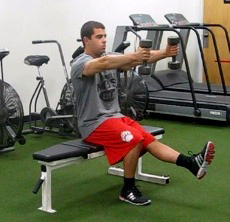 The box pistol is used as an intermediate tool for accomplishing a standard full-range pistol. It's like a box squat, except progressive range of motion is used to create overload instead of progressive resistance. In other words, you slowly lower the height of the box until you're doing rock-bottom pistols.

There are two types of box pistols, loaded and unloaded. Some folks, because of body proportions, will need a load in their hands to counterbalance the body. For lighter individuals, non-weighted box pistols may be the ticket since adding any load will be too much for them to overcome if their legs aren't strong.

The leg, like the arm, is a series of joints. Wing Chun Gung Fu master, Nino Bernardo, describes the shoulder as a ball and socket, the elbow as a hinge, and the wrist as a 'universal' joint. The same structure occurs in the leg. The hip is the ball and socket, the knee is a hinge, and the ankle is the universal joint. When we practice the box pistol barefoot, as you should, the neglected muscles of the foot are also stimulated.

Balance is unique and misunderstood. There isn't whole body "balance" per se, but individual "balances." So by practicing balancing on one leg, you're only improving the ability to do just that – balance on one leg.

Regardless, attempting to stabilize on one leg is an enlightening drill. What's revealed is that there's a pronounced difference between the left and right legs. By training them individually you can minimize the disparity between them. The weakness can occur at the foot, ankle, knee, hip, or even in the torso and back. The use of a training partner, a mirror, or video can help if your problem is dramatic.

Look for a box or chair that places your thigh slightly below parallel. Most normal chairs work fine and even park benches are good. The fact is, I often recommend that my clients who work in offices get out of their chairs using the pistol approach. 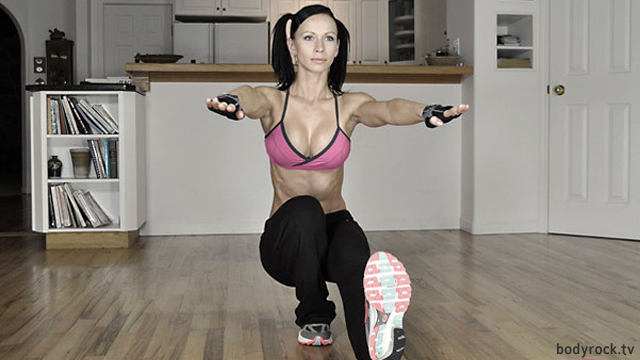 This is a high-tension exercise. There may be a difference from side to side with coordination and strength – just as you have a dominant hand, you also have a dominant leg.

While a strength difference between limbs can increase the risk of injury, so can a lack of endurance. Approaching this drill through low repetition/high set training seems to work the best. Remember, as you balance on one leg, the "roll," "pitch," and "yaw" of each joint is amplified. High levels of tension done frequently and relatively fresh will minimize shaky movement and create fluid, powerful execution.

There's a school of thought that has you doing pistols, and in this case box pistols, throughout the day; it's known as GTG or "Grease the Groove." Others don't like this approach and prefer a more focused "workout." Including them in your workout two to three times per week seems to make most people happy.

Adding weight is an interesting element. By holding the weight in your extended arms, you can effectively counterbalance your body to overcome a deficit in flexibility. It's more work for your leg because of added poundage, but easier for some who don't have optimal power to weight ratios.

There are two other options:

First, you can rack the dumbbell or kettlebell on your shoulder and adopt a more upright posture. This for some will be a gradual process due to adaptations in flexibility and posture.

Second, and perhaps the best, is a weight vest or backpack. This makes the body heavier without any alterations in leverage. That heavier body is balanced on one leg and now you're forced to repetitively box squat on that leg. So you're limiting the range of motion, but also making use of all the benefits of the classic box squat.

A well-performed pistol squat never fails to get considerable attention at the gym, but there's more to the movement than just another cool party trick to impress your friends. Give the box pistol squat a shot. You have nothing to lose and only healthy, strong knees to gain. 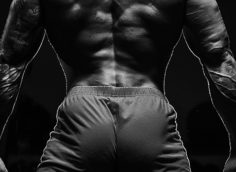 Build bigger glutes just about anywhere. You don't even have to leave the house. Here's how.
Training
Paul Carter May 19 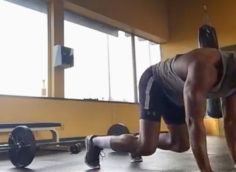 Doing this athletic movement for reps or as part of a superset makes for a great conditioning tool.
Exercise Coaching, Metabolic Conditioning, Tips
Lee Boyce June 21

For heart health, you have to do lots of cardio, right? Not really. Here's the surprising new science.
Metabolic Conditioning, Tips, Training
Tessa Gurley June 29