Consensus, especially in matters of science, can be a valuable thing. It generally means that a bunch of scientists or researchers looked at a body of research and came to a general agreement as to what's true and what isn't.

It doesn't mean they're always right. History is filled with examples of some poopy pants coming along and upending everybody's scientific apple cart. Galileo, for one, smashed scientific consensus when he came along and told everybody that the earth wasn't the center of the universe.

Still, consensus is usually as good as it gets, at least until some other poopy pants comes along. That's why the news of some consensus among hypertrophy specialists is so intriguing.

Eight giants of muscle-building science, names like Grgic, Helms, Vigotsky, and Schoenfeld... okay, I don't recognize those names either, except of course for Schoenfeld, who's one prolific son of a bitch, but regardless, these eight respected muscle scientists looked at the research regarding muscle hypertrophy and, after deliberating for 40 days on some mountain (I presume), came down off that mountain like a gang of Moseses and offered us another pretty nifty set of rules.

Their paper, published in the International Journal of Strength and Conditioning, contains the best, current evidence-based recommendations on how to build muscle. The good news? Most of it is stuff a lot of us have discovered on our own, or at least heard from the gruff, old, wisdom-spouting bodybuilding Yoda that seems to reside in the locker room of every serious gym in America.

They examined the research on each of the variables, the gaps in the literature, and then, most importantly, offered their consensus recommendations.

Here's what they had to say regarding each of them:

"Load," of course, refers to how much metal you're slapping on the bar. We usually express it as a percentage of max strength, like a 1-rep max (RM), maximum voluntary contraction, or as a specific target rep goal, like 10 RM.

Lifters can make comparable progress by using a wide range of loading zones. The trouble is, the researchers suggest, is that training with lighter loads produces more "discomfort, displeasure, and a higher rate of perceived effort" than training with moderate loads.

That's interesting. It suggests that the reason the much-ballyhooed, sweet-spot hypertrophy rep-range of 6 to 12 appears to work better than higher reps is simply because they're less of a pain in the ass to do, and as such, compliance is better. After all, doing sets of 20 – honest sets of 20 – where you work towards failure or near failure, is boring and hard.

Alternately, you could alternate training blocks where you concentrate on one particular rep-range spectrum (e.g., high reps, like 15 per set) before segueing into a training block where you did sets of 10, and so on.

Volume just means the amount of work you do, either in a session or in some other defined length of time (i.e., a week or a month). The researchers point out that it can be expressed in a number of ways, including (a) the number of sets performed in a session, (b) the total number of reps done for a given exercise, or (c) "volume load (the product of sets, repetitions, and load either absolute or relative)."

They're all legit, but the number of total sets is the most common metric used to measure volume.

The specificity of this consensus recommendation sort of threw me. The researchers actually said that we should strive for just 10 sets per muscle group per week and you can parcel them out any way you want.

divvy them up between multiple workouts.

This variable simply refers to how many training sessions you do in a given amount of time.

According to the authors, the research shows that it doesn't matter much how often you work out in a week, as long as you get in your 10 sets per muscle group. For real. Here's exactly how they wrote it:

"...there does not seem to be a hypertrophic benefit to greater weekly per-muscle training frequencies, provided set volume is equated."

That being said, however, they admit that it might be a good idea to spread out the volume over more frequent training sessions.

Perhaps surprisingly, the stateful 8 seemed to place more importance on the period of time taken between sets of the same exercise than they do on many of the other resistance training variables they analyzed:

"Evidence shows that the duration of the inter-set rest period acutely affects the RT (resistance training) response, and these responses have been speculated to influence chronic hypertrophic adaptations."

The researchers weren't wishy-washy on this one. They state without equivocation that rest periods should last at least 2 minutes when doing multi-joint exercises (squats, deadlifts, bench presses, rows, shoulder presses, etc.).

Of course, the amount of rest needed is also dictated by the "set end point." Translated, that means that you don't need as much rest if you half-ass it on your set. Balls-out sets where you rep out or get close to it, however, might require longer rest intervals, or at least a minimum of 2 minutes. 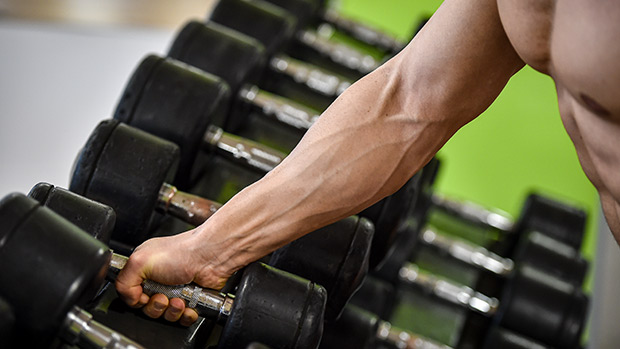 There's a lot more to exercise selection than the name implies. It, of course, involves the system used (free weights, machines, cables, stretch bands, etc.), but also the number of working joints (single or multiple) used, the angles of pull, and even the planes of movement.

Strength coach Charles Staley said something pretty smart about exercise selection once. I don't remember it verbatim, but the essence of it was this:

"If you play the same song on the piano every day for a year, you'll get pretty good at playing that song, but you won't get much better at playing the piano."

And that, conceptually at least, was what the researchers concluded about exercise selection, too. Resistance programs with hypertrophy in mind should include a variety of movements that work muscles in different planes and angles of pull. They should also employ a nice variety of multi- and single-joint exercises.

That doesn't mean you have to avoid less complex exercises, though, as the writers recommend throwing them in "liberally for variety."

Ultimately, they remind us that "exercise selection is not simply a collection of diverse exercises, but rather a cohesive, integrated strategy designed to target the entire musculature."

However, the research seems to suggest the most important factor in considering when to end the set is knowing when to fold 'em because the need to train to momentary failure is still pretty controversial in the scientific literature.

The high council pretty much agrees that novice lifters can achieve "robust" gains without training anywhere close to failure. However, as a lifter gets more advanced, the need to increase intensity appears to be increasingly important.

Veterans may benefit from occasionally taking sets to failure, but they should "perhaps limit application to the last set of a given exercise." Alternately, they might confine the use of failure training to single-joint movements and machine-based exercises.

Old or older bastards might use failure training more judiciously, as they need additional recovery times.

A viable strategy might be to periodize training to failure, "whereby very high levels of effort are employed liberally prior to a peaking phase and then followed by a tapering phase involving reduced levels of effort."

Once lifters get out of the 3 sets of 8, three times a week phase, they invariably start to seek out "advanced" training methodologies. These include drop sets, forced reps, supersets, heavy negatives, and the like.

The researchers write that approximately 83% of competitive bodybuilders recently employed some form of advanced training methods. Even so, the researchers aren't sure it's worth it:

"The present body of literature does not empirically support the use of advanced training methodologies for enhancing hypertrophic adaptations."

Still, they can't completely dismiss advanced methods. They at least are open to the idea of its occasional use as a novel stimulus, or that the methods "might appear to present a more time-efficient approach to increasing muscle hypertrophy compared to traditional training sets and rest intervals."

Yeah, But I Knew All That

A funny thing occurred to me while reading the consensus findings of the eight scientists. While I knew, by book learning, instinct, or experience that most of what they said was true or appeared to be true, I realized that I wasn't always following the recommendations they explained.

I suspect that might be true of you, too, and therein lies the value of a paper like this: to remind us what works and what appears to work so we can stop wasting time on inefficient or ineffective strategies.