Admit it. Calves are an afterthought in your program, aren’t they? Yeah, you just toss in some machine calf raises at the end of your training session and call it a day, right?

You know what? We’re not going to sit here trying to convince you that calves are worth training hard and training smart. You either want a complete physique or you don’t.

But we will say this: If you’re the guy doing nothing but three sets of ten on the standing calf machine at the ass-end of leg day when you’re already exhausted, then we don’t want to hear you bitch about “bad genetics.” Ever.

Sadly, that’s exactly how most people train calves. Even experienced lifters give up on their calf training, blame genetics, and barely hit them. It’s an easy trap to fall into because the calves are tough to hypertrophy, unless you picked the right parents.

It’s true, genetics do play a big role in calf development. “Calves are tricky,” notes Chad Waterbury. “If they’re small, no problem, they can get bigger. But if those calves have a very high insertion point (long tendon, short muscle belly) you’re relegated to building calves that will, at best, look like half a grapefruit on a Popsicle stick. There’s no way around it. But hey, that’s better than looking like a strawberry on a Popsicle stick!”

So yes, there’s a genetic “ceiling.” But you, in all likelihood, aren’t anywhere near yours, especially if you train calves as an afterthought. That’s why we’ve put together this collection of our favorite calf training exercises and routines. But first, let’s set some goals and have a quick review of “calfology.”

Calf Development and the “Perfect” Physique

According to Reeves, the neck, upper arm, and calf should be approximately the same measurement. Reeves, being 6’1″ and weighing 215 pounds, met these ideals by measuring 18 1/2 inches at the neck and 18 1/4 inches at the upper arms and calves.

Just for fun, take your measurements. How do you compare? 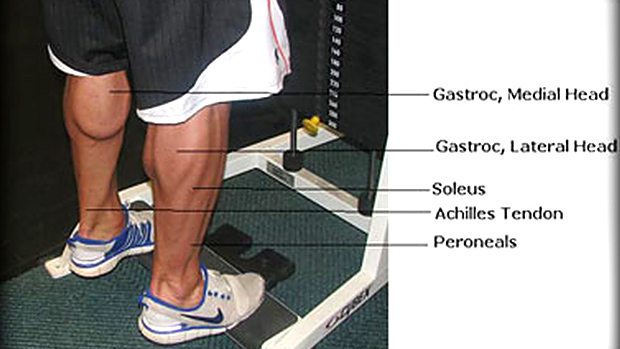 For maximal benefits, take a good pause at the bottom when you’re in the stretched position. Waterbury explains:

“Bodybuilders can benefit from dissipating the stretch-shortening cycle (SSC) in order to recruit more motor units. Once the stored elastic energy has dissipated, the muscles must work harder to lift the load.

“Stubborn muscle groups such as calves are extremely efficient at storing potential energy during the reversal contraction phase. So, if you want to build bigger calves, you must force them to work harder and not ‘cheat’ with this stored energy. Therefore, hold a calf stretch for several seconds before performing a concentric contraction.”

In other words, no partial-range, bouncy bullshit!

Enough review. Let’s get to some routines that will – as Christian Thibaudeau says – put some cut in your strut! 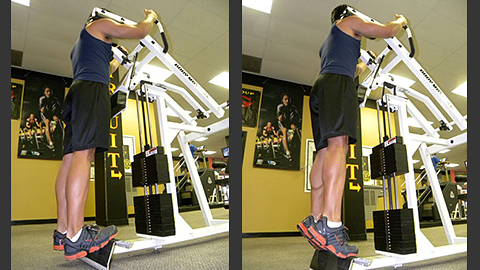 We’re not against the good ol’ standing calf raise machine; we just think most people overuse it or don’t use it in a way to maximize its benefits. So here’s a routine we learned from trainer and kinesiologist Tim Henriques that’ll put some bang back into the standing calf machine.

Talk to trainers and bodybuilders about calves and you’ll the hear the word “stubborn” come up often. The calves just don’t seem to want to grow, even if you persuade them with standard resistance training.

That’s why many strength coaches employ “shock” techniques to force breakdown and subsequent muscle growth. Here’s one of those techniques from Charles Poliquin.

“If that doesn’t make your calves grow, nothing will!” says Charles.

For those who still like to train calves at the end of their workouts, Joe DeFranco has a tip: do seated calf raises for time.

“I do seated calf raises because my legs are so burned out at the end of my leg training that I can barely stand,” admits DeFranco.

Instead of counting reps, DeFranco concentrates on doing as many as he can with good form and a controlled eccentric (negative), moving continuously for a full minute. Perform at least two sets.

The story goes like this: Luke Sauder, the alpine skier, walked into training camp one day with a new pair of calves. They were huge. So huge that he had to rush to get a new pair of ski boots molded.

Turns out that Poliquin had designed Sauder a calf program to help him avoid injuries (big strong calves result in fewer knee injuries for elite skiers).

Bet you want that program, don’t ya, pencil-legs? Well here it is!

This is a two-day routine, with 48 hours between sessions. In other words, you’re going to train calves twice in a five-day cycle. One session is very high volume, the other is heavy with a lower volume. But don’t you worry – they both hurt like hell. 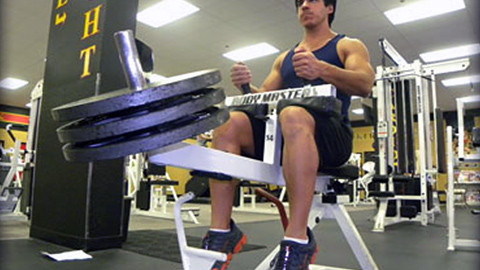 * After finishing a set of the A1 exercise, proceed immediately to exercise A2. Then rest two minutes before repeating the super set.
* * In other words, you’ll be doing one, long, extended set, resting ten seconds between each mini-set and lowering the weight in between.

“After day one, you’ll probably have to call the fire department to extinguish the fire in your calves,” says Poliquin (encouragingly?).

* The pause is taken in the bottom stretch position, and be sure to take the full two seconds.

“This routine provides freaky size increases,” Poliquin notes. “I’ve known people to gain in between 5/8ths of an inch to a full inch with this routine in as little as 30 days.”

Arnold did it by piling multiple sweaty men onto his back. But he’s Arnold, and Arnold could get away with that shit. We prefer to do our donkey calf raise this way:

Strap on a loaded dipping belt and stand on a block, toes on the edge. Bend at the waist and do calf raises. You can perform them bilaterally or unilaterally. TC can perform them tri-laterally, the gifted bastard.

“The donkey calf raise places your gastrocnemius in a superior stretched position,” notes Poliquin. If you haven’t tried this one in a while, get ready for some intense soreness, regardless of how many standing and seated calf raises you’ve been doing!

Stalled calf development is usually caused by weenie-boy training, bad genetics, or a combination of both. But let’s assume your genetics are fine, you’ve tried every calf training trick in the book, and still have stork calves. The answer could be Active Release Technique or ART.

Basically, one of the regrettable side effects of years and years of weight training is the build-up of adhesions in soft tissues. Tight fascia is also believed to restrict muscle growth, and some pro-bodybuilders have reported near-instant size gains after treating these issues with Active Release.

Waterbury adds, “I can’t count how many clients I’ve worked with who’ve benefited by fascial work. This is especially true with the calves.”

If you think you have this problem, you can do some rolling around on a tennis ball or seek out an ART® provider.

For the whole scoop on Active Release, check out our interview with its creator, Dr. Mike Leahy.

As we surveyed our strength coaches and hypertrophy experts, we noticed a common programming theme. Due to the mule-stubborn nature of calves, most all recommend high frequency training, hitting calves hard 3 to 6 times per week.

If you choose the extreme end of that range, don’t forget to take a deloading/recovery week. “If you annihilate your calves, then every fourth week cut back to training them just once to allow supercompensation to occur,” notes Chad Waterbury, who has recommended calf training up to six times per week for those in desperate need.

Remember, give these exercises and routines a try before you blame mom and dad. “Sweat often cures bad genetics,” adds editor Chris Shugart.