Close your eyes. Think about the training progress you’ve made thus far. Whatever your goals happen to be, how close have you gotten to them? Are you 65 percent there? Eighty percent? This doesn’t need to be expressed as a percentage, but I want you to conjure up some type of honest report card for yourself.

If you’re not exactly sure what those best habits and procedures are, don’t worry about it right now. Let’s just imagine that whatever it does mean, you did it for four years.

When I do this exercise myself, I must admit that I’m really not sure what the difference would be between my current self and my “ultimate potential” best self. I’d sure like to find out, though, and I believe I do know how to get there.

I’m about to share a personal assessment tool that I’ve been using for a while now but for reasons that still elude me, haven’t written about it much – until now. I want you to start thinking about your training goals (and more specifically, the process you’re using to attain them) as a big system, composed of several interrelated components.

I’ll use myself as an example: I want to be as strong and muscular as possible, and I also want to look like I possess those attributes, which means I also want to be fairly lean. And of course, along the way, I want to stay safe and healthy so I can keep doing this stuff long term.

Step One – Identify And Itemize Your Components

The achievement of these goals requires that I commit time and energy to a variety of categories, which I’ll call “components.” They include, but aren’t limited to:

Now depending on how you think, your list might be a bit different, but it’s the overall concept that’s most important here. The idea is to list every possible factor that’s involved or potentially involved with the attainment of your big goal.

The sub-step here is to remove any items that aren’t within our control. For me, my age gets deleted. Every other component is partially or completely within my control.

Now that you’ve got your itemized list of components identified, the next step is to determine which one(s) to shore up first. To do this, think about a logjam – one stuck log slows all the logs from advancing down the river.

This one log is called a “kingpin” by loggers.

The unique characteristic of the kingpin is that it’s the only log, which, when removed from the jam, restores the continued progress of the remaining logs down the river. What we need to do is identify your personal kingpin to continued progress. 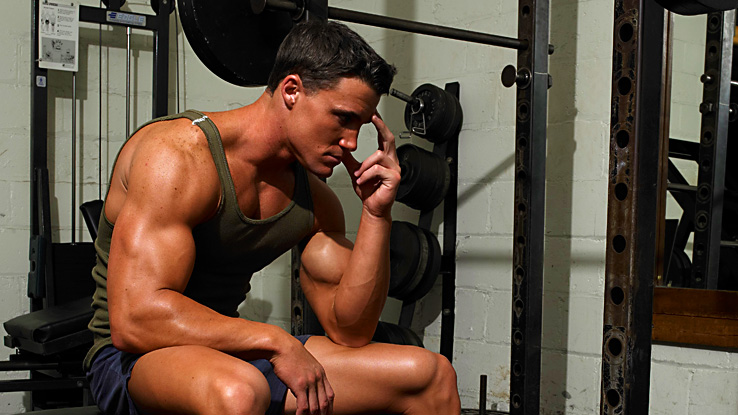 In my case, looking back to November of 2012, I ran this exact self-assessment and came to the conclusion that my kingpin was my nutrition. It wasn’t really so much that I didn’t understand nutrition, it’s that I didn’t practice it.

If I’m being honest, through most of my adult life, I’d been eating far too little protein, and probably too much of everything else. My bodyweight had hovered between 220-255 pounds for a number of years, and although I looked okay (I’m one of those guys who carries his fat in a way that makes me look leaner than I really am), I’d never been truly lean. I decided that for once and for all, I was going to be.

After doing some research, I hooked up with nutrition whiz Eric Helms and embarked upon a 12-month nutritional journey. The details of what that entailed aren’t important – what is important was that I found my kingpin to progress and did something about it.

One year later I was down to 198 pounds, with virtually no loss in strength or performance. In fact, last year I won the World Championships in powerlifting as a 198-pound lifter, and my combined total was only 15 pounds lower than the total I posted the previous year as a 220-pound lifter.

Now that I’ve given you the essential elements of the process, let’s delve into some finer points as well as a few questions.

Q: I’ve got more than one kingpin. Which one should I tackle first?

A: There are at least two ways to address this scenario and they’re equally valid depending on the context with which they’re applied. In my personal example, while I had more than one weakness in my overall preparation, I’m absolutely confident that nutrition was far and away my most significant one.

The approach I chose to take isn’t for the impatient. It took me the better part of a year to lose 20 pounds of unwanted body fat. When faced with two or more significant kingpins, there’s another possible approach that warrants some consideration.

I liken it to financial guru Dave Ramsey’s “debt snowball” strategy. If you have several outstanding credit card debts as an example, instead of tackling the one with the highest interest rate (which is how most advisors would tackle the problem), Ramsey advises to clear up the card with the smallest balance first, then the card with the next smallest balance, and so on until you’ve tackled each and every outstanding card balance.

The rationale behind this approach is that you’ll be able to knock off that smallest balance really quickly, which will fuel your motivation to move on to the second card, which you’ll also pay off fast, further fueling your incentive. That’s why Ramsey calls it a debt “snowball” – each new card that you knock off helps you gather emotional steam for the next challenge, and the next, until you’ve become debt free.

You can use a similar approach to knocking off your kingpins – the resolution of one negative factor may generate immediate energy, which makes the rest of the process that much easier.

For example, if you’re overweight and eat too little protein, immediately increasing your protein intake will improve the satiety of your meals, making it much easier to reduce your overall caloric intake, which will make it much easier to drop that weight. Once you’re leaner, you feel better about yourself. Suddenly you’re more excited and your joints feel better. In short, you started that snowball rolling down that hill, and you’ve got even more enthusiasm than ever to knock off that next kingpin.

Q: I’m not confident that I really know what my kingpin is!

A: This question is a sign of wisdom, not stupidity. True wisdom can be defined as the depth to which you’re aware of your shortcomings. Many of us think we have a clear picture of ourselves, when in fact, we don’t.

When I was a martial arts instructor, after two students would spar each other, I’d ask one student (let’s call him Steve) what he thought he did well, and what he thought he didn’t do well. Then, I’d ask his opponent (Ralph) how he thought Steve did. Remarkably, the two assessments were often quite different, and this type of post-fight analysis was very useful to my students.

If you don’t have a coach or training partner, forget about all this and tackle that problem first. But if you do have such a person, have him identify one to three kingpins from your list and see if they match your own. In other words, bring some objectivity to bear on the matter.

Q: Won’t my strengths be negatively affected by putting so much attention toward my weaknesses?

A: Not if you’ve identified the right weaknesses. After all, if for example you’ve identified orthopedic issues as a major kingpin of yours, the fact that you can’t lift hard with any consistency is hurting your strength already, and probably more than you know. Or, if your finances are so bad that you can barely afford a gym membership, let alone a decent protein intake, addressing that problem will pay off in spades in due time.

Have you ever employed this, or a similar process in your own training? If so I’d love to hear about it. Meet me at the comments section below!