The way Omega-6 fats have been demonized in the nutritional world recently you’d think they were on par with high-fructose corn syrup; without the sexy ad campaign sponsored by the Corn Refiners Association, that is.

“It’s made from corn, doesn’t have artificial ingredients, and, like sugar, is fine in moderation.”

Give me a break.

T Nation readers don’t fall for that sort of crap. We’re too smart. But why is it that whenever Omega-6 fats come up, we get on our Omega-3 high horse?

Because Omega-6 fats are “bad” and pro-inflammatory, right? Right?

We’re often quick to smash current dogma and adopt the correct counter culture belief, but how often do we smash our own dogma?

The answer: not very often.

Well, it’s time for a change.

Sometimes our counter culture beliefs are on-point, as you’ll see in the first two examples. But sometimes they completely miss the target. Let’s explore.

Let’s stop there. Could it be the Counter Culture is wrong?

Have you considered why Omega-6 fats are “bad” for you? Have you ever looked at the actual research?

I have. And it’s not all scary.

Are Omega-6 Fats Inflammation Antagonists or Not?

The origin of the pro-inflammatory/n-6 connection can be traced back to fatty acid biochemistry and their role in the production of PGE2, an eicosanoid (a short-lived hormone-like compound) that has pro-inflammatory actions. As shown in the image, linoleic acid (soybean oil, corn oil, but also nuts and seeds) and arachidonic acid (eggs and meat) can both be converted to PGE2. That makes sense. But does it really happen? 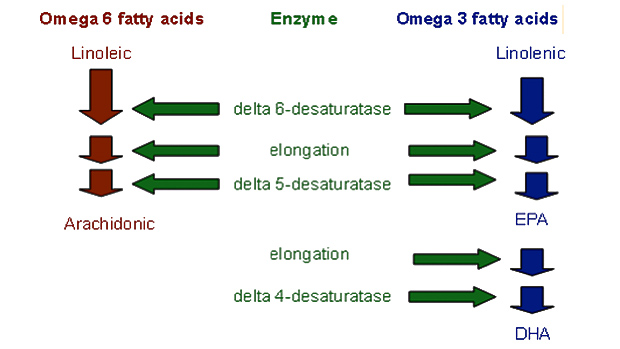 It’s also not the most efficient biochemical pathway.

Now if that linoleic acid eventually does get converted to arachidonic acid you’d be in trouble, right? Your joints would probably catch on fire, you’d get inflammatory bowel disease, and rapidly start developing dementia.

In fact, arachidonic acid plays an extremely important role in the body. As Dr. Jeff Volek pointed out to me a couple months ago, arachidonic acid is one of the two main fatty acids that infant formulas are fortified with (the other being DHA). The body also seems to tightly regulate and conserve arachidonic acid levels. It also stimulates Testosterone production.

So clearly it has to have some benefits.

The Truth About Inflammation

With all the talk about corn oil, inflammation, and arachidonic acid, one omega-6 fat is always passed over: Gamma-Linolenic Acid, or GLA. 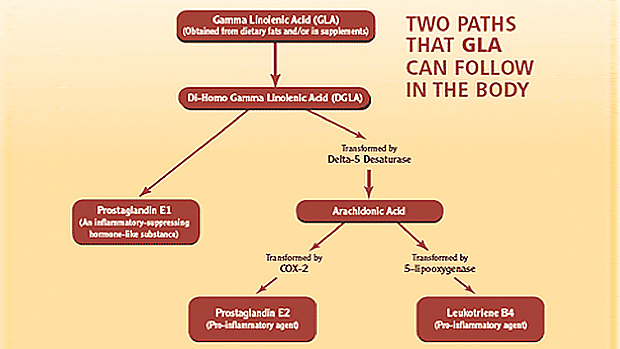 One of the main reasons GLA is overlooked may be due to the fact that it’s damn near impossible to get it in our diets. I mean, when was the last time you doused your salad with borage seed oil or evening primrose oil?

I find it interesting that there isn’t a large body of research looking at the effects of GLA (apparently the Evening Primrose Council isn’t funding a lot of research), but here are findings from several of the GLA studies that have been completed:

Another interesting point regarding arachidonic acid is that it has a biochemical fate that we didn’t know about until just a few years ago. (Many people still have never heard of about this.)

Arachidonic acid can also be converted to a new class of compounds called Lipoxins and Resolvins. Theses compounds are called “novel lipid mediators.” What’s interesting is that they don’t stop inflammation, but help clean up the mess left by inflammation like a janitor at your local high school.

One Final Point on Good vs. Bad Fats

More research is looking at the effects of fatty acids on health, and it’s becoming clear that the omega-6 = bad mantra is naive and flawed.

Here’s one last example to illustrate this point: a recent study was completed with the goal of seeing if a person’s fatty acid profile could predict their ten-year risk of developing heart disease better than the current standard Frammingham Risk Score.

It turns out that it does. Do you know what fatty acid carried the most weight? You guessed it: linoleic acid, an omega-6 fat.

In fact, of the eight fatty acids that surfaced as being beneficial in this analysis, three were omega-6 fats and only one was an omega-3 fat.

So start taking some GLA and hop off the Omega-6 hatin’ train. You’ll be doing your body a favor.