What would you give to have delts so big and wide that you had to strip naked and coat yourself with lard before being able to pass from room to room? Perhaps you're thinking, "Don, I'd sacrifice a certain very sensitive part of my reproductive system for great delts!" Well, don't. You may need that fellow someday and besides, you can have strong, torqued-out shoulders without losing "lefty."

If you're a competitive bodybuilder, "triple-decker" delts are even more important. After studying piles of pictures and video, my colleague, bodybuilder Justin Stange, pointed out that the rear double biceps is the single most influential pose at the local and regional level. Why? It has little to do with training. His hunch relates to the experience necessary to develop the "eye" for anatomy.

See, we know it takes at least a half dozen years to master skinfold calipers, so why should judging anatomy be different? The judges have only seconds to weed out the winners and it's difficult for them to make decisions based only on the front poses due to the variety of shapes and heights. The rear poses are what really make each competitor stand out.

The moral of the story is that whether you're a competitive bodybuilder or just a guy who wants to have a strong visual impact when he walks into the room, the delts are what's going to set you apart from the rest of the pack. Let's get to work on yours!

You heard it here first! Based on recent research, the muscle's geometric shape and arrangement are more vital to muscle building than the highly touted fast-twitch muscle fiber. The concept is called "muscle architecture." A muscle's shape determines its functional capabilities, particularly the range of muscle shortening, power and strength.

A "pennate" muscle pattern means "feather like" and describes the grain or the arrangement of the fascicles as they insert into the tendon. Dense-fibered, multi-pennate muscles like the shoulders are powerful, very short sliding muscles that have a high work tolerance. (Note: "Power" as used here is related to acceleration, velocity and plyometric effects. Power doesn't mean strength in this context.)

Contrary to what many bodybuilders contend, steroid-free trainees must use copious amounts of tension and volume to build boulderous shoulders. The reason that the low set or no-set shoulder mentality perpetuated can be explained by a recent study on pennation angles.

After studying 637 women and men, including untrained people and highly trained bodybuilders, the study confirmed that "hypertrophy (muscle size) is accompanied by an increase in pennation angle." The researchers go on to conclude, "It has been shown that muscle architecture considerably influences the force-producing capacity of the muscle, having sometimes much greater effect than that of the intrinsic properties such as fiber composition." (Yasuo Kawakami et al. 2000)

The bottom line is that training experience and anabolic steroids independently increase pennation angle and mass. Steroid-using trainees will develop pennate muscle mass quickest. This includes shoulders, triceps and quads. I believe this is why bodybuilders traditionally performed little shoulder specialization. Of course, since they never had to, they never figured out how to. This spells opportunity for innovation.

So how do we use the muscle's very unique qualities to build demonic delts? Remember, mass gains are a result of more work produced by the muscles and work is increased with load, volume, and range of motion. Let's break that down.

Load – What we need to do is turn the delts' elastic power into more weight lifted. This is achieved with a concept known as titanic facilitation. Don't let the fancy name intimidate you; anyone who's swung a bat, ax or stick has already used it to a degree.

Preliminary isometric tension has a positive effect on subsequent dynamic work. Dynamic work usually increases by up to 20% more than work done without preliminary isometric tension. In other words, if you lock out and hold a super heavy weight and then go back to a typically maximum weight, you'll instantly be able to handle 20% more! You don't have to understand it to use it, just understand that it works. Big time!

But this is old news. The new news is that it works better in muscles with greater pennation. Coincidentally, shoulders have the most!

Volume – When teaching delt specialization, I refer to the bricklayer story. Have you ever seen a bricklayer chip a brick? They strike it repeatedly with their mallet at very precise angles. The funny thing is, strike after strike, nothing happens. Then, finally, the brick breaks. The same is true with delt training.

Because of the slow-twitch make-up and the fact that the fibers contract only a fraction of the length they do for other muscles like the biceps, you have to use what I call multiple angulation, an alternative type of drop-set training. An anglulation advantage set drops or raises the angle from least to most advantageous as fatigue sets in. You'll understand more clearly when you get to the exercise prescription section.

Contraction Range – In order to achieve the minimal work threshold of 50,000+ k.j. required for increases in free and total Testosterone, GH, IGF-1 and other anabolic hormones, you must choose long joint range exercises.

Now, let's put all of this together into a delt specialization program!

Perform the following routine three times per week for four weeks or until you blow out the neckline of your dress shirts.

This is when we have fun with physics. Use a partner or any passerby with this one. This exercise is performed supine with the bench aligned equidistantly between the high pulleys. Grasp the handle attachment with the opposite arm, i.e. right hand grabs the left pulley. Choose a weight approximately 30% more than you'd typically handle.

Lie flat on your back and have your partner assist you as you externally rotate and extend the shoulder joint to its end range. Hold this end range for eight-seconds isometrically and then repeat this for a total of four, eight-second isometric reps. After shaking violently for a count of four, hustle over to the dumbbell rack to perform the next exercise. Your shoulders are now coiled springs ready to unload!

Load: Increase the weight by 5 pounds each set

The previous exercise has now enabled you to handle more weight and with greater range of motion. Grasp two dumbbells and stand in a bent over, knees flexed, arched back position. The neck is neutral with the head propped on the top of an incline bench.

Next, position the elbows extended, wrists pronated and directly under the pecs, narrower than shoulder width. To contract, rotate the wrists and arms laterally (externally), flex the elbows slightly and extend the shoulders to their end range. The elbows will assume a 110 degree angle at mid-point. Hold this mid-point briefly before lowering the dumbbells to the initial starting position.

Load: Increase the weight by 5 pounds each set

The next two exercises (B and C) make up the angulation advantage set mentioned earlier. Using an adjustable incline-to-decline bench that has six or so bench angles, start the set at a decline. Perform the indicated number of reps, rest only as long as it takes to elevate the bench angle one notch, then perform another set. Due to fatigue, you'll get one or two less reps per bench setting, so plan on hitting failure from set three and up. This will gauge your loads just right.

Note: If you don't have a bench that goes from decline to incline, you might be able to use separate decline and incline benches sitting close together. Just hop from the decline to the incline when appropriate.

B) Decline to incline L-lateral raise

This exercise will effectively recruit all three deltoid heads. Grasp a dumbbell with a semi-supinated grip. Prop yourself in a side lying position on the incline/decline bench. (You may have to experiment with positions). Bend the elbow to 90 degrees.

Concentric step #1: Horizontally abduct the shoulder until the humorous is parallel to the floor.

Concentric step #2: From there, externally rotate the shoulder until the humorous is perpendicular to the floor. Reverse these steps to lower the load.

If you don't know what any of that means because you don't read Gray's Anatomy for fun like I do, just do what I'm doing in the pics below!

Sets: 6+ depending on the bench manufacturer. Perform each bench angle from decline to incline one time.

Rest: 15 seconds between each angle

This is my secret weapon for busting through bench press plateaus. See, many times a trainee has plenty of serratus anterior and delt strength, yet sticks at the mid-position of the bench press. This is due to lack of coraco brachialis strength. This is a stabilizing band that fixates and stabilizes the transfer of force between the posterior and anterior shoulder rotators.

This exercise is performed supine with the bench aligned equidistantly between the low pulleys. Set the bench at a slight decline, about 10 degrees, and grasp the handle attachments. Start with the humerous in full lateral (external) rotation, elbows extended and palms supinated. Next, flex the elbows and medially rotate the humerous. Reverse these steps to lower the load and elevate the bench to its next setting.

Sets: 6+ depending on the bench manufacturer. Perform each bench angle from decline to incline one time.

Rest: 15 seconds between each angle

Grasp a barbell with an underhand (supinated) regular-width grip. Flex the knees slightly and start with the bar resting at mid thigh level, elbows at 15 degrees of flexion.

While maintaining elbow flexion, flex the shoulders by front raising the bar overhead. The movement should be explosive and smooth. At midpoint the bar should be positioned in vertical alignment with the ears, hips, and ankles. Reverse this pattern to return the weight under control to the starting position.

This one isolates the teres major. Grasp two dumbbells and stand in a bent over, arched back position. The neck is neutral with the head propped on the top of an incline bench. Next, position the elbows extended, wrists semi-supinated and wider than shoulder width. Begin by extending the shoulders and rotating the wrists and arms medially (inward). Hold this mid-point briefly before lowering the dumbbells to the initial position.

No, these aren't your usual delt exercises, but they'll get the job done with surprising efficiency. Try this program and see for yourself! 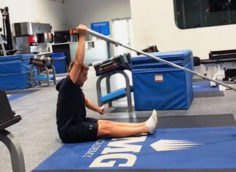 The Z press is the ultimate exercise to test your ability to keep your posture while pressing something overhead.
Exercise Coaching, Overhead Press, Tips
Braden Welsh August 11 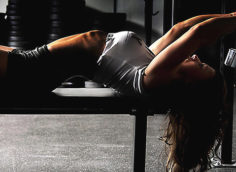 Use this common accessory for pullovers and it'll build your upper body like nothing else.
Back, Bodybuilding, Tips, Training
Tom MacCormick August 30 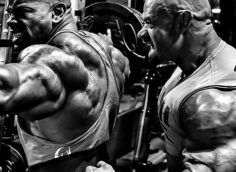 Meatheads were right about a lot of things, but they got a whole bunch of other stuff dead wrong. Let's break it down.
Bodybuilding, Training
Calvin Huynh April 4