This is one of the first "high stress" methods that newbies learn when starting to lift weights seriously. Unfortunately, most people use supersets the wrong way, pairing movements without any thought about the logic behind the pairing.

A superset is when you perform a set of two exercises back to back, without resting between them (you do rest after the second one, however). There are several smart ways to do them.

This refers to pairing two exercises for the same muscle group. The first one is an isolation movement (an exercise where the target muscle is doing most of the work alone) and the second one is a compound movement. An example for the chest would be to perform a set of dumbbell flyes, then immediately a set of bench press.

The logic here is that in a compound movement, the target muscle isn't working alone and thus might not be fully stimulated at the end of the set. Pre-fatigue the chest with an isolation movement and you'll feel the pecs much more in the bench press, which will help teach you how to focus on that muscle. The downside is that you won't be able to use as much weight in the compound exercise, which is also the best mass builder of the two movements.

Here the exercise order is reversed: you start with the compound movement and then perform the isolation exercise. This also allows you to fully stimulate the target muscle, but it doesn't interfere with the amount of weight you can use on the big exercise.

This is the type of superset I like the least, and I rarely use it. It consists of pairing two compound movements for the same muscle group (e.g. bench press and dips). The problem is that it doesn't help you to focus on the target muscle group.

In the case of bench press and dips, if your triceps are stronger than your pecs, you'll still rely mostly on them during both movements, and the chest might still be left relatively under-stimulated. The only advantage to a compound superset is that you can work more than one part of the muscle in the same set. However, this is better accomplished with isolation movements.

This refers to pairing two isolation exercises for the same muscle group. The purpose is to focus on several parts of a muscle at the same time. For the biceps, that could be an exercise that focuses mostly on the long head and one that focuses on the short head.

This is where it gets tricky. For this technique to work, you have to select exercises that actually work different parts of the muscle. If you choose two movements targeting the same area, you're not getting full value from this technique.

In this method you pair two exercises for opposing (antagonist) muscles. As with other supersets, there's no rest between the first and second movements. With this approach, you can pair these muscles together: 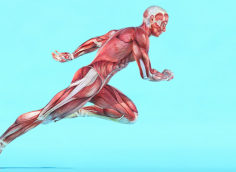 Five reasons to start sprinting today, plus a 6-week plan to get you started.
Training
Charley Gould January 21