Most of the time, I can't help but smirk – and then spit – when some Instagram fitness coach reveals the "best" exercise for this body part or that body part. What they call best is most likely the one that feels good to them personally, or the one that makes their ass look all perky and inviting in the video.

It's like that old bit from "The Office" where Jim, in an effort to goad Dwight, tells him "black bears are best," causing the indignant Dwight to counter with the various attributes of polar bears and grizzly bears.

It's plain silly because someone else, me for instance, could insist that Malayian sun bears are the best, if only for the fact they look like they're wearing a gold-colored Ruth Bader Ginsburg doily around their necks.

The point is, bear preferences aren't based on science and neither are most exercise preferences. However, we can sensibly use electromyographic (EMG) evidence to assess the effectiveness of an exercise. That's where they wire you up like an old VCR and measure the activity of the muscles involved in a particular exercise.

Granted, the procedure isn't foolproof as people, as similar as they are, still have distinct physiological traits that may invalidate a "best" exercise. Even so, EMG studies are probably the best tools we have in evaluating the merits of various movements.

That's why a new study that set out to figure out which lateral raise movement was the best caught my attention, especially when I read that the version that's generally considered the most awkward and potentially the riskiest was the best.

That potentially risky version is the internally rotated lateral raise (where your thumbs are down), sometimes known as "empty can" lateral raises.

Unlike most weight lifting studies, this one used actual meatheads. All 10 participants had participated in a regional or national bodybuilding contest in the previous five years. To avoid possible "confounding factors," all were from the same weight class.

The meatheads were then required, on separate occasions, to perform 6 reps (2 shy or their 8RM so that fatigue wouldn't interfere with EMG signal) of the following lateral raise variations:

They also tested the recruitment patterns of the front raise, just for grins. 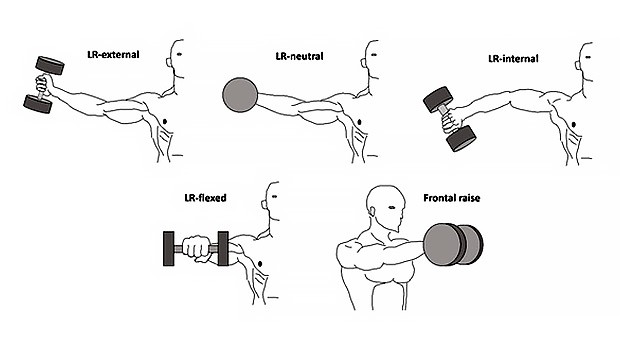 To no one's surprise, each variation had unique muscle recruitment:

Nice, but the thumbs-down version activated not only the posterior delts, but also the anterior delts, the upper traps, and the triceps brachii (which stabilizes the elbow).

If increasing the size of the medial delts is your main objective, stick with heavy doses of neutral-grip lateral raises and do them with your arms extended fully to the sides – none of that arms bent to 90 to 110 degrees crap.

Hell, if a chicken were to attempt to fly with his limbs bent, he'd never get off the ground. Sure, I realize chickens can't fly that well in the first place, but neither can you, so stick with the straight-armed version.

As far as being the most bang-for-your-buck version of the lateral-arm raise, it seems that the somewhat awkward, rarely seen thumbs-down version recruits the most sheer muscle, calling on not only the anterior delts to assist, but also the posterior delts, upper traps, and even the triceps.

Be careful when you try it, though, as the reason this movement is rarely seen in the gym might be because it's "riskier" than many others and may lead to injury if you go nuts on it. Start out with light weights, relatively speaking.

Is it really a bad exercise? That depends on your posture and your overall training history.
Exercise Coaching, Mobility, Shoulders, Tips
Tom Morrison May 18
Q & A with John Paul Catanzaro
Training
John Paul Catanzaro May 14 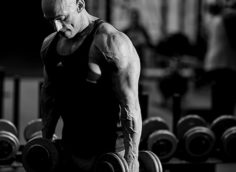