Sure, battle ropes and sled work are great forms of metcon, but let's focus on something most people have access to: stairs or a stairmill at the gym.

And we're not talking about the stair-stepper your mom bought at Target. We're talking about that big revolving set of stairs from hell that makes even treadmill jockeys suck wind and hate life.

What's awesome/awful about the stairmill is that there's no way to sandbag it. If you go slow, you get a longer concentric action, making your muscles burn, scream for oxygen, and work harder. If you crank up the speed, your heart and lungs have to work double time. Fast or slow, your butt gets burnt.

Just 15-20 minutes 2-3 times per week will really improve your conditioning. And because there's little to no eccentric (negative) action, this won't interfere with leg day.

Too easy? Do this:

Outside the gym, take the stairs as often as possible. Climbing just eight flights of stairs a day has been shown to lower average early mortality risk by 33 percent. And people who live in a house with stairs are generally leaner than those who don't, even if they do no other forms of formal exercise.

Not only is this a great form of NEPA (non-exercise physical activity), a study in the journal Neurobiology of Aging showed that people who take at least one flight of stairs each day have "younger" brains, defined by having more gray matter, than other folks their age.

A younger brain, a younger looking butt, and the ability to tackle your next EMOM workout without tanking? That's hard to beat.

Advanced lifters know that leg drive is key for hitting a new PR on the bench. Here are 5 tips to maximize it.
Bench Press, Powerlifting & Strength, Training
Tony Bonvechio September 11 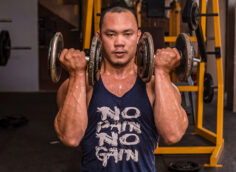 If the Arnold press and the push press had a baby, it would look like this great exercise variation. Give it a shot.
Overhead Press, Shoulders, Tips, Training
Calvin Huynh March 21
How to Maximize Efficiency in the Gym
Training
Joe DeFranco February 20