Here’s something nobody’s ever told you before: Your technique is keeping your back small. Sure, we could talk about exercise selection, reps, sets, and frequency, but these factors are largely irrelevant if you don’t understand the back muscles and what adjustments to make to really hit them.

If you want to actually gain some size on your back, there’s a hell of a lot more to it than deadlifts and pull-ups. 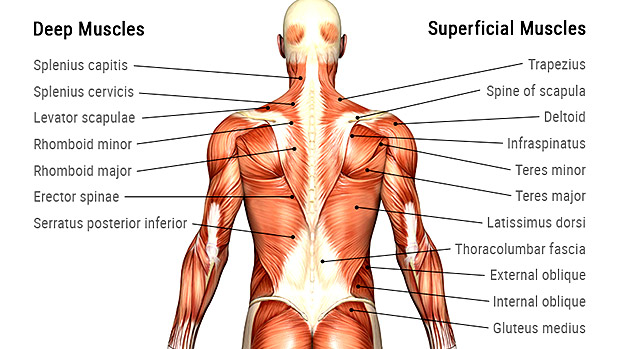 Thick and Wide: The Muscles

When people talk about building the back, they mean choosing exercises that build thickness or width. But what do those even mean? We need to differentiate between them and see which muscles create each effect. The characteristic you need more (thickness or width) will determine your best technique.

The muscle responsible for creating width is the latissimus dorsi – the lats. It originates from the spine, where the fibers fan upwards and insert into the humerus.

The muscles primarily responsible for creating thickness are the upper back muscles: teres major, rhomboids, traps (upper, middle, and lower), and the posterior delts count here too.

The path your arms take – flared versus tucked in – during pulling exercises will determine which back muscles get hit more. So if one area of your back is taking over (keeping you from building another area) you can change your arm path and focus in more on what you’re wanting to build.

The type of grip you’re using will play a role in arm path. It doesn’t wholly dictate it, but certain grips will make arm path more natural than others depending on what area of the back you’re trying to isolate.

A supinated (underhand) grip will lend itself to keeping the arm path in close to the body, which will tend to bias the lats more. A neutral grip tends to do the same, but can also be used to hit the teres a bit more. 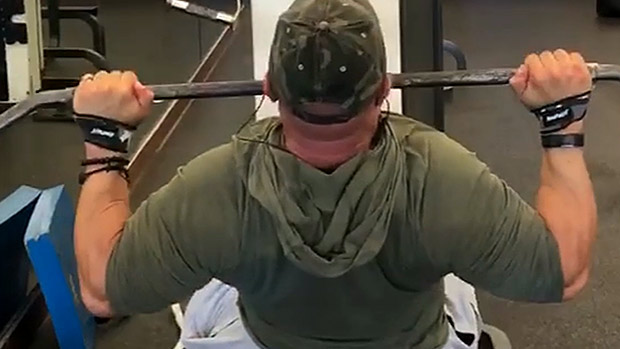 A pronated (overhand) grip will be most commonly used to hit the muscles of the upper back because it’ll naturally lend itself to a more flared arm path.

A closer grip or shoulder-width grip is usually more ideal for targeting the lats. A wider grip can be a great option for the upper back, especially when doing chins or pulldowns. It can cause a bit more abduction of the humerus.

That said, one reminder is to have elbow-to-wrist alignment when you’re in the fully contracted position of a pulling exercise. It’s a great overall position for the joints to be in to fully maximize the area of the back you’re trying to bias and can keep you from compensating with other muscle groups.

Building a Wide Back

Let’s talk about the lats. Since they attach to the spine, then fan upward to the humerus, it should make sense that to fully lengthen and shorten them, and work them in line with the fibers, the arms need to begin in front of the body (lengthening the lats).

From that position, you want to take an arm path where you initiate the pull by driving the arms down and bringing the elbows in towards the hip (shortening).

When you focus on this execution principle, you’ll understand that a row, depending on how it’s performed, can actually be a dominant lat movement rather than an upper back movement. Various row machines can be used to bias the lats rather than the upper back if that’s what you’re wanting to do.

The way you do a pulldown will also dictate which area of the back is working with the greatest amount of tension. Even though pulldowns are traditionally known to hit the lats, if you’re not doing them right, they’ll do more for the upper back. So keep the narrow or neutral grip in mind, and remember to keep the arm path in front of you.

To Arch or Not to Arch?

To hit the lats, brace with the abs rather than extending the lumbar spine (arching the lower back).

You’ve probably read that to get a full lat contraction, you need to arch the lower back. You even see pictures of guys with huge backs using an arch when doing pulldowns. It’s not a bad technique, but it doesn’t preferentially build the lats.

Why? Because it actually takes away from fully shortening the lats and will decrease output by them, creating more engagement in the upper back. So instead, brace with the abs to create more stability by maintaining a neutral spine. It’s in the neutral spinal position that the lats can produce the greatest amount of output and contract maximally.

Building a Thick Back

Let’s take a quick look at a pulldown variation that targets the upper back, also known as the “lat-less” pulldown.

Here’s a machine row that mimics this arm path, biasing the upper back.

The main exercise the average gym bro uses is the bentover lateral raise. But this particular motion doesn’t fully shorten the fibers of the posterior delts. The rear delts are strongly involved in both shoulder hyperextension and transverse extension. That’s where the rear delt magic happens.

Consider the rear delt row. To get the rear delts fully shortened, you actually need to go into shoulder extension, where the elbow comes as far behind the body as possible, without the shoulder rolling forward.

There’s a higher ceiling for loading with these. The more loading you can use, the greater potential for growth, so long as you use proper form.

A function of the rear delt is also external rotation. That’s why the rear delt dumbbell row with a supinated (underhand) grip is also a good choice.

What About Barbell or T-Bar Rows?

These are still excellent, but they require a lot more internal stability and intramuscular coordination.

When I see people doing these, there’s a significant degree of body English involved where the initiation of the load comes from hip movement. Then they slam their upper body down towards the bar or attachment. This places a lot of stress on the lower back and a lot of tension on the connection tissue.

You can include them but do them last in the training session. This way you can still get an optimal training effect without super-heavy loading.

One More Thing: Stop It With the Deadlift Delusion

Standard deadlifts from the floor aren’t a great exercise for back hypertrophy. They neither lengthen nor shorten any of the musculature of the back. The muscles of the back just work in an isometric fashion to hold the spine in place and keep the loading at mid-foot.

From a tension standpoint, the first half of the movement is dominated by the glutes and hamstrings. As the bar comes over the knees and you have to pull it into place, it’s the hip extension that does so, with (once again) the back working in an isometric fashion.

The scapula does go into a bit of retraction, but this can be accomplished by eliminating the bottom half of the pull, more or less, and doing rack or block deadlifts. Add bands to these to really hit the upper back.

If back hypertrophy is your goal, then skip the conventional deadlifts from the floor.

Deadlifts are also the most systemically taxing exercise. Think about this – a huge factor in making long term progress is to minimize systemic and neural taxation, while maximizing muscular stress. So why would you choose a movement that maximizes neural and systemic stress, and minimizes muscular stress on the areas where you’re trying to stimulate growth?