For those that may be confused by this, Mike Mentzer was one of
the original HIT guys. One set, heavy and hard. When I read Jason
Ferrugia's stuff I realize that this may in fact be the way to
go. We never do more than three sets of an exercise anymore. Even
three sets for beginners.

2. I thought Functional Training was a good idea. Now the
functional people mostly aggravate me. Functional training is now
about waving 5-20 lb dumbbells and is generally practiced by those
who know little about training.

Functional training is a great concept to hide behind when you
don't know anything about real training. A good idea gone bad
in the wrong hands. I think the half-baked execution of functional
training might just save the machine people from extinction.
Hurt enough people doing stupid stuff, they will all go back to the
safety of machines.

By the way does anyone know if you can change a book title? I
know Charlie Francis did it. Not sure if my reasons are as good as
his but, I would love for my first book to now be known as Training for Sports instead of Functional Training for
Sports. Either that or some of the functional training people
should read the book so they might realize what functional training
really is.

I'm back to work capacity. Vern Gambetta was and still is
right. Forget physiology and energy systems, just figure out the
game and train for it.

As for fitness, if you listen to the "accumulate 200
minutes a week" folks, prepare to quit your job. Who has that
kind of time? Once you're healthy enough to exercise, exercise
hard. Walking is a waste of time, so is jogging. Run intervals if
you have no joint issues and reasonable body composition. If
you're overweight or have any lower extremity problems, buy a
Schwinn Airdyne and ride intervals. Long steady state work is for
recovery days only.

If you're an endurance athlete please try to ignore me.
I'm not talking to you. When you get hurt, just remember
I told you so.

4. I thought I knew something about speed development. Loren
Seagrave had a great line the other day. You know what the best
exercise for sprinting is? You guessed it, sprinting. Let's do
more sprints and less silly track drills to make ourselves better
at sprints.

5. I thought Paul Hodges and the Australians were right about
the draw-in (sucking in the gut when you lift). Now I think Stuart
McGill is closer to right with the brace. I think Shirley Sahrmann
has always been pretty right.

I also realize none of this matters much if you find a way to
keep your core stable. My advice? More front and side planks. When
they get easy, progress them. Elevate the feet, etc. Forget the BS
about squats and deadlifts being enough core work. McBride's
research invalidates the thought.

6. I thought Convertaball Twists were stupid. Then I saw Stuart
McGill use them as a stability exercise. Now I think they're a
good exercise and realize Stuart is smarter than me.

7. I used to think the Landmine (Alwyn Cosgrove says
Testosterone readers know it as the grappler) was stupid. See
above. Core training may just be more about the preventionof
motion than about the creation of motion.

8. I thought more people got it. Then I wrote Is Rotation a
Good Idea and A Joint by Joint Approach to Training. Now
I'm not sure if people can read. I didn't say don't
rotate, I said don't increase ROM at joints that need
stability. Then I said increase ROM at joints that need mobility.
Lets look at the simple analogy. Increased ROM at the knee is
called an ACL tear. Why are people struggling with the lumbar spine
idea?

One thing I know, a person with an agenda will focus on only
what he or she wants to read and then will argue the minutia.
People should focus on the point of an article not read it to find
a flyspeck of disagreement.

9. I thought Ab Wheels were dumb. Now I think I'm dumb and
out about $100 bucks. I threw all my Ab Wheels away. Now I have to
buy them again. The functional guys have sold me on a few things;
one is that the function of the anterior core is the prevention of
extension. Now I love Stability Ball Rollouts and progress to the
Ab Wheel. Luckily they only cost ten bucks.

10. Dan John was so right about One-Arm Dumbell Bench Presses.
Check out his last article. Side Note: Dan John is usually right
about most stuff. Pay attention when he writes.

11. I used to think hang cleans were a great exercise. Now I
think close grip hang snatches are a better exercise. No
flexibility issue to contend with. Less load. More Speed. All
positives in my book.

12. I used to think everyone needed to learn to squat right
away. I still do. However, we've moved squat technique into
our warm-up and are using back split squats to be able to load
heavier, sooner.

I have lots of athletes who can back split squat with more
weight and with better form than they can squat. We do overhead
squats and Gray Cook's Squat progression in our warm-up to
learn to squat. I can't wait 4-6 weeks to begin loading.

13. I used to think that chin-ups were more important than rows.
As with all of the above, I'm no longer so sure. I love TRX
and Jungle Gym Inverted Rows. Lats, rhomboids, low trap and rotator
cuff! Now that's a bang for your buck exercise.

15. I think we should all switch to free range beef. Did you
know that grass fed beef has as much good fat as salmon?
Whoda' thunk we'd screw up something as simple as
meat?

Bottom line. It's like the X Files. Trust no one. Maybe
Moulder was right. 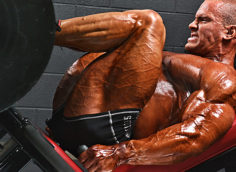 Ramp up the tension and slap some new muscle onto your legs with this little trick.
Bodybuilding, Legs, Tips, Training
Dre Delos Santos December 16