The life of a magazine editor is often hectic. Between all the impromptu one-on-one trash-can basketball games, the occasional casting couch audition with some aspiring fitness model, and, oh yeah, editing and writing and stuff, there often isn't as much time to work out as I'd like.

Sometimes, I don't have more than say, 15 minutes to spend in the gym. Pathetic, I know, but 15 minutes is always better than no minutes at all.

This is when the old saying, "necessity is the mother of invention" comes into play.

Let's say you want to get a whole-body workout in, one that includes some powerlifting moves, some bodybuilding moves, some calf work, and even a little aerobic conditioning. Doing all that in 15 minutes sounds implausible, but I've come up with a nice little 4-exercise, all done in sequence without changing a single weight, combo that does all that.

All you need is an Olympic bar (and some plates, of course).

Begin with what we call a push press. This is simply performing a standard overhead barbell press, only you use controlled "cheating." Take the bar out of the rack, position it in front of your neck. Then, bend your knees and dip down and with an explosive push, drive the bar completely overhead while straightening your legs. In fact, drive it so hard that you come up on your toes.

Slowly lower it (over a count of 5) to the start position – along with your toes – and repeat until failure.

When you can't do anymore, segue immediately into front squats where you cradle the weight in front of your neck. Given that the weight you used is probably a lot less than what you might normally use for a front squat, we'll have to slow up the tempo considerably. As you squat down to at least parallel, do so over a count of 4. As you reverse the movement, though, do so explosively. In other words, your tempo is roughly 411.

Without resting, immediately drop the weight down to your knees and bend over so that you can segue into bent-over rows. Whether you want to use a wide grip or a narrow grip is up to you. By this time, you probably won't be able to pay much attention to tempo, so just do them by hook or by crook, still paying attention to form, though.

And lastly, again without resting, put the bar down, assume an over-under grip, and finish off the combo with traditional dead lifts. True, the weight is no doubt much lighter than what you might ordinarily use, but at this point, you're probably sucking wind and the barbell will seem like it weighs 500 pounds.

Fall on the floor, make convulsive noises for two or three minutes, and then repeat the combo. In fact, you should be able to do the combo 3 times in the 15 minutes you've allocated yourself.

While I don't encourage anyone to base their entire program on this particular combo, it's rather elegant in that it works practically every muscle group – calves, thighs, hamstrings, glutes, spinal erectors, obliques, abs, back, traps, chest (via the push press), shoulders, biceps, and triceps – to some degree.

And that's pretty cool, especially if you only have 15 minutes to work out. 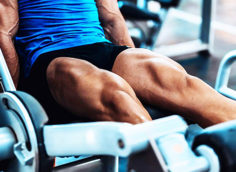 The trap bar deadlift is one of the most effective exercises you can do for building the whole body. Here’s why and how to put it to work.
Bodybuilding, Deadlift, Powerlifting & Strength, Training
Adam Vogel January 24

A grab bag of tips for bodybuilders, strength athletes and more. Regardless of your sports calling, you're guaranteed to find something useful here.
Athletic Performance, Powerlifting & Strength, Training
Jeremy Frisch October 2