As I sit here in the airport reflecting on my recent trip, I'm once again exposed to the reality that most Americans just don't move. At least not under their own power. Mostly we just like to sit motionless. I sometimes look for the guy holding the gun, for surely some type of "holdup" must be going on.

Earlier in the day I was walking down the street and some kid on a "razor" scooter puttered past me. I looked on with approval – hey, I used to skateboard everywhere – until I noticed the engine at the scooter's base. I was reminded of that commercial from not too long ago wherein a cool-breeze scooter guy putters from his door, down the street, and right into the elevator of his office building.

As the commercial progressed and he rode up to his office cubicle (which, again, was actually presented as cool), I used to wonder if some kind of butt-forklift was going to appear, hauling his utterly sedentary butt right over to his comfy office chair. The dude must have thighs smaller than my arms due to disuse atrophy. This is what society has come to. And we wonder why 60% of us are over-fat and fully one-third of us are actually obese!(2)

Let's take a look at the modern day facilitators of weakness that I kept coming across in the airports:

• Golf cart type shuttles (not just for the handicapped anymore!)

• Wheels on even the smallest of luggage

You get the idea. Have you ever turned down a valet and gotten a snide glance – just for being man enough to carry your own stuff? I suggest we might as well have fun and roll with it. Try replying, "No thanks, I like the delt pump I'm getting" with a totally straight face. He will, of course, think you're crazy. But who's crazier in the long run – the bean bag chair of a man next to you who "properly" hands over his bags – or you?

There's no limit to the social processes and devices we invent to avoid physical movement, despite our genetic programming to do just that. Have you seen the attempts by the Feds to "sell" physical activity in their "Verb" commercials? Yes; it's really come to this. The days of kids actually going out to play "just because" appear to be gone. I vividly remember being a kid. We didn't need a commercial to urge us to leave the bloody living room!

And yet we are told by certain authorities to shrink meal size and exercise constant portion control to stay lean.

Fussing and fretting over 3-ounce steaks and postage stamp-sized pieces of cake seems preposterous to me. I'm a man and I'm going to unapologetically eat like one. Here's an alternative. Get off your fat arse. It takes true strength of character to accept the truth when it hurts – and even more guts to actually do something about it.

Hey, if the "manzier" (or "bro", if you will) fits, wear it. In fact, here are some verbs for the T-man: walk, lift, mow, trim, play, clean, paint, climb, surf, help, carry, push, swim, build, shoot, catch, etc. (For the record, grab, thrust, and pump were also suggested to me.) The simple fact is that we have to rise above the majority of mainstream society and be vigorous and vivacious T-men – not "physical cowards" as it was once phrased for me.

And yet we constantly hear fat folks blame their metabolism and/ or genetics.

You know what? When I teach, I show the class something I call "the Pie Chart of Hope." It summarizes the proportions of contributing factors to obesity. Among accepted contributors like socio-economic and genetic factors, it's still lifestyle ("non-transferable factors" like physical activity and diet) that contributes most.(1) This is also true of mortality/ longevity.(3)

Genetics certainly do influence body fatness but they account for 25-40% of the incidence of obesity, not 100%.(1) The rapid rise in obesity in the U.S. over the last 20 years can't be attributed solely to genetics (which don't change that much in a culture over so little time). These facts are good news for anyone willing to take personal responsibility for their body. Yet most Americans want to melt-off 30 pounds overnight while they sleep. (Again the absence of movement theme!) They're constantly blaming any conveniently un-modifiable factor for their sad state.

And yet we evolved to move. Any fit person can't stand to sit utterly motionless for very long, without purpose.

For over 99% of our time on this earth, humans were hunter-gatherers – nomads and wanderers. It was only relatively recently that we settled into our comfy, overweight, sedentary, agricultural social structure. Although learning to be lazy can actually be a good thing for ectomorphs desperately trying to gain weight, the opposite is true for any of us wondering why we can't lose that extra fat, despite our workouts and dietary practices. As we'll see, most of our kcal burning day is spent outside the gym.

Now let's go back to my trek through the airports of America. Let's see how many kcal could've been spent by those poor souls compared to what they chose to do...

10-min. Walk through airport with 10 lb. of baggage

Take the stairs with 10 lb. of baggage

*Slightly greater than a resting value but admittedly not zero; 80 kg person; durations and loads are reasonable estimates.

Based on these estimates, the sedentary folks I've been chastising who rode the motor scooter instead of walking, then rode the walkways at the airport and took the elevator instead of moving their own carcass and luggage, burned just 45 + 10 + 10 = 75 kcal during these "activities."

Had they walked to work, then carried their own bags as they walked through the airport and up its stairwells, they'd have burned 125 + 75 + 55 = 255 kcal. The socially indoctrinated wussies have missed out on at total of 255 – 75 kcal = 150 "free" calories burned without even considering a treadmill or exercise bike. And this rough estimate only examines a tiny portion of their waking day.

If you think this is a joke, I would've agreed with you 10 years ago. A logical first impulse is to poo-poo NEPA as insignificant compared to gut-busting workouts. Parking an extra few spaces from the grocery store or taking the stairs to get in some extra calorie expenditure is a concept strictly for old ladies, right? But ask yourself if you can keep up a gut-busting workout for more than an hour or two each day (not that you'd want to).

Then ask yourself what percentage of your time is spent doing various daily activities versus those brief gut-busting workouts at the gym. It's about 90:10 for most of us. The scenario is much like the "resting metabolic rate (RMR) versus exercise metabolic rate" conundrum. Although you certainly feel a much lower metabolism during times of rest, RMR still accounts for 65-70% of your total kcal output.

It's simply a temporal accumulation issue. You're outside of the gym 22 hours per day – perhaps 14 of them awake – and that's a long time. By reasonably exerting ourselves and being physical creatures all day long (as opposed to solely in the gym) we become ever-leaner and more "physical-looking." Form follows function. Non-strenuous physical activities add up to a leaner physique – especially for one that's endured enough rigorous dieting to slow itself down in a self-preservation attempt (depressed T3, etc.).

The beauty of this is that carrying one's own luggage, or walking to the gym or store, or taking the stairs, or using manual yard work equipment can be done at an intensity low enough not to interfere with muscle recovery. This is to say nothing of some "horizontal aerobics" with your girlfriend or wife. Heck, even chewing gum can add up to about 100 kcal "burned" throughout the day!

This whole low-moderate intensity NEPA concept is similar in principle to my personal choice of walking uphill on a treadmill each morning instead of doing wind sprints or long-duration weight workouts. Mild but ongoing activities burn calories without crossing endocrine and metabolic thresholds that sacrifice glycogen and even muscle mass as we strive for leanness.

Consider this: Back in San Diego, I used to eat 4500 kcal per day when bulking up but I never got over-fat. I actually prepared foods by the half-dozen: six servings of oats, six beef burritos, six servings of pasta – I was hell bent upon supplying a surplus of muscle building nutrients. At the same time I had no car and had to walk two miles each way to the gym and neighboring grocery store. I never considered the walking anything but a transportation necessity or perhaps a time to sip a travel mug of java and prepare for the weights.

It wasn't intense enough to even cross my mind as exercise, per se. But the fact remains that I oxidized hundreds of kcal per week in transit – and the nearly fat-specific fuel that propelled me thusly allowed me to grow rapidly without looking like a sumo wrestler. See? NEPA does matter.

And so ends another tirade about the sad state of Western society and how we might rise above it as T-men. There is a famous quote that says "Beware the forgiving and spoiling grandmother, for she will not make you go to school if you feel reluctant. Instead wish for the harsh instructor, for you will be strong and grateful in the end."

Think about this regarding your daily activities outside the gym; think about this the next time a valet approaches. He's going to offer weakness along with those open arms and polite smile.

Tell him "No thanks, I'll carry my own damn bags."

Some of the stuff you need to do to get a bigger bench press doesn't involve actual bench pressing. Check out the tips and get the training program here.
Bench Press, Powerlifting & Strength, Training
Rob King February 25 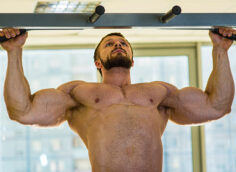 Pull-ups are easy. Just grab the bar and pull up, right? Not quite. Here are some common mistakes that just about everyone makes – even you.
Back, Exercise Coaching, Pull-Up
Al Kavadlo April 7

This popular exercise doesn't actually do much, unless you're a rank beginner. Here's why, plus a better exercise.
Tips, Training
Charles Staley December 13

More ways to keep your back strong, healthy, and ready for more plates. Check it out.
Back, Bodybuilding, Powerlifting & Strength, Training
Eric Cressey June 4