Everyone's experienced that magical patch of time where they can do no wrong in the weight room. Heavy weight goes up with ease. Muscle packs on by the pound. Plateaus are blasted through, and new records are set. It hits, it sticks, and then it's gone. But it leads to the greatest gains you've ever had.

Whether it lasts one workout or a few weeks, most muscleheads are only lucky enough to experience it a few times in their life.

We asked T Nation strength specialist Dave Tate how he achieved his greatest gains, and asked for the program that transformed him.

"The Idea Was Planted and I Just Couldn't Let It Go."

A few years ago, Tate was talking to Eric Serrano, his doctor and friend, about massive hypertrophy. "Serrano said something that caught my attention and put one and one together for me," says Tate. "According to some experiments he'd done with a select group of bodybuilders, he'd determined that maximum hypertrophy may take place when the muscle is under tension between thirty and forty-five seconds."

What may not seem like a big deal to most was an epiphany for Tate.

"Most guys who try to achieve that duration of tension will focus on the reps and how long each one should take," says Tate. "I took it differently and just decided to go for time."

So Tate made a four-week program with absolutely no repetition guidelines.

"Before this program my average sets usually lasted like 10 seconds," he says. "This was going to be hell and I knew it."

At the end of the four weeks, Tate had gained 10 pounds of muscle and looked harder and leaner than ever. His Extended Tension training program was officially born.

Tate's program consisted of four workouts per week, with one day of rest between each workout. He split his body as a typical bodybuilder might, and hit every muscle group twice per week.

Tate picked only two exercises per muscle group per day, and made sure they were movements he could do without a spotter. "I picked leg presses over squats, and dumbbell bench presses over any barbell work," he says. "You can't do barbell presses because you'll knock your fucking head off. You gotta be able to bail. A squat would be horrible, too. I'm not saying you couldn't do it, but you probably wouldn't be able to do the rest of the workout. It'd be that demanding."

"The movement really doesn't matter; it's the tension the muscles are under for that time."

Every movement was done for 30 seconds at first, and then increased by five seconds every week.

Use different exercises from Day 1.

Use different exercises from Day 3.

On each exercise, use a moderately heavy weight on the first two sets – about what you could lift for 12 to 15 reps. Use about 50% of that weight on the third set, and go for as many reps as you can get in the designated amount of time.

Tate suggests taking a week to figure out what weights you should be using. "I wanted a moderate tempo," he says. "Thirty reps isn't going to make you big. I wanted to fall somewhere between 12 and 15 reps, because that's where I grow the fastest. But remember, it's not about how many reps you do. Just go heavy and bang 'em out."

Tate would also position himself near a clock to keep track of the time. "You can't do it with a wristwatch," he says. "You never know when the damn thing will beep. If you're busting through the set, you have to see where you're at and readjust."

Tate also knew how to make the set harder.

"If the weight felt heavy and I knew there was no way I was going to make it for the full time, I'd start doing static holds, partial reps, or just flex harder at the top for a peak contraction," he says. "You've got to do anything to make the time."

Conversely, if he went too light, he'd lift the weight more slowly to tire himself out.

Each week, Tate added five seconds to the time under tension. So his progression looked like this:

More often than not, a serious lifter's gains can be attributed to changing something in his program, providing his body with a new stimulus. On the other hand, when a lifter gets stuck in a period of muscular stagnation, his first instinct is often to go back to a program that worked well in the past, rather than trying something new.

So it made sense to ask Tate if he'll ever do this program again.

"Hell no! It was hard as shit. I'll just move on to the next program that'll kick my ass."

Nail your abs, triceps and chest with this exercise combo you can do anywhere.
Tips, Training
Nick Tumminello February 21

Q & A with one of the world's premier strength coaches.
Question of Strength, Soft-Tissue Techniques, Training
Charles Poliquin May 22 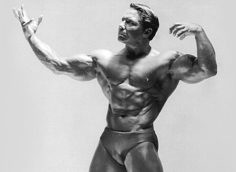 Bill Pearl is widely acknowledged as the first thinking man's bodybuilder. Here are three things you can learn from him about building muscle.
Bodybuilding, Training
Scott Abel May 29