Sometimes the only thing holding you back from achieving new
personal records in the squat is fear.

In fact, contrary to popular belief, when President Roosevelt
made his famous speech that included the line, "We have
nothing to fear but fear itself," he was actually talking
about squats. Never mind that he had polio, he didn't let a
little thing like that hold him back.

No sir, the man had pluck.

You history buffs can debate the veracity of that story all you
want, we don't care. What matters is how we overcome this
fear.

They're not really an exercise, but a method. We think
you'll forget the semantic inaccuracy once you try
them.

The method was allegedly developed by former Mr. America Chuck
Sipes, but it comes to us courtesy of Charles
Poliquin.

Sipes claimed the method simply built tendon strength and thus
allowed the lifter to squat greater loads. Poliquin, however,
believes it heightens the shutdown threshold of the Golgi Tendon
Organ (GTO), which is a tension/stretch receptor located in the
tendon.

According to Poliquin, "The GTO inhibitory effect can be
seen when two people of unequal strength arm wrestle. As the weaker
person loses, it looks like he's suddenly quitting and gets his
wrist slammed to the top of the table. What's really happening is
that the GTO perceives a rapid rate of stretch during the eccentric
contraction, at which point it yells to the brain, 'Shut down,
or this pimply-faced goon is going to rip the biceps apart!'
The brain then sends a rapid signal to inhibit the contraction in
order to prevent a muscle tear."

Apparently the same thing is true of your legs when you do
squats. However, you can raise the GTO threshold by interspersing
8-second heavy isometric holds, a.k.a. supports, in between regular
sets.

This his how you incorporate Heavy Supports:

Set 2: A heavy support of 8 seconds at 200 % of max. Basically,
it's 1/16th of a squat. You just unrack the weight and hold an
upright position with your knees just short of lock-out. The weight
should be heavy enough that your knees start to quiver like a
certain seasonal fat man's belly when he
laughs.

Poliquin maintains that the loads you use during heavy supports
go up dramatically (we've only just begun to experiment with
the method so we'll take his word for it).

While the percentages indicated are generally accurate, you
might want to use even greater loads then the ones suggested.
Don't be afraid.

Regardless of whether the method improves your squat poundages
through building tendon strength, inhibiting the GTO, or simply
eliminating fear, it works. 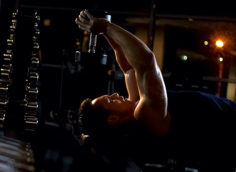 Bring back this muscle-building move. Here's a version that protects your joints while allowing you to go heavier.
Training
PJ Striet November 17

If you have hard-to-grow biceps, this specialty plan is made for you. Check it out.
Tips, Training
Christian Thibaudeau March 20