The reason you keep getting hurt is predominately your fault. Moreover, most lifters make the mistake of rehabbing a setback only to go right back to doing the thing that got them hurt in the first place.

Isn't that the definition of insanity?

When it comes to back issues, I've had my share. After all, they're probably the most common injury among lifters in general. Keep in mind, though, that I'm not talking about the stuff you get hospitalized for (herniated discs, fusions, and other things requiring surgery).

More "minor" problems like facet issues, major strains, and SI joint misalignments can still put a lifter in a temporary world of hurt and place him on the chiropractor's table for repeat visits. As you might guess, missed deadlift attempts are usually the culprits.

The good news? There's a solution to get back to deadlifting that's more comprehensive than simply "waiting until you feel good again." This step-by-step approach will bring you back safely, and probably stronger, than you were in the first place.

1 – Split Stance and Isometrics for the First Few Weeks

The benefit of switching to a split stance is that it can disperse the spinal loading during barbell exercises. For people with back problems, the rear-leg elevated split squat and reverse lunge (shown below) are go-tos for lower body training.

Doing them with a slightly forward-angled torso can be huge for hitting the glutes especially, making for a worthwhile early substitution to deadlifts. Most other glute exercises, unfortunately, will also target the lower back and possibly aggravate it.

Also, isometric training (like the isometric deadlift, shown below) can exploit a very important truth: Most injuries happen when the skeleton changes position under the presence of load. Eliminate movement and you can work as hard as you want.

Pull for time intervals of 10-15 seconds and customize the segment of the pull pattern you want to work on isometrically. In the video I'm pulling from the bottom position, but I could've easily adjusted the pins to upper shin or knee level, or even above the knee to work various segments of the force curve.

This is a great tactic to use even when healthy because you can focus on making each segment of the pull pattern stronger. And you're doing it in a safe way. Win-win.

After a couple of weeks of following step one, it's time to put the entire deadlift pattern into actual motion. But there's a catch: You won't be using a barbell.

There are many strength coaches who'll argue that using a trap bar should be the number one deadlifting method to service the masses. I completely agree, but I'm also going to be realistic here. The glamorization that the barbell deadlift has received over the decades isn't going anywhere, no matter how much we coaches implore lifters to embrace the trap bar.

Regardless of its benefits to posture, sparing of the low back, and advantageous overall pulling position, many meatheads will still choose to be hard headed and instead opt for the barbell deadlift because it's the more "classic" movement.

But hopefully you have the wisdom to realize that coming back from an injury means training smart. And the trap bar is your friend. Here's a few quick notes as to why:

Since the "cradle" surrounds you (rather than a straight bar blocking your versatility of movement), you have the opportunity to lean the shins farther forward and keep the chest up higher. That means a lower seat position, which in turn will engage more of your quads for your pull. All of this will help your spine remain happy since you won't need to bend as far over as you would with a typical barbell deadlift.

The high handles add 4-6 inches of clearance for your pull compared to a straight bar. For the trap bar purists, you can always just switch to the low-handle pull for more ROM after you get better.

The internally rotated grip used with traditional deadlifts is just okay, but things get worse when routinely practicing a mixed grip on a barbell. This is a non-issue with the trap bar.

Space for your feet

Your hands will always be outside your legs, and you can choose a squat-width stance, a narrow stance, toes-out stance, or toes-forward stance. That's huge.

Once you've spent a few weeks becoming one with the trap bar, it's time to plan your return to the barbell. Your next transition requires you to start pulling from a rack, blocks, or any other elevated surface.

It's the same principle you took advantage of with the trap bar: By slightly limiting the range, you reduce the risk of re-injury while still receiving all the benefits of deadlifting for the rest of your body.

To be clear, the elevated pulling surface can be anything from a knee-level bar, all the way down to a couple of inches of elevation. I'm talking anything that can reduce the amount of pulling space from the floor.

In the video I'm lifting with nothing but a couple of thin plates under the bar. The idea here, of course, would be to start high, and gradually work your way down toward the floor in subsequent workouts as your back continues to heal up.

4 – Medium Sumo Stance for the Win

By now you've progressed even further and are pulling from the floor. Now's the time to make sure you don't make the same mistakes you made the first time you got injured. Much of this comes down to pulling with the stance that best suits you.

If you got injured and threw out your back during a deadlift, there's a good possibility that your hips shot up first and your lower back took on all of the loading from the get-go, especially if it was a heavy pull.

The next time you barbell deadlift, give yourself more of a fighting chance by setting yourself up to have a lower seat position, especially if you're a taller lifter. (This can be the most invaluable piece of advice you come across in the whole article.)

Watch the two videos below and compare my conventional-stance setup to a medium sumo stance. Pay close attention to my chest position, torso angle, and seat position.

Clearly, my torso gets to stay taller in the medium sumo-style pull, allowing me to contribute more total leg drive in the process. That in itself can spare the lumbar spine some stress. And you may surprise yourself into adopting the sumo as your new go-to barbell deadlift style that could end up being stronger for you in the long run.

What About Wearing a Belt?

Many people have a misplaced stigma attached to belts. To them, it creates "artificial strength" and takes responsibility off the abs and obliques to help stabilize the spine. To others, it's a staple. They put a belt on as soon as they start their first warm-up set.

Here's my take: Use one when necessary. That sounds painfully simple, but think about it – wearing a belt can provide feedback, prompting you to brace the abs and obliques harder with the Valsalva maneuver. This can help the spine stay stabilized and protected.

If you're healthy, at least belt up during the heavier sets, when it matters. If you're coming back from an injury, wear it for most of your ramping sets and, of course, your heavier sets to keep the movement focused away from your lumbar discs.

If you take another look at the last two videos, you'll note that I'm letting the bar drop fairly quickly. This spares the back from some unneeded time under tension and removes the spot where form is most likely to break down or deteriorate – the lowering phase of the lift.

Hell, man, you were just injured. Instead of playing with fire, ditch the eccentric control – especially on your heavier sets – and instead focus on eccentric-based training in separate workouts that don't involve insane poundages.

Q & A with one of the world's premier strength coaches.
Bodybuilding, Powerlifting & Strength, Question of Strength, Training
Charles Poliquin July 10 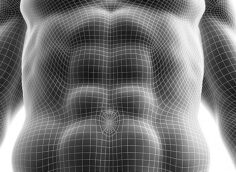 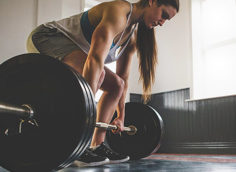 Use this setup cue to master the deadlift and protect your back.
Deadlift, Powerlifting & Strength, Tips, Training
Tony Gentilcore November 3