I don't recommend this because I think bodybuilders need to be able to overhead press a Hummer. I recommend it because in order to master Olympic weightlifting technique you must, in the process, develop galvanized kinetic chains and strength-muscle balance. These training effects do transfer, in part, to bodybuilders and represent a plethora of untapped mass building potential.

Think you don't need Olympic lifting? Try this, Brutus: Load a scrawny 50% of your body mass on an Olympic bar. Position your stance with feet hip-width apart and toes pointed out slightly. Grasp the bar with a clean grip and press it over your head. Lock the elbows out and pull the shoulders and arms back so they're in alignment with your ears. Now T-boy, squat to parallel without bending your elbows, displacing your arms, or riding up on your toes. Can't handle it? That's too bad. Maybe it's not too late to join Curves.

So what does that prove? It proves you lack minimum strength and flexibility requirements in the posterior chain, shoulder chain, and shank. That means any prime mover that fires off of those chains and relies on them for stability (biceps, triceps, pecs, delts, calves), will never reach their potential!

In the same way that creatine was originally passed over as a bodybuilding supplement because it was considered strictly an aid for power, Olympic lifting is the bodybuilder's "best kept secret" as it has even more potential as an indirect developmental tool.

The secret is out: supplemental periods of Olympic lifting can build a strong, great-looking body. There are many training effects that stand out as particularly helpful. Let me break it down.

Every trainee that lifts weights is looking for a training effect. That training effect may be increased muscular strength, increased mass, better endurance, etc. In order to gain that training effect, the structures involved must undergo unique changes that align the development of that specific skill. In the case of Olympic lifting, the following adaptations (previously thought of as exclusive only to Olympic weightlifters) will transfer to bodybuilding:

• Increase contractile force, i.e. shifts the tension-over-time curve up and to the left.

• Reveal and iron out weak links in the kinetic chains (aligns the body balance).

• Increase the frequency and intensity of micro-trauma (anabolic stimulus).

• Increase the range of motion to the posterior chain and shoulders.

Olympic lifting will also have the following neural, chemical, structural, and technical effects:

Neural – Increased neural drive to the muscle (the rapid display of force in order to overcome inertia, i.e. strength-speed.) It's kinda like the ability to go from 0 to 60 in a Porsche rather than a Yugo. Quicker fast-twitch firing speeds allow Olympic weightlifters to accelerate large masses. This means that both the minimum load and minimum speed thresholds required to excite fast twitch fibers are met more easily. This will ultimately expose more type II fibers to hypertrophy.

Chemical – The ability to store increased amounts of high energy substrates i.e. adenine tri-phosphate, creatine phosphate, etc. For example, this has an additive effect on top of loading creatine. It allows the trainee to store even greater amounts of these substrates. In the gym, this will allow the bodybuilder to squeeze out two extra reps.

Structural – The development of the contractile and non-contractile components. This includes an increase in the quantity and strength of connective tissue as well as increased stability and mobility of the various joint structures.

Using the example of a snatch, this movement causes the dynamic strength balance between the lower traps stabilizing the scapula and the deltoids mobilizing the shoulder joint. It's this musculo-skeletal rhythm that drives strengthening of the entire kinetic chain and ensures muscle balance between groups. This enables the bodybuilder to focus maximal contraction on the prime movers like the biceps instead of wasting that tension on the stabilizers of the scapula, i.e. the lower traps.

Technical – The development of dynamic flexibility and proprioception. It's a fact that Olympic lifters are the most supple of all strength athletes (as you probably realized if you tried the overhead squat example I gave above).

Who's this program for? If you're at a plateau with 8 to 15 reps training, H.I.T. training, or super-slow type training, this will work well. If your extensors are weaker than your flexors this will kick ass. And if you're post-rehab but still encounter low back, knee, or shoulder pain, this program is likely your answer.

The following is based on my experience in targeting untapped motor units and future mass potential in the posterior and scapular chains. It corrects basic alignment and flexibility flaws developed by all bodybuilders at some time or another. It also lays the groundwork for progressively technical Olympic lifts such as the clean and snatch. (See my Meltdown Training 2 article for additional applications and technical descriptions of Olympic exercises.)

Back and neck extensors

Snatch grip: A snatch grip is wider than other grips; it's the distance from elbow to elbow when the arms are straight out to the side.

Hook grip: A hook grip is a pronated grip where the thumb is tucked under the index and middle fingers on the same side of the bar. It provides additional power. I didn't include it as a requirement at this level, although it's good to get used to it.

Alternate day one and day two. Train twice per week for five weeks. For best results, additional flexibility work must accompany this routine.

This exercise is designed to strengthen the medial leg muscles along with teaching the proper initiation of the posterior chain into the more technical hang clean. The bar is grasped with a clean grip. Use a wider than hip width stance, elbows extended, knees slightly bent.

Start the eccentric (negative) movement with the bar against the body. The bar is lowered to just below the knees with the backwards push of the hips and buttocks. Note: This deadlift eccentric phase should take up to four seconds and the center of mass should be positioned on the heels in the bottom position.

Explosive shrug + calf raise: Like a bungee cord, the hips and loaded hamstrings contract concentrically as the lifter begins to stand erect explosively. When the bar touches mid-thigh the lifter shrugs dynamically and extends the ankles, knees and hips. 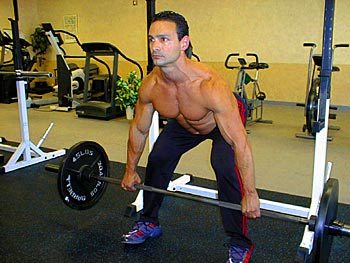 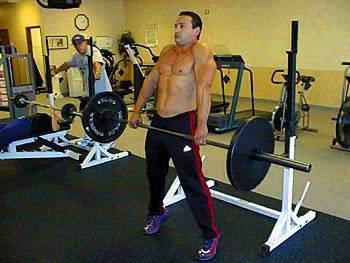 B1) Reverse one-legged squat on step

Start by holding a barbell with a clean grip. Keep elbows tucked directly under the bar at all times. Stand in front of a 12 to 18 inch step. Position the toes of the planted foot on the step. Dorsi flex the ankle of the free leg so that only the heel makes contact with the ground. Using the active contraction of the vastus medialis and quads, concentrically contract and elevate the free leg to bench level. After knee extension, follow through by extending the hips. 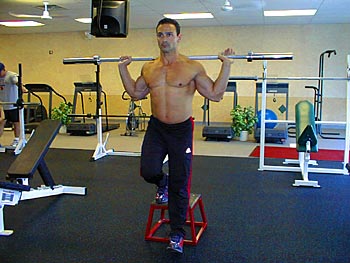 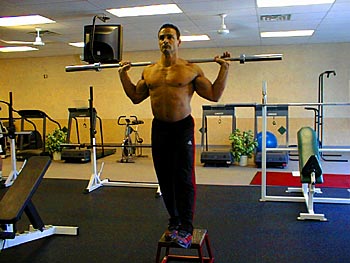 Position your stance with feet hip-width apart and toes pointed slightly out. Grasp the bar with a clean grip and press it over your head. Lock the elbows out and pull the shoulders and arms back so they're in alignment with your ears. Squat to parallel without bending your elbows, displacing your arms, or riding up on your toes. 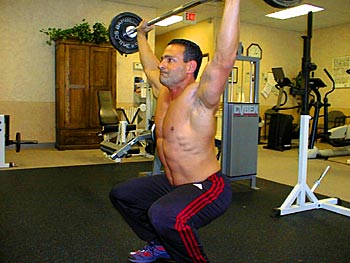 This strengthens the side bending muscles of the obliques and quadratus lumborum while also stretching the typically tight illiotibial band. Assume a side lying position with one arm elevated and placed on a flat bench. Feet are on the floor.

Flex the stabilized elbow into 90° adduction. The other free arm is placed overhead or on the pelvis. Extend the body so that the ankles, pelvis, shoulders and ears are aligned. To begin eccentrically, lower the pelvis into a fully stretched position. Concentrically, raise the pelvis through the midline in a coronal direction. Be careful not to rotate the pelvis or flex the hips. 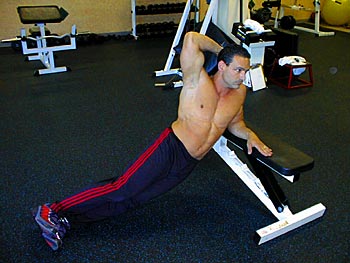 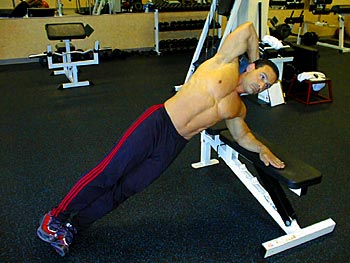 The front squat is similar to the back squat except with the bar in front of the body, above the clavicles, while actually resting on the deltoids. Elbows should be pointed up and palms should be facing the ceiling (reverse supinated grip). Feet may be slightly wider than shoulder width and toes out slightly.

Additionally, it's helpful in the case of trainees with tight calf muscles to elevate the heels with a one inch board. This increases squat depth. Many trainees also report painfully tight wrist flexors. Keep the load light and suck it up for three sessions as this will vanish.

For the push press part of the movement, use the same grip as described in the front squat. Position the bar in front of the neck resting on clavicles; lower the elbows so they're pointed down. Standing with the torso erect and chest expanded, bend the legs until the body is in jump position. Next, explosively dip and drive the bar upward going up on your toes. Let the heels come back down as you lock out the bar with your arms. 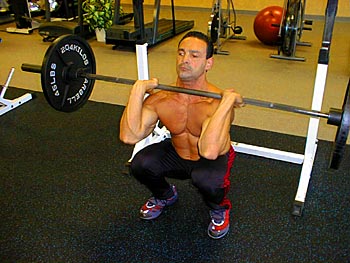 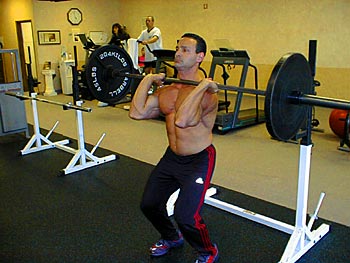 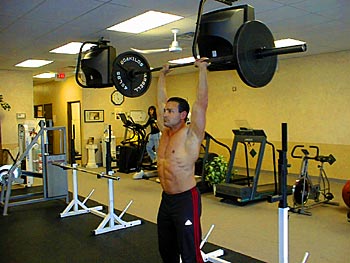 B1) Chin ups with a plus

This exercise adds scapular adduction and abduction. Grasp a chin up bar with a shoulder width grip with the palms facing you. Begin at the bottom, stretched position. First, forcibly pull together and separate the shoulder blades for one second each. Next perform the concentric portion of a traditional chin up, forcing the elbows down and back as the chin passes the bar. 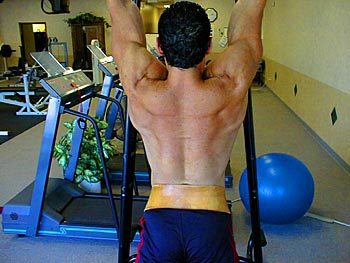 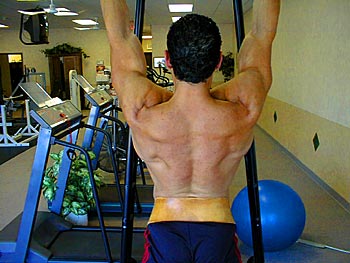 Begin by setting the safety bars just above head level. Stand with the torso erect, head level, and chest expanded. Grasp the bar using a clean grip. Press the bar overhead, locking the elbows out and pulling the arms to the posterior of the head (in alignment with the ears).

Using extended elbows, grasp a barbell with a snatch grip and place at mid-thigh level. Explosively shrug the shoulders concentrically. Once they're maximally contracted, use that momentum to bend the elbows and rotate the shoulders until the elbows are locked. The overhead "catch" position once again extends the shoulders and pulls the arms to the posterior of the head (in alignment with the ears). Note: Keep the bar traveling as close to the body as possible. 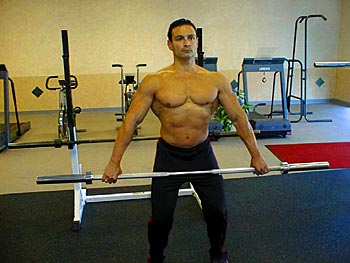 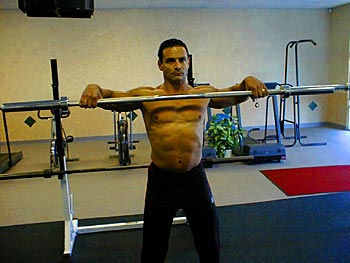 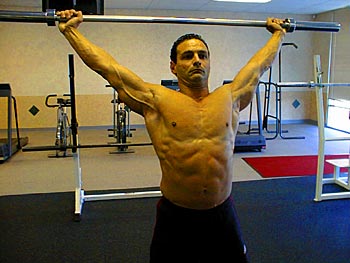 Lie on the floor, knees flexed and feet flat in typical sit up position. Don't anchor the feet. Cross the arms over the shoulders and grasp the deltoids. Begin by firing the transverses abdominis towards the spine and then flexing the trunk until the elbows touch the patella. The rep doesn't count if the feet don't remain flat or the hands come off the shoulders at any time. 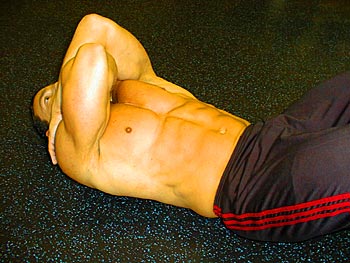 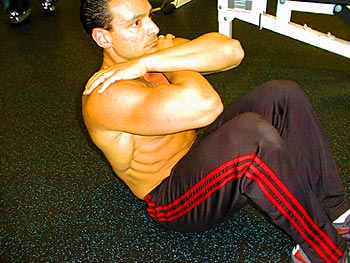 There you have it: an Olympic lifting program to help the bodybuilder break out of a training rut! Keep in mind there is a learning curve here. It takes time to learn the patterns, so be patient, this isn't a "get big instantly" program. Start stretching and keep learning and progressing so you make continual progress and don't develop bad habits.

Note: My specialty isn't training future clean and jerk or snatch champions. I'm only a student of competitive Olympic lifting.

Most people never maximize their genetic gifts when it comes to building muscle and strength. These six methods will change that.
Bodybuilding, Motivation, Powerlifting & Strength, Training
Christian Thibaudeau November 7