I’ve carried boulders under water, walked a mile with a barbell pressed over my head, and thrown more sand bags than Katrina relief volunteers. I’ve learned how to improvise in some of the most inhospitable – and inconvenient – places on earth. I’ve also gotten in the best shape of my life by using the methods I’m about to describe.

“Hey, can I ask you a favor? Can I keep the kettlebell in my tent? I want to put it over the hole that the rat comes through.” 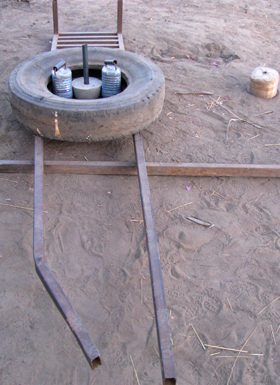 Earlier this year I found myself on a plane traveling to Africa to work on a two-month project. I lived in a tent in a small camp with a few other men, isolated from just about anything one could call a modern convenience.

I was flown in on short notice to replace someone else and the project was up and running when I arrived. A highly creative former Recon Marine had already built an impressive caveman gym under a tree next to our tents. He also had a set of gymnast rings, so the only extra workout equipment I brought out was two EFS bands (red and orange), a parachute riggers belt for weighted pull-ups, and a 16-kilo kettlebell that I managed to cram into my checked luggage.

There was plenty of time to work out, and in some cases it was actually structured into our workday, so I set about devising a program using the resources I had available.

There were several considerations:

The heaviest thing we had was the barbell with chains on it, which weighed maybe 130-140 pounds.

There was what may have been a truck trailer frame propped up on a rail and weighted down with a few tires and broken concrete kettlebells. We could add several hundred pounds of extra weight to it by piling it with bundles of straw and use it for deadlifts, but the African guys we were working with had the habit of taking the straw back to build their huts, so that wasn’t reliable.

This meant that maximal strength wasn’t going to be a priority. Regardless of what I came up with, I wasn’t going to be going home and set any deadlift records. I was free to focus on conditioning and bodyweight movements, de-load my spine, use a little more volume than usual, and put some time into unilateral work. I decided that I’d like to finally be capable of doing a 90/90 split squat without cursing the day Mike Robertson was born, so I made sure to include those. 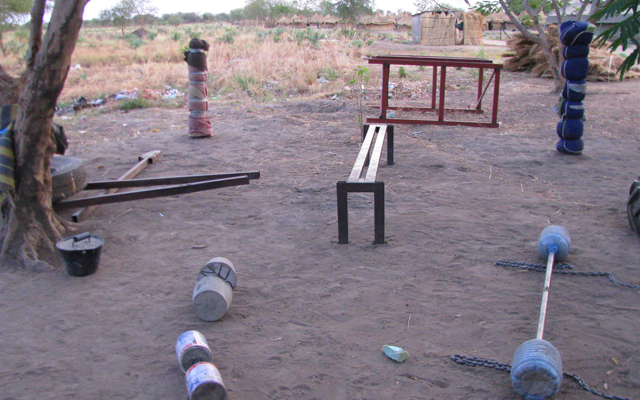 The bar under the deadlift rack has a bunch of iron attached to the end with hose clamps. We propped the end in the tree and used it for landmine core exercises.

The weights on the barbell were fixed rather than the free-spinning kind on normal barbells, which meant that it wouldn’t work well for Olympic lifts, either.

We didn’t have much for a bench and I wanted to spend as little time rolling in the dirt as possible. Most parts of Africa bring the potential for an array of exotic and horrifying parasites and I’d seen the pictures of friends of mine on a similar trip who had to be medevac’ed to Germany with worms burrowing through their lower legs after playing volleyball barefoot in the sand.

So Turkish get ups and floor presses were out. 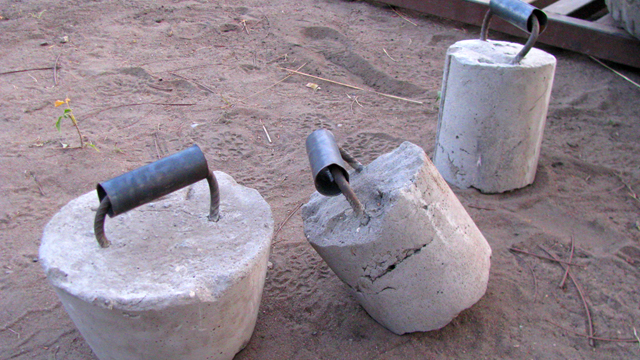 Other than the Recon guy using it for rodent control, the kettlebell I flew out wasn’t used too often because the caveman versions were heavier. We mostly used it for warm-ups and “I’m bored” recovery workouts.

It was brutally hot. The temperature was typically in excess of 120 degrees during the day, so it was best to keep workouts to the early morning and late evening and keep any other physical activity to short durations during the midday. This meant splitting things up quite a bit.

There was a metal frame wide enough to hold the barbell and serve as a sort of rack, but only if you stood inside it. It wouldn’t work for squatting but it could be used for overhead pressing.

A big advantage was that we had plenty of time and the “gym” was right next to our tents and the kitchen, which were really the only other places we hung out at if we weren’t working. So high frequency stuff was a good fit.

After some trial and error, I ended up with a program using two workouts a day, both fairly short, with the morning one taking place just before sunrise and consisting of stretching, mobility work, and extra ab work plus a form of running or sprints on three days of the week. On the non-running days it served as active recovery.

I did strength work five days per week, with Wednesday being a simple tire drag from a belt with no accessory work.

I also settled on 100 pull-ups per day. These were spread out over the course of the day, with reps before and after each meal to facilitate GLUT4 translocation and thus nutrient partitioning to muscle cells.

I worked through a progression, and every other day split the 100 reps into 50 pull-ups and 50 single-arm rows to put some stronger emphasis on scapular retraction. This was a quick way to get in a lot of quality volume without spending much time outside when the temperature entered the triple digits.

I’d done similar things years ago with either push-ups or pull-ups in the early preparatory phases of special operations selection in the military and had always had good results with it. It turned out to be my favorite part of the program. By the time I left I could knock out twenty-rep sets of pull-ups like a robot.

Nutrition-wise, we had somewhat sparse amounts of what was typically very good locally-produced food. Low calories overall, but all meat and veggies plus rice and potatoes as options for post workouts carbs. And we only had one incident of typhoid, so we had that going for us. This is where I took up the practice of intermittent fasting, which in this case was just fancy-talk for living in a place that sometimes didn’t have food.

30-minute mobility circuit and stretching with ab drills like plank, side plank, and salute plank. Salute planks are an anti-rotational variation of planks. From the normal plank position, pick up one arm in roughly the same way you would if you were saluting someone. Brace to prevent spinal or pelvic rotation, hold for time and switch.

Every other day, do 50 reps of pull-ups and 50 reps of single-arm rows. Lower rep sets like 5-8 are done in multiple sets. Spread the work out over the entire day and do at least 10 reps before and after each meal.

* perform ‘A’ circuit every minute for thirty
minutes. Every rep should be fast and explosive and you’ll have to move quickly
between stations. If you exceed the time just wait until the next minute to start again.

Several months later I was in Costa Rica for a surfing vacation in a small town on the Nicoya Peninsula.

There was no gym and I was traveling with a small three-day pack, which meant that the only equipment I had with me was the usual pair of EFS bands.

Surfing in itself is a great upper body workout. It’s probably the best sport there is for developing good thoracic extension and provides a ton of upper back and shoulder stimulus.

It’s not a strength activity though, and doesn’t do anything for the lower body so I had to come up with a series of lower body workouts and some supplemental upper body work.

What I had was two bands, my own bodyweight, a beach, a log, and a tree.

I loosely followed a five-day per week program and stuck with the same three running protocols I’d used earlier in the year in Africa and alternated them with lower body strength sessions using the log.

I did the upper body sessions on any day that I didn’t surf as a second daily workout. 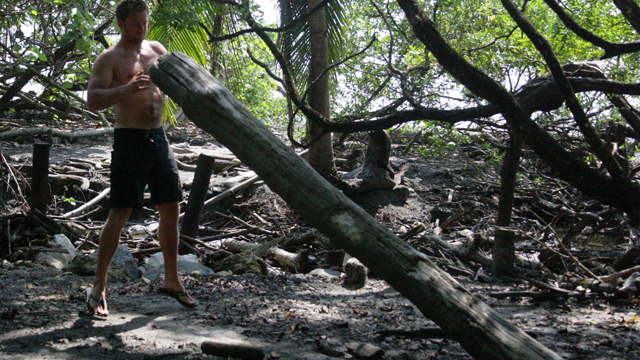 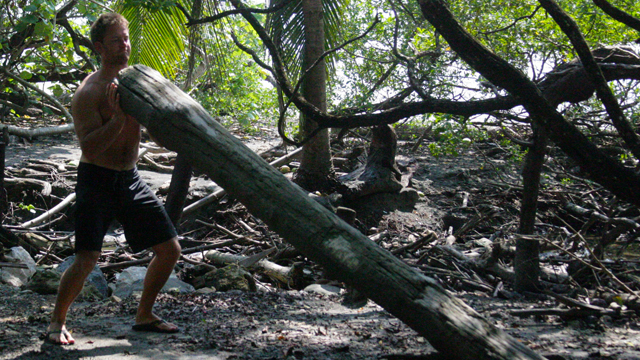 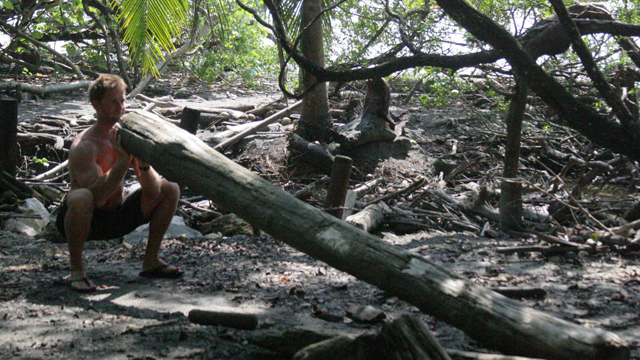 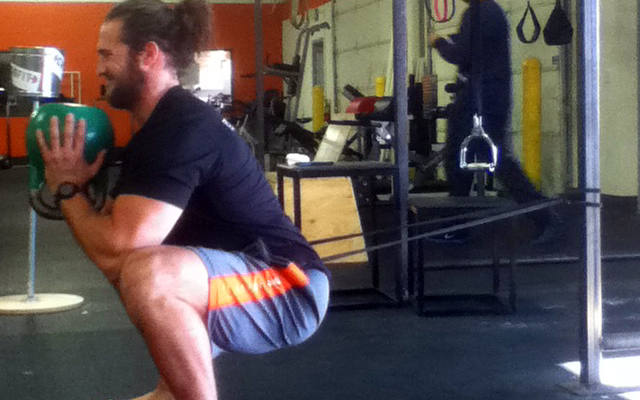 The handy thing about squats done this way is that the resistance has the instability of a free weight but moves in an arc through the range of motion, which pushes the weight back further as you descend into the squat.

This means that you’ll naturally squat back into a hip dominant squat, emphasizing the posterior chain. The goblet hold also keeps your spine more upright than a conventional back squat, which allows for less shearing stress and a challenge to the abdominals comparable to a front squat. 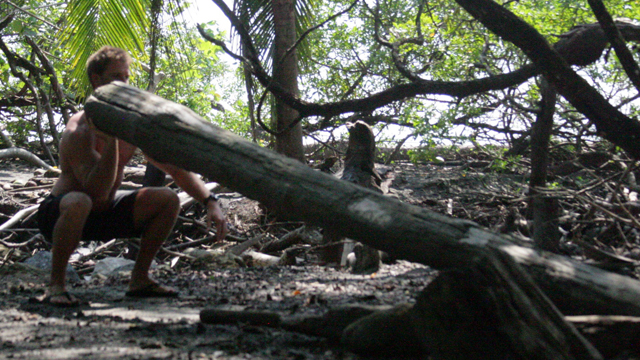 The toughest thing to improvise when you’re limited to bodyweight movements is usually horizontal pulling. A simple band takes up minimal space in a pack and allows for a variety of scapular retraction and external rotation movements, in addition to providing extra resistance on things like squats, pull-ups, and pushups.

A set of gymnast rings is the next in line in usefulness; takes up a little more space but opens up a huge number of options. If you’ve got rings and a band the most difficult thing will be finding ways to weight lower body movements. From there, you can put together a workout that’s more effective than what most people are doing in actual gyms.

Don’t think in terms of finding things that resemble gym equipment and adapting your workouts to that. Start with the movement and then find a tool to facilitate it.

From there, think of the energy systems and capacities you want to work on and determine which ones are most suited to your environment.

If you look around, you’ll generally find that you can either find or make whatever it is you need for a full body workout. That’s going to make the difference between coming home in good shape or returning from a trip smaller, weaker, and fatter than when you left because you “couldn’t work out.”