Squats are one of my absolute favorite exercises. Unfortunately, as much as I love squats, my knees and back don't. If I'm not careful they can really do a number on me. I could nix squats altogether in favor of more single-leg work, but squats are too valuable to ditch entirely, plus I just enjoy doing them.

If you have a similar love-hate relationship with squats, here are some ways to make the lift more user-friendly.

Moreover, front squats are a lot easier on the body. You're forced to keep a more upright posture and there's a built-in safety mechanism that prohibits you from breaking form too much – you'll dump the bar before it's able to get too ugly. You're also using less weight, and any time you can get a comparable training effect with lighter loads, you're doing your body a favor in the long run.

Lastly, front squats do a better job of targeting the quads, which is why most people squat to begin with. Unless you have a good "squatters build" (i.e., short and stocky), back squats generally end up looking like a good morning and in turn target the posterior chain to a greater degree.

The biggest knock with front squats is that it can be difficult at first to hold the bar, especially if you don't have the flexibility to use a clean grip. If that's the case, try using straps or the cross-arm grip and you should be all set.

2 – Shoot for About Parallel 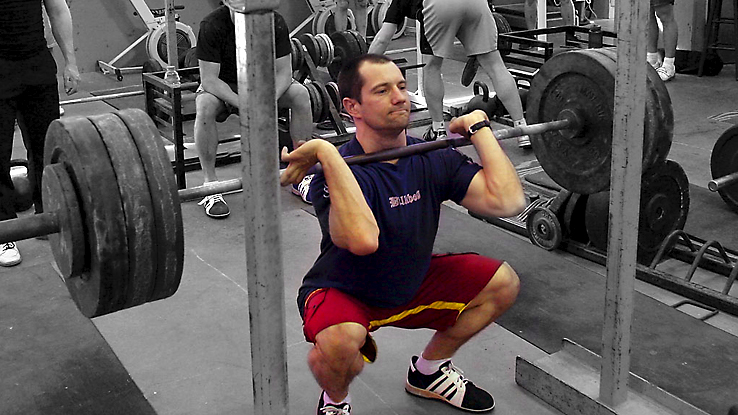 Aim to squat to parallel or maybe slightly below. For most lifters this means you need to squat deeper because most people squat abysmally high. Quarter squats are just an ego exercise; they allow you to handle more weight than you deserve to be lifting. Any time you mix ego and heavy-ass weights, bad things happen.

Some bodybuilders argue that quarter squats are better for targeting the quads, but usually that's their way of trying to justify squatting high because they don't have the mobility to squat deep. There's research supporting the idea that full squats are better than partial squats for leg development, and if you need empiric evidence, just watch footage of guys sporting the hugest quads on the planet squat – Ronnie Coleman, Tom Platz, Olympic lifters, etc. They all get down there.

That said, there's such a thing as "too low," especially for those with lower back and knee issues. It's cool on the internet to preach rock bottom or ass-to-grass squats, but going to that extreme range can be problematic for those with prior knee issues. The last few inches from parallel to rock bottom is where the pelvis tucks under for most lifters, putting the lower back at risk.

I used to squat rock bottom, so I'm not just some guy bashing something I can't do. I've recently switched to at or just below parallel for my heavy work and my joints feel much better for it.

You're also not giving up much from a muscle-building and performance standpoint by going to just under parallel as opposed to rock bottom. Of course, this is largely a moot point since most people fall in the high squatting camp, but it's worth mentioning for the few "ass to ankles" squatters out there.

When people talk about squats and knee pain, it's usually the knees coming over the toes. I'm not too concerned with the knees coming over the toes – provided it's not excessive – but I'm a lot more concerned with dive-bombing the eccentric and bouncing out of the bottom. One study showed that bouncing increases shear force on the knee by 33%, which jibes with my experience.

For folks with knee issues, I highly recommend controlling the eccentric portion of the squat rather than dive bombing to prevent bouncing. You don't necessarily have to pause in the bottom position, but I suggest it. This will also ensure that you're relying on the muscles to lift the weight rather than using momentum.

Some people advocate a really wide stance squat where you break at the hips and push your butt back while trying to keep the shins as vertical as possible. This will indeed take stress off the knees, but it'll also puts more stress on the lower back, and it also makes for a shitty quad stimulus.

Others advocate a really close stance squat with an upright torso to smoke the quads and take stress off the lower back, but this forces you into a knee-break squat where the knees shoot forward excessively. I'm not worried if the knees come out over the toes to some extent, but a pure knee break squat is a bad idea for long-term knee health.

Instead, I recommend taking a moderate stance just outside shoulder-width and breaking from both the hips and knees at the same time. This will allow for a good torso position and still smoke the quads without putting quite so much stress on the knees. Personally, just moving my stance out a few inches has made a world of difference for my knees. 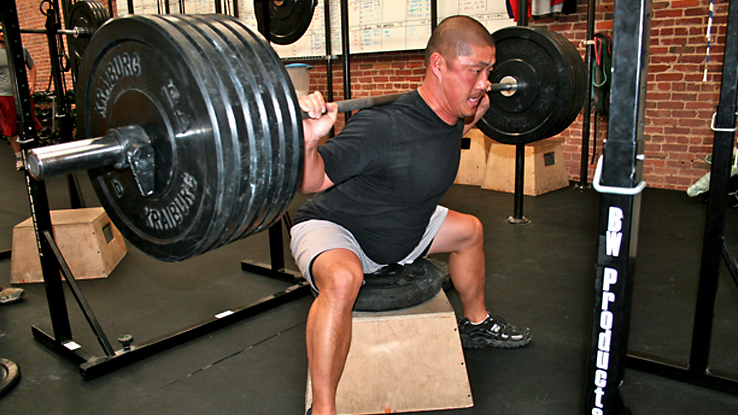 The primary reason for squatting to a box or the pins in a safety rack is to serve as a depth gauge. For high squatters, it forces you to go all the way down. For ass-to-grass squatters, it stops you from going too low. Squatting to a box or pins also encourages you to control the eccentric so you aren't bouncing your ass off the box or bouncing the bar off the pins.

Whether you use a box or pins is largely a matter of personal preference and what you have available. Both work well, but remember that if you're using a box, you're just using it as a depth gauge, not rocking back onto the box like you would for a powerlifting-type box squat.

Chains are typically thought of as a powerlifting tool to help overload the lockout, but they're also a great way to take some stress off the lower back and knees in the bottom position while still allowing you to move big weights.

Those with joint issues will do best spending the majority of their training time in the 6-12 rep range. Going much below that is flirting with danger, and doing super high reps can often lead to some gnarly form breakdown.

The good news is that 6-12 range is great for hypertrophy, so it's not like you're resigning yourself to a lifetime of being a skinny little bitch. Getting strong in moderate rep ranges is the best way to get jacked.

8 – Squat at the End of the Workout

Squatting at the end of the workout ensures you're sufficiently warmed up, and it also means you'll have to lighten the load, which takes stress off the joints and makes it easier to maintain good form.

Putting it altogether, my favorite user-friendly squat variation is the chain front squat to a box.

As a reference point, I'm using a 12-inch box, which puts me right around parallel. Taller lifters may be able to get away with using a slightly higher box, but don't get carried away and start rationalizing that your 18-inch box puts you at parallel, because unless your name is Shaq or Dwight Howard, it probably doesn't.

If you're gym doesn't have low enough boxes, you can also do chain front squats to the pins, like so:

The key here is to control the eccentric to avoid bouncing the bar off the pins, so think about resting it on the pins as quietly as possible.

Of course, if you don't have chains, you can also just use straight weight. In that case I like to bump the rep range up a bit because I find my knees tolerate it better.

Now contrast that to how I used to squat with a closer stance while going all the way down. I no longer advocate that most squat this deep, especially if you have knee issues. If you turn the volume up on your computer and listen closely, you can actually hear my knees cracking!

I'm no doctor, but common sense tells me that can't be good long term, even if it doesn't cause pain in the short term.

You don't necessarily have to apply all the tips here. For example, if you prefer back squats to front squats, that's fine. Same goes if you prefer free squats to squatting to a box or pins. Putting some of these tips into practice though will definitely help your squatting in the long run.

Because nothing improves your physique more than building your shoulders. Here’s how to do it.
Bodybuilding, Shoulders, Training
Christian Thibaudeau July 11