The hip thrust may be the best glutes-builder on the planet. If you want to sprint faster, explode harder, rip more plates off the floor, and sport rock-hard gultes, the hip thrust should be part of your program.

But when Bret Contreras first introduced the hip thrust, a few thoughts ran through my mind:

So I scorned the exercise for a few years and judged it as stupid – without ever trying it. That was a mistake.

I eventually broke down and decided to do it. After using it quite extensively for the last couple of years, I feel qualified to give my opinion.

Here are my thoughts:

Looking at my thoughts about the exercise, my qualms really don't have to do with the exercise itself so much as the setup and logistics. With that in mind, to reap the benefits of hip thrusts without the annoying setup process, try Rack Hip Thrusts.

Normally you'll see people prop a bench against the outside of the power rack (so it won't slide backwards) with the barbell on the floor directly in front of the bench. Instead, try putting the bench on the inside of the power rack with the safety pins set about a foot or so off the ground, such that the plates hover just a few inches off the floor.

Those extra few inches are small enough that it still allows for a full range of motion when you do the exercise, but it really makes a world of difference in terms of ease of getting in and out of position. It also makes it exponentially less annoying to load and unload the plates.

And while women don't tend to have problems sliding the bar up their legs, this setup works well for those who aren't ready to hip thrust 135 pounds yet because it allows you to elevate the bar to a comfortable starting height even with small diameter plates.

For that reason, this has quickly become a huge hit with my female clients, and a lot of them are continuing to employ it even once they reach 135.

The pins also help serve as a depth gauge to ensure you come down far enough on each rep – similar to how you might use a box as a depth gauge for squats – and encourage you to control the eccentric portion of the rep to avoid slamming the bar off the pins.

The rack method also works well for single-leg hip thrusts, which are my personal favorite because I feel it more in my glutes and the lighter loads are more comfortable on my hips.

The biggest problem most people have with single-leg barbell hip thrusts is just keeping the bar steady on their hips, especially in the bottom position. Doing them from the pins allows you to reset between reps, eliminating that problem.

Pausing each rep at the top helps a lot, too. I recommend this for bilateral hip thrusts as well because it forces you to pick a weight you can control and helps ensure that you use the glutes to lift the bar rather than skimping on the range of motion and/or substituting lumbar extension and anterior pelvic tilt for hip extension.

A quick word on getting the hang of single-leg barbell hip thrusts. Start with a very narrow stance so when you pick one leg up, the foot on the ground is more centered. That should help immensely.

This simple setup tweak will save you time and make your overall thrusting experience more positive. I just wish I'd started doing it sooner!

A training method that builds muscle five different ways and increases mobility. The only catch? It really hurts. Check it out.
Bodybuilding, Mobility, Training
Christian Thibaudeau November 9
In four months I'll be a whopping 28 years old. I know a thing or two about training and all that goes into it, but I also respect the fact that there's a hell of a lot I don't know enough about, and other topics I need to know something about that I'm not even aware of!
Training
Mike Robertson May 24 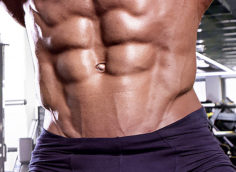 You have been warned. Still, this is a great move for abs. Take a look.
Training
Lee Boyce March 18

Are you 30 years old but feel like you've got the spine of a 90-year-old well digger? Michael and Cassandra can cure what ails ya'. Practice their deloading drills regularly and your spine will soon be as straight and springy as a young poodle dog's tail.
It Hurts Fix It, Training
Michael Stare & Cassandra Forsythe, PhD February 7