The last time we talked, I bombarded you with all kinds of
information on the nervous system. Now it's time to translate that
into your love-hate relationship with the bar.

Sure, more motor units equal more force production. Or does it?

The majority of research supports that all motor units
are recruited by 60% maximal voluntary contraction (MVC) in small
muscles (13-15) and by 85% MVC in larger muscles.(3, 13, 16, 17) Of
course, there's always an exception. There's some evidence that
additional motor units are recruited above 90% in the biceps
brachii (G. Kamen, personal communication, 2008), but again, this
is by far the exception.

Interested in how this relates to maximal force production? In
trained lifters, the majority of maximal strength gains will come
from work at intensities above 85%. This means that all the motor
units in both the small and large muscles contributing to that
movement will be recruited. 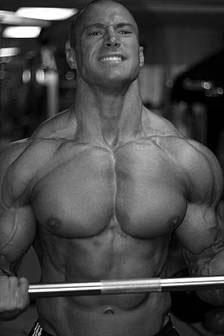 In other words, improved recruitment won't lead to
further gains in maximal strength because there's nothing left to
recruit! The main way the nervous system produces more force at
these levels is by increasing the firing rates of all the recruited
motor units, especially the high-threshold motor units that were
most recently recruited.

Alright, maybe this section shouldn't have been called
"Recruitment Doesn't Matter." I'll admit it, recruitment does
play a role. If you're training to increase maximal force
production, you need to train at an intensity over 85% in order to
maximize recruitment.

I'm sure some of you don't agree with that, so go ahead and
shout, "I've gotten stronger using lighter loads!" Remember
that in lifters with a young training age, everything works.
Circuit training, bodyweight training, and 5 x 5 programs all lead
to significant strength gains. Set, rep, and intensity combinations
aren't nearly as important for someone who's been training for
a few years as they are for someone who's been training for
over five years.

Speed of movement is one of the most important factors related
to strength gains. Actually, intended speed of movement is
the real key. What's the difference? We've established that maximal
strength training should be done above 85%, while including sets
over 90% for best results. Those of you who have moved a weight
above 90% understand that no matter what your intentions are, the
bar isn't going to move quickly. The actual bar speed
doesn't matter – the intended bar speed does. 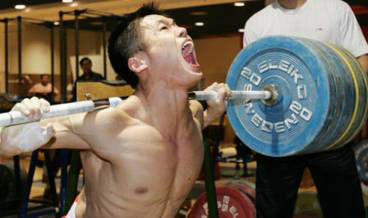 The bar might not be going anywhere fast, but
that's okay.

Not only does maximizing the intended concentric (positive)
phase of the lift maximize intramuscular tension, it also leads to
unique neural adaptations. Specifically, maximizing intended
contraction speeds leads to an increased rate of force development,
increased doublet firing, and decreased motor unit recruitment
threshold.(10) This is true of dynamic and isometric
contractions.(10, 18-20)

The fact that these adaptations occur with isometric
contractions is further evidence that the actual bar speed isn't as
important as the intended bar speed, as there's no change in
total muscle length in isometric contractions.

Decreasing the recruitment threshold may have positive
implications on force production due to a maximal firing rate
ceiling effect. If a high-threshold unit is recruited late in the
contraction, it only has a small amount of time to increase its
firing rate and therefore increase force production. If the
high-threshold unit is recruited sooner in the contraction, as it
would be with an intended high velocity contraction, it has more
time to increase its firing rate and increase the amount of force
produced.

Enough Science, How Do I Get Strong?

While I'm fascinated by the neural adaptations to exercise, I
realize that some of you may not be. So let's get to the fun stuff.
How can we use what we know to manipulate the nervous system to
make us as strong as possible?

There are three things I've found most people don't do that
result in quick increases in maximal strength.

Control the bar through the eccentric (negative) phase and
explode through the concentric (positive) phase. If you're
benching, this means lowering the bar down to your chest under
control and pressing it as quickly as possible. Take this concept
and apply it to all of your lifts.

You may find you can't do as many reps this way as you can if
you moved at a more comfortable pace. That's okay. We're after
maximal strength increases, not endurance adaptations.

Perform Singles and Doubles Over 90%

If you want to get strong, you need to lift heavy things. This
seems like an obvious concept, but many lifters don't do enough of
this. 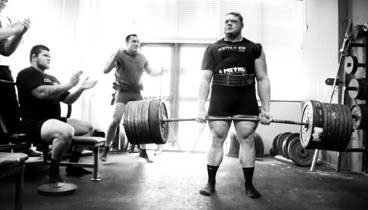 This won't hold true for everyone, but most people can do around
three reps at 90% intensity. By doing six to eight sets of one or
two reps at or above 90%, you can focus on the quality of the
movement without reaching technical failure. Teach your nervous
system to expect repetitive near max efforts and you'll experience
quick jumps in strength.

Warming up is receiving more attention than it used to, for good
reason. A high quality warm-up will positively influence the rest
of the workout. If you haven't purchased Inside-Out by Mike
Robertson and Bill Hartman and Magnificent Mobility by Eric Cressey
and Mike Robertson, you're doing yourself a disservice.

Following your dynamic mobility and activation work, it's still
necessary to warm-up on a specific lift. If you're going to be
working at submaximal intensities (which I'll loosely define as
below 90%), extend your lift-specific warm-up to a higher intensity
than what you'll be using for your work sets.

So, say you're doing a lower body workout that starts with
deadlifts for a 4 x 5 set/rep scheme at around 80%. Your max
deadlift is 400 pounds, with 80% of that equalling 320
pounds.

Moving over to the platform, your deadlift-specific warm-up
would look like this:

This overshoot in intensity increases the descending drive to
the working muscles. Neural mechanisms aside, just give it a try.
I've found that my perceived effort at any given intensity is
significantly lower when I follow an overshooting warm-up, as
opposed to when I don't (for example, stopping the warm-up at the
275 x 1).

As an added benefit, you're reinforcing near max efforts on a
sub-max intensity day. The more you tell your body it needs to
produce high amounts of force, the more it'll adapt to do
so.

Time to Set Some Records

After delving into the nervous system and making it out alive
with some techniques to apply, I bet you're itchin' to hit the gym.
Go hoist some iron and demolish those old personal
bests.

4. Henneman, E. (1985). The size-principle: a deterministic
output emerges from a set of probabilistic connections. The
Journal of Experimental Biology, 115, 105-112.

Most conditioning programs for MMA involve equipment that just isn't that practical. Not so with this! Here’s a realistic way to whip yourself into shape.
Athletic Performance, Metcon, Training
Chad Waterbury February 20

Looks weird, but it's one of the best exercises for big strong triceps. Here's how to do it.
Bench Press, Tips, Training
Paul Carter May 16
We don't throw around the term "living legend" much around here because not many people deserve such accolades. But T-Nation recently sat down with a man who just might fit the bill: Dave Draper.
Training
T Nation September 14

Is your neck so skinny it makes your head look like a candy apple? Here’s your solution.
Powerlifting & Strength, Training
Nick Tumminello June 10