But all you have to do is use a bit of Sherlock Holmesian deduction the next time you go in the gym. You'll likely observe that many of the guys who lift purely for speed, strength, and explosivity don't look as muscular as many of the bodybuilders, who, at least some of the time, play around with their lifting speeds.

It's undeniable – despite the success of the annoying guys who grow regardless of what they do – that lifting speed alters important factors affecting hypertrophy and strength development; things like time under tension, muscle activation, and metabolic and hormonal responses.

How much does speed alter strength and hypertrophy? Scientists in Sao Paulo, Brazil, say "slow speed" reps can help you build muscle up to 3 times faster than "fast speed" lifting. However, in a surprising twist of accepted lifting principles, they also found that slow speed lifts can progress strength up to five times faster than fast-speed reps.

How They Proved It

The scientists rounded up 12 experienced male lifters and got them to do Scott curls twice a week for 12 weeks. Half of the men performed "slow speed" reps where they lifted the weight in one second, but lowered it over the course of three seconds.

The workouts consisted of the standard 3 sets of 8 reps (of which the 8th rep constituted failure). As far as testing methods, they employed ultrasound examination of cross-sectional area of the brachialis biceps muscle, along with before and after 1-rep curl maxes of each of the test subjects.

Does That Mean You Should Always Go Slow?

The results, while hugely impressive, don't necessarily mean you should automatically turn into Eddy Eccentric and measure your sets in geological time. Instead, the lesson should be that it's a great idea to periodically employ slow tempo lifting into your workouts for periods perhaps as long as 12 weeks, after which you can go back to faster tempos for a while.

You need to know right away that our athletes at the US Air Force Academy don't train as if they're preparing for a strongman competition. The concept of training specificity makes it clear there are few similarities between competing in a strongman competition and competing as a football, basketball, or hockey athlete.
Training
Allen Hedrick November 10 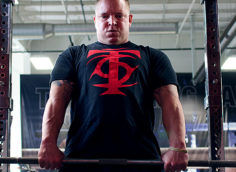 Controversial lifting advice from a bodybuilding coach who ditched drugs and got a new perspective on what works and what doesn't.
Training
Scott Abel August 26