How much you'll benefit from any leg machine will be determined by how fitting the machine is for your body. Here are some ways to modify your leg workouts to get more out of them.

Leg press machines come in all shapes and sizes, requiring you to adopt different body positions and foot placements. No two feel the same, which is half the reason why you end up screwing around with your foot placement for 10 minutes before the start of every set.

The best foot placement for quad development is the one that'll allow your knees to travel through the greatest active range of motion. This tends to be lower down on the foot plate instead of a higher and wider stance that emphasizes more glutes and hamstrings.

The problem with having your feet low on the plate? It often limits how deep you can go – some machines will allow you to go deeper than others, but you'll always be limited by your anatomy.

So try the Petersen variation. It allows your knees to travel through their greatest active range of motion.

Having your heels up permanently allows your knees to continue traveling over your toes, beyond when your hips "run out" of space. The Petersen leg press allows you to place load and tension through your quadriceps, no matter the style of machine you're using.

Charles Poliquin was a big fan of these. Just check your ego at the door because you won't need a lot of weight!

If your gym has one of these, and your goal is to build bigger quads, don't skip it. A well-done pendulum squat puts you in a great position to load your knee extensors through a large range of motion and with very little stress through your back.

But even with a well-designed machine, there's a significant unloading of weight in the top third of the movement. That means you're limited by how much weight you can use, which will be determined by how strong you are in the bottom two-thirds.

That's a third of the movement you'll miss out on, and the range of motion where your quads have the capacity to be pushed harder.

Do the pendulum squat using bands. Pick a moderate resistance band (or two) and attach it to your pendulum squat. It'll take some trial and error, but you need to pick a band that'll help "even out" the load. That is, the bottom of the movement is just as much of a challenge as the top.

The band will accommodate for your greater strength and the design of the pendulum squat. Using a band will compensate for the resistance profile of the machine, meaning you'll achieve greater levels of tension over the whole movement, rather than just two-thirds of it.

Hack squats are a bodybuilding favorite for good reason. When your goal is solely aesthetics, one might argue their use over the likes of traditional barbell squats as your key indicator lift.

There's a lower learning curve, most can focus better on their quads, and there's more confidence training closer to failure. But not all hack squat machines feel the best for everyone, and you'd be lucky to find one that allows for much adjustment.

The biggest problem you might encounter? The sudden load increase as you squat into the hole at the bottom.

Sometimes the hack squat can irritate the knees. Why? It's the angle of the foot plate coupled with your knees driving more over your toes. For those with knee issues, it's enough to put you off any hack squat for life. Try the reverse band method instead.

The difference with getting positive variable resistance from a band versus using the band for assistance is largely in its feel. While adding band resistance increases your speed on the way down, the reverse band method feels smoother and should be thought of as a method of unloading certain portions of an exercise.

Adding a band to your hack squat will help you fire out of the bottom position while at the same time accommodating for your greater strength at the top of the movement.

I'd recommend no more than a 20% difference in the load at the top versus at the bottom, but that requires you to know the exact resistance of your band at its full stretch when hooked up to the machine. That requires stretching the band and measuring it with luggage scales, which is a pain.

So you're better off just going by feel. You want your hack squat to feel just as challenging at the bottom as it does at the top, and to be pain-free throughout. Next time, start with your previous weight loaded on the hack squat, and something like a one-inch band to unload you at the bottom. Make adjustments from there, either by adding more weight to the machine or changing the band.

There are various ways to attach your band to a hack squat; it depends on its design. If it has band pins, use those. If it doesn't, you may need to get creative.

If you have the ability to load up bodyweight exercises, do so. This is one of the biggest mistakes I see in the gym. Exercises like sissy squats and bench sissy squats are rarely performed beyond bodyweight. It's no wonder why you're stuck doing the same reps month after month!

Add resistance to your bodyweight quad-builders, and you'll not only get better at them, but your quads will have no choice but to start growing again.

Use heavier dumbbells over time or higher strength bands and watch the magic happen. Just remember, bench sissy squats are all about finding the tension. If you're trying to go so heavy that you've lost that sensation in your quads, then go a little lighter.

The same holds true for all of the machine leg builders above. 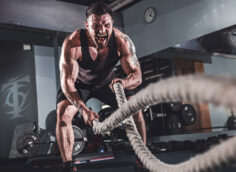 Too much cardio can backfire, but so can avoiding it. Here's why metabolic conditioning will boost your gains, plus two workouts to try.
Metabolic Conditioning, Metcon
Jason Brown January 9

This combo exercise will nail every part of your chest. Check it out.
Tips, Training
Dr John Rusin February 2

Want to get in your cardio? Skip the treadmill and get in the squat rack instead.
Exercise Coaching, Tips
Martin Rooney March 31