Not every commercial gym machine is worthless, but here are four you should avoid at all costs. Most can easily lead to injury... and one of them is an outright scam. Take a look, then check out the safer, more effective alternatives.

The ab crunch machine brings together two American novelties – the idea of achieving a chiseled six-pack and doing it while sitting on your ass.

Whether you're for or against training the spinal column into relative flexion, this machine unites all core-training schools of thought in its blatant disregard for what intelligent movement methods should actually entail.

When was the last time you concentrated on setting the machine up according to your specific anthropometrics? Unless the setting on the machine is physically causing him pain while he's doing it, the average gym goer will power through his sets just fast enough to hightail it to the next exercise.

The ab crunch machine is no different than any other machine, but setting up in a less than optimal position can create brutal and inefficient force planes. These unwanted forces could increase the chance of injury, especially with high rep ranges and frequencies, as people do with core training movements.

When setting up in a relatively forward-flexed starting position at the spine and pelvis, as opposed to being slightly extended (usually preferred by the spinal column), the only way you can train is by going into hyperflexion of the spine. This can play a role in lower back pain and dysfunction.

Before you write off this machine for good, though, check yourself... literally. By spending an extra few seconds to determine the most advantageous setup for your specific body type, the crunch machine can go from a potentially debilitating movement to a results-producing method for abdominal training:

This exercise uses accommodating resistance to overload your rectus abdominis with a fraction of the external load while training your abs to work from a neutral pelvic position. If you're using a cable machine, try this trick:

Have you ever wondered about the true origins of the lower back pain experienced by nearly 80% of Americans at some time or another?

No, I'm not going to blame seated back extensions for this number, but I will attribute most of that statistic to the lack of spinal postural awareness in the gym and in daily life. This is a real problem that's getting worse, and machines like the back extension aren't doing society any favors.

Using the back extension machine isn't that much different, biomechanically speaking, than picking a heavy object up off the ground with the most dysfunctionally heinous rounded-back form you can imagine.

Imagine a really ugly barbell-loaded good morning movement with the knees locked out, the hips not translating backward, and most of the stress going right through the lower lumbar segments as the movement returns to a neutral position.

No one with any hopes of walking without a permanent limp would be caught dead loading up this type of dysfunctional movement pattern. But that's essentially what many people are doing when loading up heavy on the back extension machine.

To generate any movement whatsoever out of the seated starting position, most back extension machines require that the thoracic and lumbar segments must start out in a forward flexed position to increase the available range of motion. Remember, in the seated position, the available range of motion of the spine is largely limited compared to the fairly large range available when the hips move in conjunction with the spine.

You know what's not limited in a seated position? Spinal flexion. When using the machine to target the spinal extensor groups that run from the tailbone all the way into the skull, most of the movement requires moving from a hyper-flexed position to a neutral spinal orientation, if you're lucky.

Realistically, most people never break past a neutral spinal position at peak contraction, making this machine not only potentially dangerous when executed with no rhyme or reason but also highly inefficient when targeting the large slabs of muscle responsible for extending and stabilizing the spine.

There are safer and far more effective options out there. You could literally program any type of back extension movement into your routine and achieve far better results than the back machine.

However, for the most translatable strength and hypertrophy gains in the spinal extensors, utilize spinal extension movements that incorporate terminal hip extension, like the banded hyperextension in the 45-degree Roman chair.

Not only will your erectors get a massive pump from the accommodating resistance, but your glutes and proximal hamstrings will also aid the movement, helping this assistance movement power your big lifts.

Machine manufacturers really threw away any semblance of moral or ethical practice with the widespread production of hip adductor and abductor machines.

Preying on the insecurities of uninformed and vulnerable women is a staple of dirtbags in any field, but when it hits the fitness industry, I tend to take it more personally.

No matter how many times the deeply rooted belief of spot reduction is debunked with scientific research and millions of anecdotal cases, this misleading misconception keeps coming back.

Though everyone has their own specific pockets of stubborn body fat, one troubled area for many is the thighs. But no matter how intense these movements are trained, nothing really ends up happening in terms of body recomposition, except for developing some seriously strong hips for leg wrestling and other things.

Along with a lack of fat loss around the inner thigh and lateral hips, the functionality of these machines is pretty atrocious unless you're an experienced strength athlete with acute hypertrophy as a goal.

The gluteal group, which most people attempt to target when using the hip abductor machine, is actually placed in an insufficient position to carry out its primary actions of hip extension and abduction.

Generally, when targeting a muscle group, the plane of movement needs to match up with the fiber orientation of the muscle. When these two variables don't match up, it's open season for secondary compensatory muscles to take over the movement, thus losing all hopes of targeted results.

It gets worse. Want to tighten down your IT-band complex even more than it already is from sitting at your desk all day? Hit up the hip abductor machine on a regular basis. The tensor fascia lata, the muscle that directly attaches proximally to the IT band, will become overactive during the seated hip abduction movement, causing a chain of potential problems down the line.

Like its counterpart, the hip adductor machine places the targeted hip adductors and medial hamstring group at a biomechanical disadvantage. Because most of these muscles attach to the pelvis, misalignment occurs when placed in a seated position, decreasing the likelihood of targeting this muscle group.

Skip the hip adductor and abductor machines. If your goal is to target the lateral hip musculature while also incorporating the adductor and medial hamstring groups, you can kill two birds with one stone with the lateral lunge.

Not only does the lateral lunge load the lateral-hip stabilizing gluteal group through a larger range of motion at the hip than the machine, but the adductor group is also tensioned under eccentric loading, which is great for hypertrophy and translatable strength.

In the first two semesters of physical therapy school, a portion of the curriculum includes the foundations of biomechanics and ways to translate these properties into the real world.

The one point that was absolutely nailed down over the course of that year was avoiding the worst possible situation for the longevity and health of the lumbar spine. Above all else, avoid moving through the terrible triad of lower back movements: simultaneous flexion, rotation, and side bending, especially under loading.

In other words, avoid the seated ab rotation machine!

The seated ab rotation machine superficially seems to have some merit due to the rotational component that supposedly targets the internal and external obliques on opposite sides simultaneously. Unfortunately, everything from positioning to safety, efficacy, and effectiveness is wrong with this abominable waste of space. The seated position isn't advantageous for your aesthetics or general orthopedic health.

More specific to the ab rotation machine, the force planes just don't match up (again). Sound familiar? The internal and external obliques encompass the anterior and posterior lateral trunk, attaching to multiple sites throughout their large surface area and distribution.

The internal and external obliques are adjacent layers of core musculature positioned in a relatively perpendicular orientation to one other. This orientation doesn't include being horizontal for either of these two muscles.

To target the obliques in this machine, spinal flexion must be incorporated into the movement. (Remember that thing about the terrible triad of positioning for lower back health?)

If you want to argue that this dynamic rotational movement targets the deepest layer of the abdominal wall, think again. Though the transversus abdominis fiber orientation is indeed horizontal in position, this muscle is responsible for tonic contractions, meaning it wouldn't be optimally activated or stimulated for functional or aesthetic purposes during the violent rotations afforded by this machine.

Finally, the amortization phase of this movement creates a slippery slope for both soft tissue and structural spinal health. "Amortization" is the phase between the eccentric and concentric contractions and largely depends on fine neurological functioning.

But when cranking out rep after rep on the ab rotation machine, you're actually frying the neural system that would normally stabilize the spine properly. You then lose the dynamic stabilization your spinal segments and core need to protect themselves against the external load.

Want to target the entire core, including the shoulder and hip complexes, in addition to the abdominal wall? Give the Pallof press a shot. This anti-rotation movement will challenge your static and dynamic stability of the pillar all at once.

Think it looks too easy? Load it up and don't budge an inch except for controlling your arms in a smoothly coordinated manner. The internal tension you'll be able to achieve will skyrocket your heart rate, burn your core, and make you wish you were back on the ab rotation machine.

Five great exercises to hammer your quads. Some you know, some you don’t! Check ‘em out.
Bodybuilding, Training
T Nation July 31 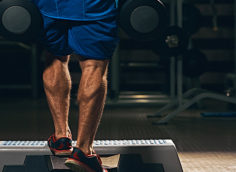 A complete guide to help you build your chest, even if your genetics suck. Check it out.
Bodybuilding, Chest, Training
Clay Hyght, DC October 13 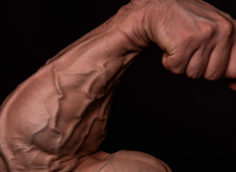 Here's why everyone needs to be doing some grip-focused work, plus a new twist on a classic grip-builder.
Training
Dan North July 31