The classic dumbbell flye is perfectly fine, as long as you realize it forfeits a piece of your force curve.

Remember, the chest fibers run in a generally horizontal fashion. When you hold on to a pair of dumbbells, the force angle follows that fibrous path – in theory at least – because of the movement pattern. In truth, the force angle is directly downward, bearing on the shoulder joint. 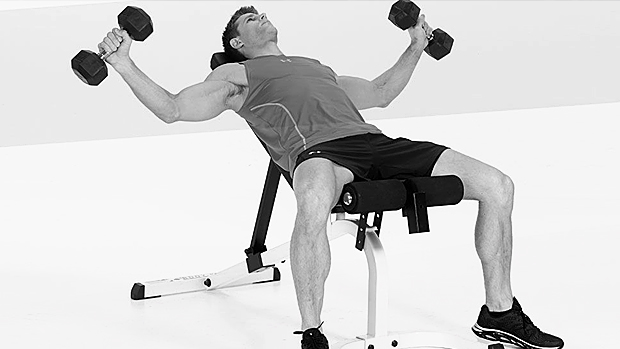 In other words, you're attempting to do a horizontal movement using a relatively vertical load. To clarify, let's exaggerate a bit. Imagine you were going to try flyes with 100-pound dumbbells.

There's a high chance you couldn't perform a deep flye movement with that kind of weight because it's just too heavy for the pattern. But, you COULD hold them there at the top of the lift for as long as you want because that position doesn't stress the actual muscles.

However, when you switch that force angle to a horizontal one – in the form of a cable flye where the cables are trying to pull your hands apart rather than the dumbbells simply pressing downward – it can act as a game changer for your activation levels.

Not only does this better match the direction of the pec fibers for better quality reps that use more of the force curve, it also makes it much easier to keep good form, even when you're losing steam.

The video gives a demo of conventional incline cable flyes, but also shows an easy way to extend a set by simply converting the flye into a cable press to get some help from the triceps.

Christian serves up 3 innovative methods for taking your gains to new heights - one for biceps, one for arms in general, and a Bizarro World method that involves doing the opposite of everything you now do.
Arms, Bodybuilding, Training
Christian Thibaudeau March 24

Rest periods are for wimps. Okay, that's not quite true. But there is a better way to use them. Here's how.
Metcon, Tips, Training
Christian Thibaudeau August 9

There's a time to go big or go home, but not for quadriceps isolation. Here's why.
Bodybuilding, Legs, Tips, Training
Lee Boyce May 3