The floor press – a barbell bench press that you perform without the bench – has become a staple exercise with many high-level powerlifters, but anyone who wants to get stronger and build muscle can benefit from it.

Interestingly, it's not a new exercise; it's simply been resurrected. Back before lifters had benches, the floor press was the only chest press they could perform. So it's been around for more than 100 years, making it much older than the bench press itself.

It's a very effective movement to build pure pressing strength, along with muscle mass in the chest, shoulders, triceps. To understand why it's effective, it's important to understand force production when you lift a weight.

3 Factors That Contribute to Force Production

Pressing from the floor reduces the contribution of elasticity and the stretch reflex. If you pause with your upper arms on the floor for a second or two at the start of each rep, you can reduce the contribution of the stretch reflex by as much as 90 percent. That's why most of us will be weaker pressing from the floor than we are when we press from a bench, even though the range of motion is shorter.

But by inhibiting the stretch reflex, you rely almost entirely on the actual contraction of the muscles during a floor press. The result is a more forceful contraction, and lots of gains in size and strength. In that sense, it's the upper-body equivalent of a deadlift.

This doesn't mean that you should drop regular bench pressing in favor of the floor press. If you do, you'll lose your ability to use the stretch reflex to your advantage, which will decrease performance and increase injury risk.

Build your back and prevent strength imbalances. Here’s everything you need to know.
Back, Bodybuilding, Powerlifting & Strength, Training
Mike Robertson October 4 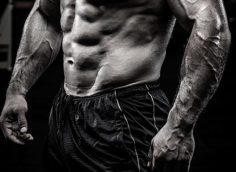 Short on time? Do one of these heavy hitters.
Training
Tanner Shuck March 13

Not only will this workout rip off the fat, it'll teach you to breathe correctly when fatigued. Check it out.
Metcon, Tips, Training
Eric Johnson & Ryan Johnson January 4

The Canadian Vin Diesel shows you which type of contraction (constant tension, stretch reflex, etc.) to use with different movements, along with explaining why you should absolutely keep your training sessions under 60 minutes.
Bodybuilding, Powerlifting & Strength, Training
Christian Thibaudeau July 2