Way back in 2004, in our Neanderthal No More series, Mike Robertson and I advocated stretching for the pecs, usually in the form of a doorway stretch.

Stretches to maintain length of both the pectoralis major and pectoralis minor are really important – especially in the weight-training population, where Mondays, Wednesdays, and Fridays are declared national bench press holidays in all 52 weeks of the year. Simply put, everyone presses too much and pulls too little.

However, what few people (including Mike and I, circa 2004) realize is that in the process of stretching out the pecs (particularly pectoralis major) in this fashion, you run the risk of irritating the anterior shoulder capsule, particularly if the shoulder blades aren't stabilized. As the picture below shows, the attachment point of the pectoralis major is further down the humerus.

Many of you might not even realize that there is such a thing as the shoulder capsule, so to show you that it isn't just some purple unicorn I pulled out of my back pocket for the sake of article content, here's a picture:

Essentially, it's a fibrous structure that envelops the joint and works in conjunction with the labrum as a static stabilizer of the joint (the rotator cuff muscles are the dynamic stabilizers). The capsule encompasses multiple ligaments acting at the glenohumeral joint, and the tautness of each of these ligaments is dependent on the positioning of the humerus in different planes of motion.

While many folks never bother to consider the role of the capsule in shoulder function and health, it's actually implicated in numerous chronic conditions. You've probably heard of frozen shoulder; it's scientific name is adhesive capsulitis. Essentially, the capsule contracts and scar tissue develops, restricting movement at the shoulder.

Conversely, some folks have capsular hypermobility – and surgery may be indicated to tighten things up (thermal assisted shrinkage procedures in the early 2000s didn't have good clinical outcomes, though). Some surgeries also involve capsular shift procedures, too.

A last, but still important fact to consider is that different populations will exhibit capsular tightness in different places. Perhaps the best example is in overhead throwing athletes. The distraction forces on the posterior capsule (and rotator cuff) at the throwing release point are dramatic, and this repeated deceleration microtrauma can lead to thickening and shortening of the posterior (backside) capsule. You'll sometimes see this same problem in a weight-training population, too.

As a general rule of thumb, the humeral head always migrates away from capsular tightness. In other words, if your inferior capsule (bottom portion) is restricted, your humeral head is going to translate upward and increase the amount of impingement present at the shoulder. And, specific to the example I just outlined, posterior capsule restrictions can lead to anterior shoulder pain (if left unchecked, though, it can eventually become posterior shoulder pain in the form of a SLAP lesion).

All that considered, what I'm trying to illustrate is that a) capsular health and function is very important and b) it's best to not force this sucker through unnatural and extreme ranges of motion, particularly when you consider that you might not be sitting in "neutral" from the start because of adaptive changes.

This relates directly back to the doorway pec stretch example, where you're essentially forcing humeral extension on a scapula that isn't moving. That said, if you're going to stretch this way, you want to make sure that your shoulder blades are retracted and depressed in order to posteriorly tilt your scapulae.

To take it a step further and make it even safer, you can use a great stretch I learned from Phil Donley, a brilliant clinician who's a long-time rehabilitation consultant for the Philadelphia Phillies who's seen loads of multi-million dollar arms.

Set up with one arm at a time against the corner of a wall or the edge of a doorframe. You use the edge to push the head of your humerus posteriorly (minimizing stress on the anterior capsule) and then simply turn your head in the opposite direction to intensify the stretch. Here's a video:

As with the original doorway pec stretch, you'll want to retract and depress the scapula.

Again, both of these stretches emphasize the pectoralis major. While it's a problem area for many, in reality, the pec minor is a bigger culprit in many cases. Have a glance at the attachment points of the pec minor: the coracoid process of the scapula, and the 3rd-5th ribs:

As you can tell, if the pec minor is restricted, the entire scapula is pulled forward (anterior tilt). However, what's hard to appreciate is that the pec minor is also important because it works with the rhomboids and levator scapulae in downwardly rotating the scapula.

If one of these muscles gets short, stiff, or balled up with soft tissue restrictions, it restricts upward rotation of the scapula. Good upward rotation is absolutely essential for safe and pain-free overhead movements. Logically, it follows that it's wise to include stretches specifically devoted to pec minor.

My personal favorite stretch for the pec minor involves the assistance of a partner and two half-foam rollers (you can just cut a regular foam roller in half). One of the "wedges" serves as a head support, and the other is positioned between the shoulder blades as the athlete is on his back. The athlete consciously retracts and depresses the scapulae around the wedge while the partner pushes the superior aspect of the scapulae further down in that direction to increase the stretch.

Keep in mind that you won't feel a crazy stretch on pec minor as if you were stretching your hamstrings, quads, or some other prominent (and larger) muscle group. Just trust that it's working.

If you don't have a partner or pair of foam roller wedges, an acceptable (but not as effective) option is to do a corner pec-minor stretch.

Again, you won't feel a deep stretch, but just trust that it's working (provided you're retracting and depressing your shoulder blades).

These static stretches are all well and good, but what you may not have considered is that each time you do a horizontal pressing movement (i.e., bench press or push-up variation), you're also stretching your pecs on the eccentric (lowering) phase of the movement.

What I want you to take from this article is that your horizontal abduction and extension of the arms – the two movements that comprise the eccentric component of bench presses and push-ups – MUST occur alongside scapular retraction and depression. In other words, in the context of pressing movements, your arms should never move independently of your scapulae. Ensuring this doesn't occur will spare your shoulder capsule, rotator cuff, and labrum.

So in doing good push-ups, you want to think about pulling yourself down to the ground with your upper back (imagine pre-tensioning all your scapular stabilizers).

The same is true of a good bench press; imagine pulling the bar down to the base of your sternum (lower rib cage). I also cue athletes to "go up and get" the bar rather than just waiting for it to come down to the chest.

I even applied this idea to faulty technique patterns on rowing motions in 5 Common Technique Mistakes.

As you can see, lengthening the pectoralis major and minor – either when stretching or actually performing exercises – isn't as straightforward as you might think. Apply the principles from this article, and you'll be one step closer to keeping your shoulders healthy for the long haul. 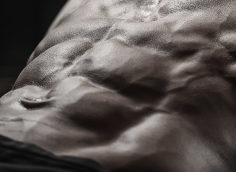 Yes, you can target the lower fibers of your rectus abdominis. Here's how.
Training
Gareth Sapstead April 13

Sit on your butt a lot? Have low back issues? You need this simple stretch.
Mobility, Tips, Training
Tessa Gurley September 17

If you have ankle mobility issues that affect your squat, you need to determine what kind of problem you have before treatment. Here's how to do it.
Exercise Coaching, Mobility, Tips
Dr John Rusin October 2