What's the best dumbbell exercise that almost nobody does?

For some reason the goblet squat has a reputation of being a fluffy exercise that only the elderly or those with severe pain do. But this couldn't be further from the truth. When trained hard with heavy-ass dumbbells, it's one of the most effective lower body moves there is. It'll also give you a sick leg pump.

So why do most lifters avoid it? Well, other than the fact that it reminds them of a physical therapy office, it comes down to incompetence. In addition to hammering the legs, this squat variation can make the heart rate sky rocket. Your work capacity needs to not suck and your upper body needs to be strong.

Holding a heavy dumbbell in an anteriorly loaded position requires huge amounts of shoulder stability and spinal stiffness... and on top of that you actually need to be able to squat the weight itself.

Think your barbell squat is strong? Take the heaviest dumbbell you have in the gym and see how many reps you can knock out with it. Better yet, use this move as the main lift for a secondary leg day and enjoy the strength, hypertrophy, and motor control that comes along with it. You'll dominate your standard squats when you add a different loading tool.

But be aware – the setup off the floor will become your limiting factor. So instead of hoisting that SOB up like your competing against Eddy Hall in the World's Strongest Man, use a box or elevated surface to unrack the dumbbell just as you would a barbell out of the rack. – Dr. John Rusin

I've written about this before in my book, "Your Workout Perfected." Aside from its shoulder-strengthening benefits, this exercise also helps you improve your rotational strength and hip rotational mobility. It'll also increase your ability to transfer force across your body, which is key in rotational athletic actions like punching, batting, throwing, swinging, and even sprinting.

The other great thing about this exercise is its single-arm and push-press variations (see video). Doing this with one arm will create a greater demand on your core as you maintain your body position during each rep.

You can also do a double-arm or single-arm rotational push-press by slightly bending your knees to start each rep, then quickly reverse the motion, exploding into the dumbbell(s) and driving the weight overhead with your arm(s) and legs in a coordinated fashion. The push-press variations are a bit more athletic and allow you to make this exercise more power oriented. – Nick Tumminello

A couple years ago, triceps were one of my weakest points. I constantly tried different exercises and protocols till I found something that worked well for me. No exercise has had as much impact on my triceps as PJR pullovers. I first learned about them from Paul Carter, and have done them every week since. There are two key benefits to this move:

This is a great way to stimulate hypertrophy and muscular endurance. You get that extra burn by changing the dynamics of the exercise and using your hips to assist with extra reps.

It's a combination of three different overhead press techniques. You might want to practice each technique with a lighter weight to build your confidence before hitting heavier weight.

Do these three exercises without rest in between:

Try to add some weight each session, or add a rep each time instead. It would look like this:

If you're more advanced, hit as many of each exercise as you can before you HAVE to change to the next one. You'll probably get three good sets like this, then when set 4 and 5 start getting ugly, extend your rest times. – Tom Morrison

Use dumbbells for conditioning by combining two exercises.

If you normally need a lot of rest between your barbell work, or if you generally feel out of shape, this dumbbell exercise combo is for you.

The Burpee and Reverse Lunge Combo

There are two versions of this combo: one with the dumbbells placed in the regular hands-down position, and one with a hands-up position for the reverse lunge. The latter is more challenging. To make it harder, go faster or do it longer. If 30 seconds of this combo is too easy, try 45, 50, or 60 seconds. This isn't the time to go heavy.

Ideally you'd do the combo for time (30-60 seconds), and you'd perform several sets. This is perfect as a finisher. And it works well combined with other exercise combos that target the body in a different way. This would allow you to keep going hard for a longer time (3-5 minute rounds).

The push press is a great strength and power movement. But the single-arm dumbbell version turns this classic into one of the most effective full-body exercises there is. Just accentuate the eccentric – lower slowly. Think of these as heavy negatives for the upper body, but instead of having a spotter help you lift the weight on the concentric phase, your legs will assist you instead.

Why do it? This push press targets the entire body from head to toe. It combines explosive leg drive, core stability, and upper-body strength. And when performed as a one-arm movement, it creates a stimulus for anti-lateral flexion and rotary stability. The entire core must work overtime to stabilize the offset loading.

It feels like an overhead movement that combines a side plank and Pallof press. This can pay dividends not only for improving spinal health, shoulder health, and posture, but also for teaching you to lock your core in on other heavy compound exercises.

The single-arm eccentric accentuated push press also exposes and addresses a multitude of asymmetries and imbalance. Don't be surprised if you find the movement to substantially more challenging on one side of the body. Luckily, the more you do it the more it'll clean up those imbalances.

These are also brutal from a conditioning standpoint. You'll feel like you just ran several max effort sprints after just one set. So feel free to use them for work capacity, conditioning, and body composition too. – Joel Seedman, PhD

This movement fires up the central nervous system and recruits a monster amount of muscle fibers, yet it's underused and underrated. The most common types of jump squats come with their own set of problems that you won't have with this version.

The barbell jump squat often results in compromised mechanics because of the bar that lands on the spine, which can cause the knees to cave at the bottom of the rep. Even landing properly with a barbell on your back leads to unnecessary stress with each jump.

You could load goblet jump squats with any size dumbbell without compromising your mechanics. The front-loading also takes stress off the spine.

Weighted jumps are crucial for explosive athletes. And they're a great primer exercise that'll prepare any lifter for a squat session. Try 3 sets of 5 before your next leg day. – Calvin Huynh

It's unlikely that you've seen anybody doing a lateral throw, and that's a shame. It's great for developing both size and power in the traps and deltoids.

You'd do these almost like a standard lateral raise, except one arm at a time, and actually throw the dumbbell up to the same position you would a lateral raise. It's important to brace yourself throughout this movement.

Using something sturdy, like a bench or Smith machine bar, you can minimize body English as you throw the dumbbell up. Control the throw; don't toss it up so hard you yank your arm out of its socket or hurt your shoulder. Once the dumbbell stops and starts to fall back down, slow the dumbbell down as it drops.

This is a top favorite glute exercise of my client, Tawna Eubanks McCoy. 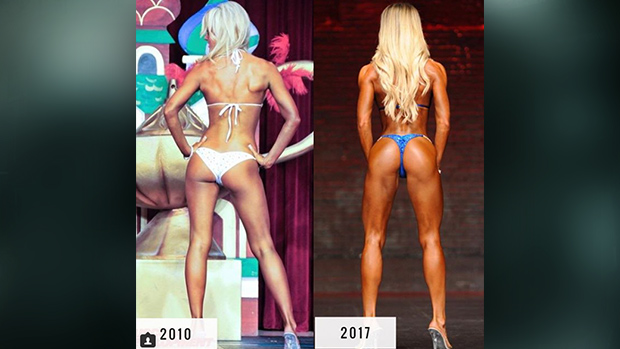 Most gym bros will assume it's a sissy exercise and won't bother trying it. But if they were to try 3 sets of 20 reps with 60 seconds rest using a 100-plus pound dumbbell, their quads and glutes would let them know it's legit. 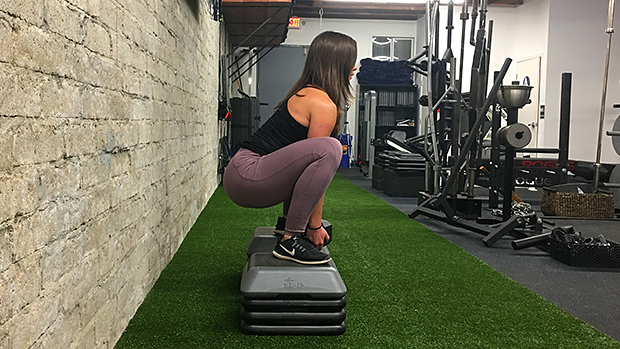 Keep your knees out and chest up. Push through the heels, sit the butt straight down, and let the knees migrate forward and outward. Then descend as deep as possible without losing good spinal position.

Do 3-4 sets of 8-20 reps. Want more quad? Elevate your heels on 10-pound plates for a "constant-tension" style where you don't quite lock out at the top. Superset with dumbbell frog pumps if you want a serious glute pump. – Bret Contreras

It's not exactly a skull crusher because you do it by lowering the dumbbells to each side of your skull. But basically you keep your elbows perpendicular to the floor while lying on a utility bench, palms facing each other, and perform extensions. Here are the advantages:

This is one of my favorite exercises for anyone looking to make their pecs more "pecy." I've long been a champion of dumbbells over barbells for pec development. Barbells are fine and dandy – especially since they allow lifters to use more weight – but they're limited in their ability to fully target the area. It's basic anatomy.

The pectorals, specifically the pec major, both flexes (clavicular head) and adducts (sternal head) the humerus. Yes, I realize it does other stuff too (it internally rotates the humerus and anteriorly tilts the scapulae), so to keep the insufferable anatomy nerds from having a conniption, there you go.

If chest size is your goal, pressing with a barbell can be limiting because it only works one function of the pecs... humeral flexion. The dumbbell squeeze press, on the other hand, incorporates both functions. You're pressing, but because you're actively squeezing the dumbbells together (hard) throughout the duration of the set, you're really kicking things up a notch.

I'll typically use this exercise as an accessory movement on bench day, after I bench. Come on, this isn't amateur hour.

Now, we COULD make the case that using an incline targets the upper chest area more, but I'd just make an effort to switch it up every so often: incline, flat, decline, whatever. Your pecs should be able to cut diamonds now. – Tony Gentilcore

This is a great exercise for the often neglected short head of the biceps. The big advantage of spider curls over preacher curls is the constant tension, especially at the top portion of the movement.

There are two slight variations and coaching points to further stimulate and load the muscle to illicit a greater training effect. Make the dumbbell heads touch during the set, and try to push the dumbbells together – while at the same time squeezing and contracting the biceps. Pushing the dumbbells together really helps to enforce this. At the top of the lift, pause for a second before beginning the eccentric (lowering) phase.

A great way to extend the set once you fatigue is to change the force angle by moving the elbows further back and shortening the range of movement. This will allow you to get a few extra reps. – Michael Warren

Loaded push-ups with plates or bands are awesome... if you get the resistance in the right place. Here's what you need to know.
Tips, Training
Joel Seedman, PhD September 14

You don't need fancy equipment to stay fit or get stronger. Even in the most dire circumstances. Check this out.
Metabolic Conditioning, Training
Craig Weller December 19