I started performing heavy dumbbell rows back in college but never realized how important they were until I stopped doing them.

In 2002 I graduated from college, bought a home, and moved away to start a new job and raise my family. Due to the move, I had to start training in a large commercial gym for the first time in years, and I inadvertently stopped doing heavy dumbbell rows in favor of some new equipment I now had available to me.

I was about a month out from the 2002 USAPL Nationals and went to pull some heavy deadlifts to see how I was progressing. For the first time in my competitive career, I had the bar slip from my hands on all my heavy singles.

I was pulling around 700 pounds at the time and had never had grip issues before, so it befuddled me that I couldn’t hang onto the bar at lockout for a heavy single. I was ripping the bar from the floor only to have it peel its way from my hands near the top.

After the training session I tried to figure out what had changed in my training that could account for such a dramatic loss of grip strength. I pored over my training logs from the previous several months and realized the only significant change was the deletion of dumbbell rows from my training.

I quickly added them back in, and at Nationals a month later I went 9 for 9 and pulled all three deads without any grip issues whatsoever.

From that point on I was committed to keeping dumbbell rows a part of my training. The commercial gym I was training at, however, only had dumbbells that went up to 150 pounds, so since I couldn’t increase the weight, I began going for rep PRs. This led me to performing sets of 20-30 reps without straps.

Later I started putting together my own garage gym, so I went looking for the biggest dumbbells I could find. I found a pair of handles that I could squeeze 225 pounds onto by using vice grips as collars. I started knocking the 225s out for sets of 25 reps and my upper back strength and size increased significantly. I also noticed my old problem with locking out my deadlifts had completely disappeared – I was able to easily finish any pull that I could get to my knees.

Around this time I became part of the EliteFTS team and traveled to London, Ohio to train at the compound with Dave Tate and Jim Wendler. During my first training session there, I performed a set of dumbbell rows for 225×25, and afterward Wendler asked me why I was doing them.

I explained to Jim how they vastly improved my grip strength and how that had carried over to improving my deadlift lockout, not to mention adding significant size and strength to my upper back.

Jim started doing the rows, became a fan, and started recommending them to some powerlifters he knew – and all reported immediate improvements in grip and upper back strength, which also carried over to their deadlift maxes.

Jim began referring to this exercise as “Kroc rows” and the rest is history.

Later, after searching without success for larger dumbbell handles, I approached my brother who’s an ironworker about making a custom pair of handles that could hold more than 300 pounds.

My brother found a pair of 36″ long double-threaded bolts that were actually used for anchoring large buildings. They were made from hardened steel and were long enough and strong enough to hold the amount of weight I needed. He welded some inside collars onto them and I began working towards the 300 pound rows that I’m now known for.

While pursuing a 300 pound dumbbell row may sound silly, it’s no coincidence that once I began really increasing the weight and reps on the exercise that my deadlift climbed from the low to mid 700s to over 800 pounds, all while remaining in the 220-pound class.

As mentioned, Kroc rows dramatically increase your grip and upper back strength, both of which carryover well to increasing the deadlift.

Furthermore, performing them without using straps for high reps works your forearms and grip strength better than anything else I’ve tried.

Finally, they’re great for adding thickness and width to your upper back. My back is my strongest body part on the bodybuilding stage and Kroc rows are the primary reason why.

Of course, Kroc rows not only help bodybuilders and powerlifters, but also strongman competitors, or anyone else looking for strength that carries over well to lifting and moving heavy objects in everyday life.

I’ve used my back strength to carry engine blocks, furniture, washers, and even a fully loaded refrigerator all by myself. There’s no doubt that possessing a very strong upper back will not only make you much more powerful in the gym but in the real world as well.

Anyone that’s ever watched me perform a Kroc row or tried them themselves knows that this isn’t the dumbbell row that your golf-shirt wearing, buck-o-five weighing, certified personal trainer has taught you how to do.

There’s no “pulling back in an arc” or “squeezing for a two-count at the top” while holding a shiny chrome 15 pound dumbbell. No, Kroc rows are all about heavy weight, high reps, plenty of sweat, and sometimes even some blood.

While the form may be looser than your standard dumbbell row, don’t believe for a minute that you won’t be working the desired muscles. Anyone would be hard pressed to move a weight from arms length to chest in a bent over position without using their upper back musculature to a significant degree.

However, form still matters with Kroc rows, and there are a couple key technique points that must be followed to get the greatest benefit possible.

The first thing you need to concentrate on is getting a full range of motion by fully extending the shoulder at the bottom and really pulling it up and back at the top. This will ensure both a full stretch in the lats and a complete contraction.

At the bottom, really let your shoulder drop and you should feel the stretch in your lats and middle upper back. At the top, try to concentrate on retracting your scapula as far back as possible while pulling your elbow up and back, essentially trying to squeeze your shoulder blades together.

Your shoulders should be kept higher than your hips and your upper back should be at approximately a 15-degree angle to the floor. Think of putting an adjustable incline bench on the lowest setting – that’s the angle you’re shooting for – which will focus the movement primarily on the upper back.

The dumbbell should be pulled in a straight line from directly below your chest to the lower portion of your rib cage. I make a point to lightly touch the dumbbell to my rib cage at the top of every rep. A little bit of body English is acceptable but don’t use momentum to make the movement easier.

Explode the weight up using your upper back muscles, but avoid using a clean-type motion that uses momentum as this will reduce the amount of work your muscles are required to do.

You can perform Kroc rows with one hand and one knee on a flat bench or standing with your non-rowing hand braced on something solid that will allow you to maintain the proper angle of your upper back. You can post your hand on the end of dumbbell rack, a different piece of equipment, or any solid structure that lets you stabilize your body but still allows clearance for the large dumbbell.

I’ve found that once I started using dumbbells that weighed more than 225 pounds the ‘bell was simply too long to use on a regular bench, and I had to perform the rows using the standing technique to allow room for the three-foot long dumbbell to clear.

Contrary to popular belief, Kroc rows can be performed with wrist straps, and I often rotate back and forth between performing them with and without straps.

Obviously, performing them without straps is an excellent way to increase grip strength, but it’s perfectly acceptable to use straps to allow you to handle the most weight possible if your focus is on building upper back size and strength.

While I have done 175×40 and 205×30 without straps, there’s no way I could’ve hit my PR of 300×13 without throwing the straps on. Using straps allows me to focus on my upper back and hit it with the most weight and intensity possible without having to worry about my grip failing.

It’s best to rotate between both styles to reap the greatest rewards possible from Kroc rows. I often just perform them with straps one week then without the next week, and rotate back and forth on a weekly basis.

Regarding set and reps, I’ve found the benefits of Kroc rows to be greatest when working up to one all-out set to failure with each arm. I typically perform two to three warm-up sets and then go balls out for one max set, attempting to hit either a weight or rep PR every time.

I recommend shooting for at least 20 reps and not increasing the weight until you can get at least 25 reps with each arm. I’ve gone as high as 40 reps per set and my back was pumped beyond belief afterward.

Heavy high-rep Kroc rows can leave you gasping like a drop set of heavy squats, but I’m ordering you to keep going until you reach complete muscular exhaustion. This is where the physical and mental benefits of Kroc rows really come to fruition, but few lifters get there. You have to want it. And being a little crazy never hurts either. 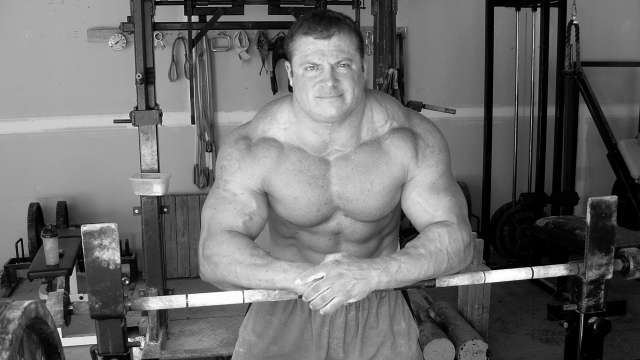 Follow these key technique points, use as much weight as possible, and go until you reach complete muscular exhaustion – and watch both your back strength and size increase like never before.