One Exercise to Hit Many Muscles

Imagine you saw a group of guys gathered near the dumbbell rack taking turns doing an exercise you've never seen it before, so you ask what they're doing.

In a funny, not-quite-German accent, one tells you, "I do zis every chest workout. Ze pump you get feels incredible, like being wiz a woman."

The second dude, with an even funnier accent, drops a 200-pound dumbbell to the floor after finishing his set. "Yeah, buddy! Love doing these with light... weight... baby!"

A wide British monster whose shadow covers half the wall chimes in. "I include this in every back workout. The stretch on the lats and the peak contraction are key."

The fourth lifter is super-ripped and would be a great fitness model. "I've been doing this for years and it really built up my serratus. It makes a huge difference in my ab poses."

Last, a real old-timer sits up after a set and tells you, "This'll stretch your ribcage and give you the kind of barrel torso Hercules would be proud of."

And that's the complicated, confusing, even contradictory world of the pullover.

Years ago, it was considered one of the most important exercises in bodybuilding. Nowadays, you're more likely to find a powerlifter on the pec-deck than you are to see a pullover being performed in the gym.

It's time to bring this forgotten classic back into regular rotation.

When The Pullover Began 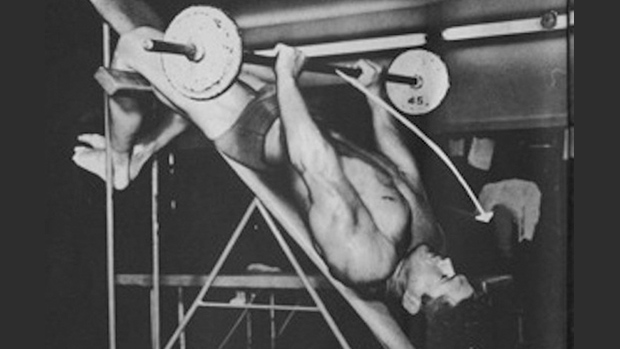 Around 1911, Alan Calvert, founder of the Milo Barbell Company and Strength magazine, declared the barbell pullover "the best exercise known for developing a deep chest."

Ever hear of the old "squats and milk" routine, where skinny beginners are told to drink a gallon of milk everyday while training with high-rep squats? Well, from day one, the plan was actually "squats and pullovers and milk." Seriously.

In the 1920s, a popular training strategy combined heavy, high-rep squats with light, high-rep pullovers as a fast track to building a large body. And it worked, because big lifting plus big calories are a solid combo.

If you were only going to do one or two upper body exercises (because low volume workouts were "in style" back then), the breathing pullover, as it was known, was considered a must-have.

The primary benefit was thought to be an expansion of the ribcage, from the deliberate deep breathing between reps that compounded with the deep breathing that took place during the squats earlier in the workout.

Whether or not that was actually happening, we'll discuss later. In any case, plenty of lifters reported great results from the "squats, pullovers, and milk" plan.

The Rise and Fall of Pullovers

Through organized bodybuilding's early years in the 1950s and '60s, bodybuilders continued to credit the pullover as being essential in sculpting their upper bodies.

A thick barrel chest was an ideal and the prevailing gym logic said you couldn't get there without lying on a flat bench and bringing a weight to arm's length overhead.

By the 1970s and '80s, bodybuilders had access to more fully equipped gyms with an assortment of specialized machines to better target specific bodyparts. One of those machines was the Nautilus pullover. 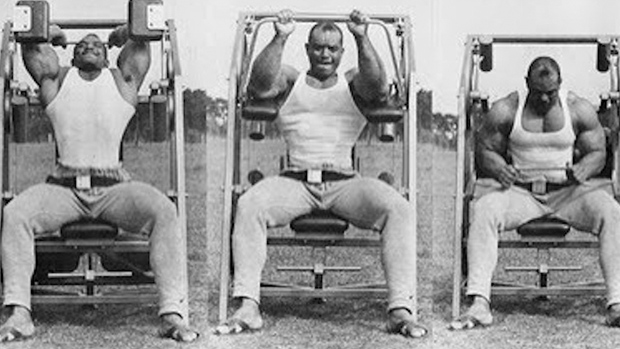 Invented in the early '70s by bodybuilding guru Arthur Jones, it was nicknamed "the upper body squat" as a credit to its relative importance among exercises.

But the new variety of machines also led to a lesser reliance on certain old standards, such as the free weight pullover. In the '90s, popularity of the lift dropped sharply, likely due to the rise of "functional training" and a general wussiness creeping further into gyms.

By the 2000s, non-lifting "exercise scientists" had successfully spread pullover-phobia, citing everything from impending shoulder injuries to plain old ineffectiveness, and the lift became something only seen in black and white photos.

Over the almost-hundred years of this exercise's history, we find some impressive names, even if the actual why/how-to advice is conflicting.

RegPark also considered pullovers to be a tremendous chest exercise.

Ronnie Coleman did heavy pullovers as part of his back training for years, and Frank Zane believes that doing pullovers from a young age helped to develop his serratus muscles, which became a focal point of his signature vacuum pose.

This isn't exactly a list of armchair lifters debating the best brand of Swiss balls. Let's at least consider following their lead.

Certified Shoulder Killer? Not Quite

The most common hesitancy is a fear of shoulder injuries. There's something nerve-wracking about lying down while holding a heavy weight with fully extended arms and then moving that weight precariously over your face.

Fortunately, there are a few simple steps we can take to make sure you get the most benefit:

If either of those are a "no," we need to work on your shoulder and upper back mobility. Once you know your body can function the way it's supposed to, take the exercise for a spin. 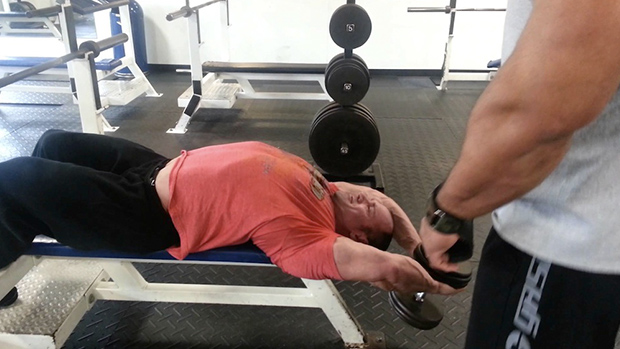 Lie on a flat bench the "usual" way, not with your body perpendicular and only the upper back across the bench. There's no major benefit, and the "hip drop" everyone uses as they lower the weight is more of a counterbalance than actual improvement in the ROM.

Grab a light dumbbell as if you were going to do a triceps extension, palms against the plates and the handle positioned between your thumbs and index fingers.

This should be as easy as squatting with an empty bar because we're basically learning the movement and testing range of motion, so 25 pounds or less should be plenty.

Start with both arms straight holding weight above your chest, and slowly lower the weight towards your head, paying attention to the muscles you feel stretching throughout the upper body.

Go as far back as is comfortable, while maintaining almost-locked arms, before pulling back in to the start position. As you're doing 12-15 easy reps, try lowering a bit further until your hands are at least level with the bench, if not slightly below.

Once you've done an easy set or two with the dumbbell, take a self-inventory and see how your shoulders, chest, and lats are feeling – what's tight, what's loose, what's getting pumped – and then repeat the test with a short barbell or EZ-curl bar using a pronated (palms-down) grip, again with a weight that should feel way too light.

If you're feeling any shoulder funkiness after trying light weight, higher reps, and different hand positions (a little wider, a little closer, neutral-grip with a triceps bar), then it just might not be a movement for you.

Sometimes exercises can be contraindicated for some people. That's fancy trainer-speak for, "You shouldn't do this, and if you do, you'll probably hurt something and blame me."

The dumbbell pullover is probably best known for being a chest builder, and it kinda makes sense that it should. Think about decline, flat, and incline dumbbell flyes, pec-deck flyes, and cable crossovers at all angles.

It's shoulder extension and/or adduction – moving the arms from "back there" to in front of the body. Sounds like it's all the same kind of movement pattern, right?

Contreras has since added to this idea, saying:

"In November 2011, a study came out in the Journal of Applied Biomechanics that showed the barbell pullover worked much more pec than lat.

I think the pecs are in a better position to actually move the weight, but down in the bottom position, the lats get a good stretch under load. The problem is that the torque diminishes as the movement rises, so tension dissipates off the lats rather quickly.

The machine pullover rocks because it keeps constant tension on the lats through the fullest ROM. It's like a free weight pullover and straight-arm pulldown combined. It's an instance where machinery allows for something cool that you can't do with free weights."

With this in mind, if we're looking to use pullovers for chest work, it would make the most sense to use them as one of the last exercises of the session after other muscles are already fatigued.

Even though, technically, pullovers seem to activate the pecs more than other muscles, it can be a tricky exercise that still requires other muscles to assist in the movement. Combine that with most peoples' poor mind-muscle connection, and there are too many variables in play to make it a good choice for the first exercise of chest day.

Finish your next chest workout with barbell or dumbbell pullovers 3-4 x 8-15. Be sure to focus on squeezing the pecs to initiate the movement up from the bottom position and work on holding the squeeze throughout the rep. 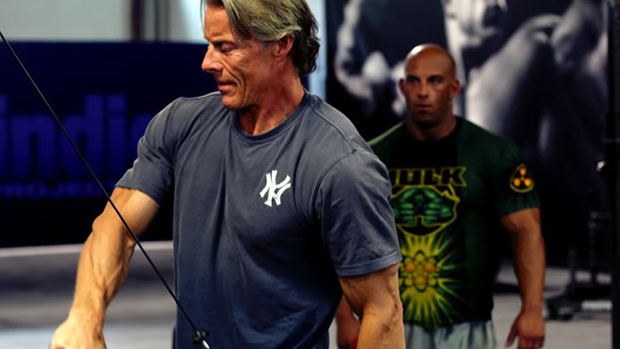 Pullover as a Lat Blaster

Ever heard the technique tip for pulldowns and rows, "Focus on pulling with the elbows, forget about your hands"? Well, that's a pullover. It's one big lat contraction from a position of maximal stretch with little to no forearm or biceps contribution.

A properly performed pullover, or one of a small handful of variations, is also the only way to isolate the lat muscle without significant assistance from the rhomboids, teres, traps, or any of the numerous back muscles.

Fact is, trying to build a big back without including this kind of isolation exercise would be like trying to develop great hamstrings without doing leg curls. You might get the job done, but it's faster and more efficient if you attack the muscle directly.

Because of this, pullovers tend to work best as the first exercise on back day. Pullovers can pre-fatigue the lats and improve muscle activation and mind-muscle connection.

Kayak rows (shown above) are a brutal variation of the straight-arm pulldown, incorporating not only the constant tension of cables but adding a unilateral element by alternating sides between reps.

Begin your next back workout with either dumbbell pullovers or straight-arm cable pulldowns for 4 x 8-12. Remember to focus on isolating the lats and feeling them work, so slow down the rep speed if necessary, exaggerate the peak contraction with cables, and emphasize the stretch at the bottom (or the top, with cables).

Remember all those folks in the 1920s who were "expanding" their ribcages expanding with breathing pullovers? Well, that didn't really happen. Sure, their chest/back/torso measurements increased, but it was from good old-fashioned muscle growth.

Pecscan grow, lats can grow, the intercostals can even grow (relatively). But cartilage? Nope.

The pullover just happened to be a great combination of ROM and resistance that was being done by eager new lifters squatting often and eating well.

So the "ribcage" ended up growing the same way, and for the same reasons, that your triceps started growing the week you learned what push-ups were. It was a new stimulus being placed upon muscles that had never been trained, so they responded quickly.

Use irradiated tension with front squats, planks, lateral raises, and split squats to build full body strength and testicular fortitude.
Powerlifting & Strength, Training
Nate Palmer July 24
Ten years ago, most people who trained with weights had never heard of a "strength coach." Oh sure, there were sports coaches who worked with athletes on performance. And there were famous bodybuilders who theorized on hypertrophy methods in the magazines.
Training
Chris Shugart June 9

From fat loss to strength to motivation, this iconic strength coach shares his wisdom on success, in the gym and out.
Motivation, Powerlifting & Strength, Training
Dan John September 29