Of course, not everyone agrees with Thibaudeau. We call these people “pencilneck dweebs” and have a penchant for giving them wedgies and sometimes even swirlies.

No, no, we’re kidding. The real disagreement arises when we discuss how to train the musculature of the shoulders. There are two sides here:

We get the point that Side #1 is making, but most of the experts in that camp come from the field of athletic training. That’s cool, but we’re not training for sports, not primarily at least. Nope, we’re training to build slabs of muscle, scare children, and attract womenfolk. And that means direct delt training.

Here are a few of the best exercises and techniques we’ve found over the years to deck your delts. 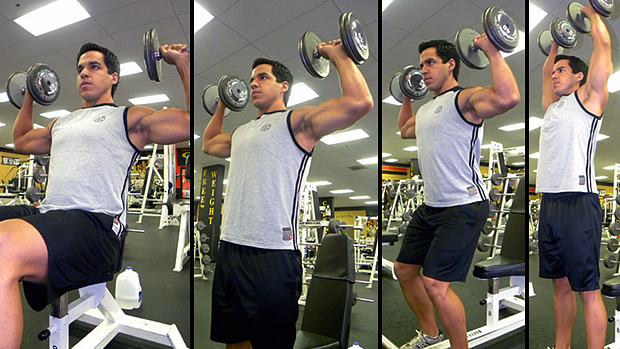 “I believe that the push press is the best delts exercise, bar none,” says Coach Thibaudeau.

Eric Cressey adds, “I’m a big fan of push presses. Some help from the legs on the concentric portion of the movement allows you to overload the eccentric portion by lowering under control with just the upper body.”

In this version, you take advantage of stronger body positions and carefully controlled momentum to take this classic exercise to a whole new level. Here’s how to do it:

Remember, a push press is basically a standing overhead shoulder press using a small dip of the legs and momentum to “kick” the weight up and straighten the arms.

Repeat once or twice more if you’re feeling froggy.

2 – The Perfect Lateral Raise, Plus Variations

Even the most ardent no-direct-delt-work strength and conditioning coaches think that the lateral raise is a good exercise to include in your training. The medial (side) deltoids are often “missed” in other compound exercises that stimulate the anterior (front) and posterior (rear) delt. And that’s not good if you want to get that wide shoulder / narrow waist look.

Problem is, most people don’t perform the lateral raise optimally. Here’s a few tips to get the most out of this exercises:

If you choose to do standard bilateral lateral raises, try this killer routine from trainer John Paul Catanzaro. JP explains:

“Lateral raises for your delts can be performed standing or seated. Sitting will help you avoid cheating as it’ll take the legs out of the movement. However, you may wish to extend a set and the subsequent time under tension (TUT) by first sitting to isolate the delts and then, when you’re completely fatigued and can’t complete an additional concentric rep, standing to get help from your lower body to squeeze out another rep or two.”

In other words, while seated perform a set of lateral raises. Then, when you fatigue, stand up and crank out a few more reps. Simple, but effective! 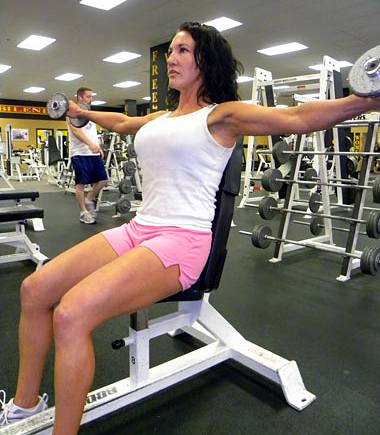 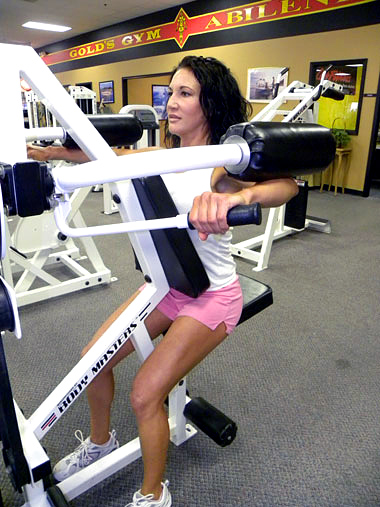 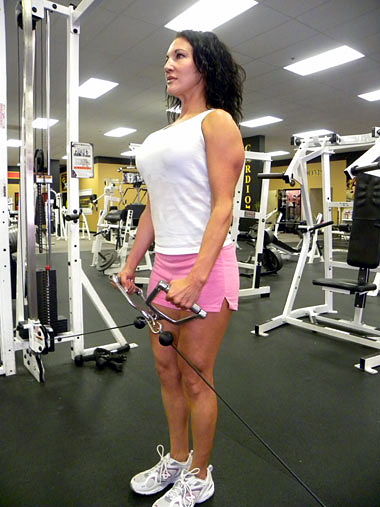 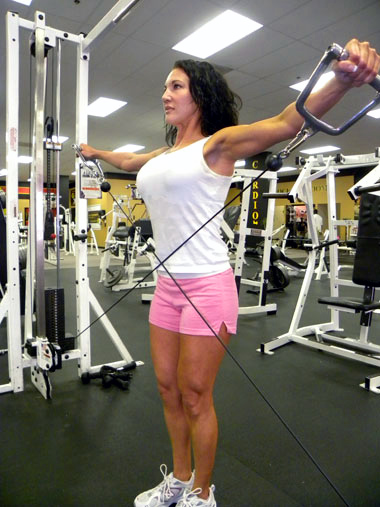 “What I find works best for shoulder hypertrophy is tri-sets,” says Poliquin. “The shoulders have intermediate-type fibers. They respond best to multiple exercises with short rest intervals, eight to ten reps, varying the motor resistance.”

With that in mind, here’s Coach Poliquin’s favorite quick fix for lagging shoulders: 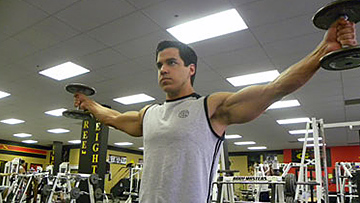 Need one more variation? Try thumbs-up lateral raises rather than the traditional palms-down version. This is a good one for those who feel pain or discomfort with regular lateral raises.

Michael Gundill notes, “Bodybuilders have front delts that are on average five times bigger than sedentary people. Their medial delts are three times bigger, and their rear delts are only 10 to 15 percent bigger. That imbalance translates into supraspinatus tendon abnormalities and is a source of shoulder pain.”

In other words, this is the old “mirror muscles” problem. Too many bodybuilders focus on the front of their body (chest, biceps, quads) and forget the back (back, triceps, posterior chain).

Sometimes even experienced lifters have this problem because of their overemphasis on chest training earlier in their lifting careers, leading to overdeveloped front delts and underdeveloped rear delts. The 3-2-1 routine will fix that quickly and bring balance to your shoulder development. 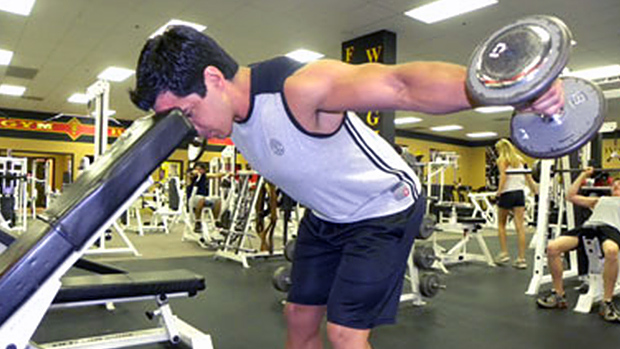 Bend forward at the waist and bend the knees. Leading with the elbows, raise the dumbbells without using any body sway or momentum and pause for one second at the top of the movement. You can place your forehead on an incline bench or similar to avoid lower back stress and reinforce good form. 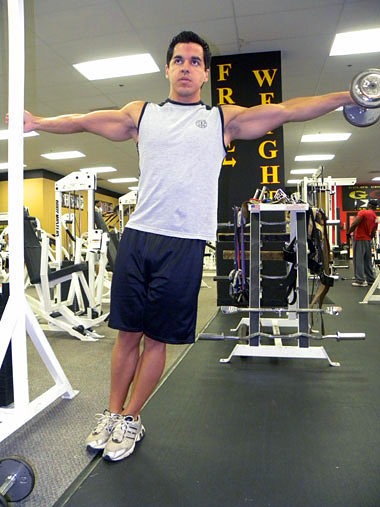 Grab on to a fat personal trainer (or anything that’s heavy and doesn’t move much, like a squat rack) and lean away in the position shown in the photo. Pause at the top of the movement and lower the weight under control. 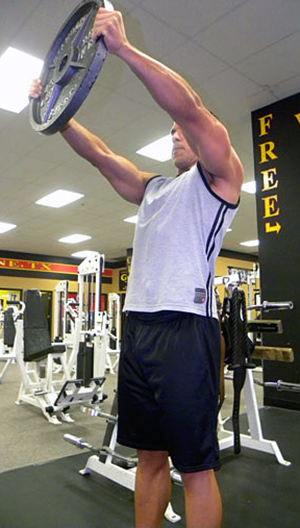 We picked this one up from the Westside crew. Grab a weight plate at the 3 o’clock and 9 o’clock position. Raise it until you can see through the hole, pause one second, and lower it under control. Keep the body rigid and avoid using body English. 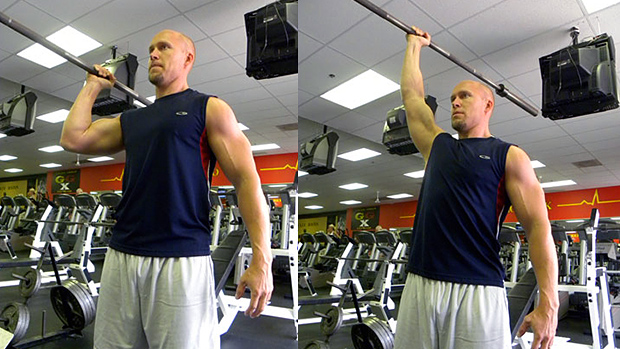 This is another wicked lift we learned from Coach Thibaudeau, whose background as an Olympic lifter and a bodybuilder make him The Doctor of Delts.

The exercise is simple but challenging. Just perform a one-handed overhead press using a barbell, not a dumbbell. The grip position will be similar to that of a javelin thrower.

The javelin thrower press has several advantages that make it a great pressing movement: 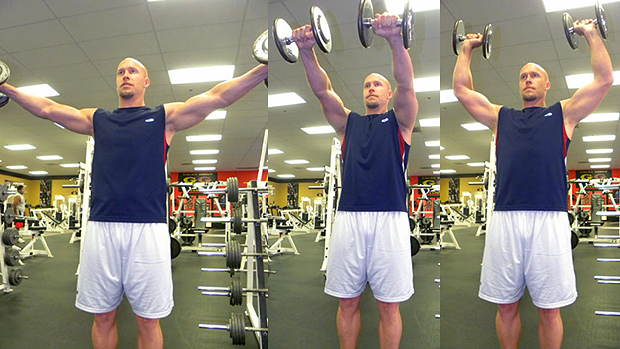 Another tri-set, you ask? Yes, and maybe there’s something to learn here from this pattern: When a large number of trainers and bodybuilders all suggest the use of one particular training method, then it probably means they’ve found a powerful, real-world strategy that works for just about everyone. For shoulder training, tri-sets rule.

Here’s another from Dr. Clay Hyght, medical professional and competitive bodybuilder for 17 years.

“The Delt Triad has been tested in the trenches for 15 years, and with great success,” notes Dr. Hyght. “Clients love it because it’s a perfect way to torch their delts in the shortest time possible. For that reason, it’s perfect for days when you need to train shoulders but want to get in and out in a hurry.

“More than the time efficiency benefit, people love it because the pump they get from the Delt Triad is insane! While a pump in and of itself doesn’t necessarily mean results, more time under tension and a bit of fascial stretching damn sure doesn’t hurt.”

Here’s how to perform the Delt Triad. Using the same set of dumbbells, perform:

“This triad works wonderfully for filling out your delts, making them nice and round,” says Dr. Hyght.

In most instances, the ideal use of the Delt Triad is after you’ve done a compound movement with heavy weight and lower reps. Five sets of five reps of standing barbell shoulder presses would work perfectly. Then move on to the Delt Triad to finish off your delt workout with a good, fascia-stretching pump!

“The shoulders actually recover very quickly. The delts are slow-twitch, so recovery can be fast. Frequency is important here. If you have a lack of shoulder development, you may need to train delts three days per week.”

Put these new exercises and workout routines to work today and say goodbye to your pancake delts!