When you're new to weight training, almost anything "works" simply because everything you try is a form of physical stress that you're not accustomed to.

But once you've graduated from the newbie phase, you've gotta get your shit together because if you don't, you'll just end up another one of those sad little guys who looks the same year after year.

There are many nuances of progressive overload – the foundational principle of successful resistance training. The more deeply you understand this principle, the more effective your training will be. And if you think progressive overload simply means adding more weight to the bar, you're missing out on a number of powerful tactics that will keep the progress coming for years.

This is the most obvious and most often used progression strategy for good reason: It works (at least for a while), especially for strength development.

This doesn't necessarily mean adding more weight every workout, known as linear progression. After all, even if you only add 5 pounds to your lift once a week, that adds up to 260 pounds of improvement in only one year, which is unlikely. So while adding weight is a valid strategy that should be exploited whenever possible, it can't be your only strategy.

This is the second most commonly used progression strategy, especially for lifters seeking increased muscle size. Also, being able to lift a given weight for more reps precedes the ability to lift a heavier weight.

This is the rationale behind a popular and effective programming concept, which is to first improve the number of reps you can do with a given weight over a series of workouts and only then add weight to the bar. Here's an example:

So with this type of programming, you first increase volume and later add intensity. Then you reduce volume (inevitably), followed by building that base back up, and so on.

One way to conceptualize this process is to think of a pile of sand – the wider the base, the higher the peak. If you've ever used a linear programming plan where you did a high-rep hypertrophy phase followed by a lower rep strength phase, that's exactly what you're doing – growing new muscle first (the base) and then teaching the brain how to recruit that new muscle against heavier loads (the peak).

This refers to keeping the weight, as well as sets and reps, constant, while gradually adding more total sets per exercise/per workout. This is a base-building tactic, since training volume is very highly associated with the hypertrophic process.

Once you've built new muscle, you have at least the potential to get stronger. One downside of adding sets is that your workouts will become longer, and obviously there are upper limits to how long you can train, which brings us to the next strategy.

Here you keep the load – as well as sets and reps – constant, while you work on gradually decreasing your rest between sets. This is known as the density method.

For any given lift, there's an "easiest" rep tempo that most of us habitually revert to in our attempt to add weight, reps, sets, etc.

People are all a bit different in terms of what's easiest. On squats, for example, some people find it easier to descend into the hole quite fast (known as the "dive bomb" method), while others find it easier to lower themselves into the squat rather slowly.

So, if you can normally bench press 225x8 with a fast, sloppy tempo, and you gradually develop the ability to bench 225x8 with a 4-second eccentric/negative followed by a 2-second pause culminating in an explosive concentric, you've progressed in a very meaningful way.

Increased difficulty, not just additional weight, is what changes the body. As an example, you may be able to do lateral raises with 40-pound dumbbells for a set of 12, but it requires some aggressive and creative body English. Maybe you're launching those weights up using a full-body maneuver that looks like a cross between a good morning and a power shrug.

So while you've managed to increase your loads, it's only because you've figured out a way to incorporate more muscle groups into the exercise. The target muscles (your middle delts) have long since been maxed out and don't receive any additional adaptive stress, no matter how much heavier you go.

If this is the case, it's well-worth it to occasionally do a phase of training – perhaps for 4 weeks, twice a year – where you work hard to clean up your lifting technique, even if you're forced to lower your weights in the process. That way, the target muscles receive a greater stimulus, and (bonus!) the associated joints and connective tissues get a break as well.

This final strategy is a "catch-all" category of methods designed to challenge you on a psychological level. This might strike you as a bit obscure, but you'd be amazed how valuable it can be. Here's how to apply this idea:

This pertains to lifting belts, but can also include knee sleeves/wraps, wrist wraps or straps, and other types of lifting garb. Occasionally, do training cycles beltless, for example, and see if you can improve your beltless personal bests on key lifts. (And dear God, don't wear your belt for curls and calf raises!)

We all have a warm-up routine that we're most comfortable with, and that's good. However, once you've established that routine, do some "rule-breaking" once in a while so that you don't become overly reliant on it.

This can mean a lot of things, but here's a simple example: You get stuck in traffic and don't have time for a full workout. Even worse, you forgot your gym bag. Rather than ditching the workout altogether, get in and do what you can, even if you're in your street clothes, and only have time to do a third of what you had planned.

Even if you can't hit your expected weights or reps, the 80-20 rule very much applies to lifting, and even a half-assed workout will prevent you from losing ground, which is worth a lot in the big picture.

Although dedicated lifters always try to progress every session, oftentimes this simply isn't possible. You're going to have days where things aren't going your way, no matter how hard you try.

When this happens, focus on damage control, do the best you can, and remain vigilant for opportunities to meet or break existing PR's of any type whenever possible. This might mean you make no progress at all for 3-4 sessions, followed by a great day where you smash your best performance.

Get a running start

When you start a new training cycle, resist the irresponsible urge to go balls-out right out of the gate. The new program variables you're going to use (exercises, rep brackets, etc.) are a relatively novel stimulus, and novelty is a form of intensity all by itself.

This means you can afford to leave a few reps in reserve on your work sets on week one. The next week, start pushing a bit harder. A 4-6 week training cycle should ideally culminate in a hellish week of PR acquisition where you pull out all the stops to reach new levels of performance. Then deload, design your next cycle, and repeat.

The "best" progression strategy is the one you can pull off

Sure, if you're training for volume, it'd be ideal to focus on getting more reps and/or sets. And when training for strength, you should be focusing mostly on increasing bar weight. But often this won't be possible for various (and usually unknowable) reasons.

When I'm progressing through my warm-ups on a given exercise, it sometimes becomes apparent that I'm much more likely to be able to add reps than weight, or vice versa.

Even if you're focused on a specific type of progression, stay open to all options, and exploit whatever methods you can on that particular day. And if you can increase weight, reps, sets, etc., all at the same time, then do it!

Eat for your goal

Sometimes the only way to improve your performance on a specific lift, or improve the strength or size of a specific muscle, is to put everything else on "maintenance" status while you focus on that task.

A simple way to do this is to cut your work sets in half for every muscle and/or exercise that you're not specializing in. This won't be enough work to force those muscles to improve, but it will allow you to maintain them. The more experienced you become, the more you'll need to focus your efforts on one area at a time.

If your training isn't perceived as a threat, no response. If it's too great a threat, you get hurt. And if that threat is just right, you get just a little bit bigger and stronger. Rinse and repeat for years and then you're a mutant.

One final thing to realize about adaptation is that your body's ability to respond to physical threats is not unlimited, and the closer you get to whatever your personal limits happen to be, the harder it is to make continued progress. That means the more experience you have under the bar, the sneakier you'll need to be when it comes to finding threats that your body hasn't yet developed defenses against.

The complete guide to dominating the deadlift, from shoe selection to advanced training techniques.
Deadlift, Most Popular Deadlift Articles, Training
Eric Cressey May 24 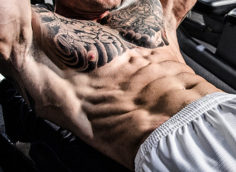 There's a lot of misinformation out there about the good ol' ab crunch. Here's the truth, backed by science.
Abs, Tips, Training
Nick Tumminello June 26

I spent a ton of time developing this program and believe it stands as my best work, ever.
Powerlifting & Strength, Training
Jim Wendler February 17