I'm often pigeon holed as the "single-leg guy" because I'm a strong advocate for single-leg training. For the most part I'm fine with it, but that doesn't mean I'm against bilateral lower body training. I like both, and the two are not mutually exclusive.

Fact is, while I believe that single-leg work is important and should be an integral part of almost everyone's training program, in terms of my absolute favorite lower body exercises – what I enjoy doing the most – deadlifts would be at the top of the list, followed by squats.

And if forced to narrow it down even further to just one exercise – you know, the "if you could only do one exercise for the rest of your life" scenario – it'd be the trap bar deadlift.

The most effective exercise to develop the entire back side of the body from feet to neck is probably the conventional deadlift, but if that's the only exercise you did, you'd still be leaving something on the table as far as total leg development is concerned. So in that regard, I'd choose the squat.

This is where the trap bar deadlift really shines. It essentially combines the deadlift and the squat, giving you the best of both worlds.

I could, theoretically, make a good argument for the snatch grip deadlift because the wider grip smokes the upper body like none other and increases the range of motion of the pull significantly, thereby bringing the quads into play more.

However, practically speaking, the snatch grip deadlift isn't very user-friendly, and not many people can do them properly, especially under load.

The trap bar deadlift, by contrast, is much more user-friendly. Many who struggle to squat and conventional deadlift correctly – whether due to lack of mobility and/or just not having a good body structure for the lifts – will be able to pick up the trap bar deadlift relatively quickly without issue.

Furthermore, because the load is centered more closely to the hips, it reduces sheer of the spine, thus making it a safer long-term option, especially for those with back issues.

If none of that other stuff matters to you, the trap bar will also allow you handle significantly more weight than you could otherwise pull with the straight bar, which I think we all can agree is pretty awesome.

Exactly how much more will vary between individuals, but as a reference point, I'm personally about 10-12% stronger with the trap bar than I am pulling conventional (probably a slightly bigger discrepancy than most), which is a lot when you're dealing with bigger numbers.

The problem is, however, that while the configuration of the trap bar allows you to pull huge weights, most trap bars won't accommodate huge weights. It may hold up to six skinny plates a side, but with thicker bumper plates, it may only be 4-5 per side. You can find mega trap bars that can hold more weight, but that's unfortunately not in the cards for most of us.

While pulling big weights is fun and cool, it's also extremely stressful on the body. I know I can't pull extremely heavy week in and week out without breaking down. In fact, when I do deadlift now, I do the vast majority of my pulling at the end of my workouts with relatively lighter weights.

I've also recently started playing with different variations to try to get a training effect without the need for such heavy loads, the goal being to reap the benefits of the exercise without stressing the joints as much.

Band-resisted deadlifts are a great way to add resistance and overload the lockout. The set-up can be tricky because most trap bars won't fit with most power racks or band platforms.

You can try using heavy hex dumbbells on either side of the bar to anchor the bands down, but I've found that once you start using heavier weights or pulling fast, the dumbbells have a tendency to slip, and if you have round dumbbells, that set-up definitely won't work.

I think the best way to set it up is to loop an end of a band over each end of the bar and push it all the way in and then put plates on the bar as normal to keep the band in place.

Check out the photo below: 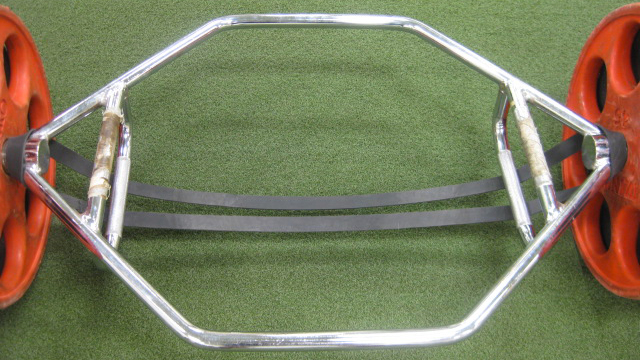 From there, simply stand on top of the band and have at it.

It's important to position the band in line with the center of your feet. If it's too far forward towards the toes or too close to the heels, it will pull you off balance.

Along those lines, after much experimentation, I've found that a one-inch thick band is as big as I can use before it starts pulling me off balance. If I want/need more band tension, I just add another thinner band, but thicker bands don't work for me.

I'm 180-185 pounds with a size 9.5 shoe, so bigger lifters may find they can use thicker bands, but you'll have to see for yourself.

Without specialized equipment to measure band tension, it's tough to gauge exactly how much tension the bands provide, and even if I could calculate it for myself, it'd vary for you based on your individual anthropometry (height, arm length, etc.) and whether you're using the low handles or the high handles.

But to give you a starting point, I'd estimate that for me (5'9" with slightly shorter-than-average arms), a one-inch band provides somewhere in the vicinity of 100 pounds of tension at the top when pulling from the low handles.

Sometimes I'll use lighter band tension and more bar weight. This is a great option in situations where the bar won't hold any more weight, as you can add a bit more tension without changing the feel of the pull too drastically.

Or if you're looking to work more specifically on your lockout or do more speed work, you can add more band tension and use less bar weight. Just be careful not to use so much band tension that it negatively impacts your stance.

I wouldn't worry too much about trying to figure out the exact band tension. As long as you're consistent with the set-up and the bands you use, you should be all set.

Another nice thing I've found with pulling against bands is that it's less stressful on my lower back since the weight is lighter coming off the floor where the lower back is most vulnerable, which in turns helps me keep better form. 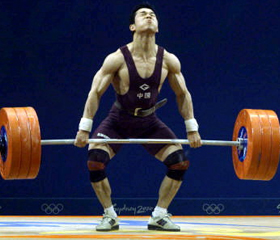 Duck stance deadlifts are a great exercise I picked up from Christian Thibaudeau and Dan John. Here you set up with your heels close together and your toes pointed out at approximately a 45-degree angle.

This is an awesome exercise to blast the quads, which I thought could be even better with the trap bar because it would allow you to stay more upright, which in turn would hit the quads even harder.

Trouble is, as you can see in the picture, the duck stance forces you to push your knees way out as you stand up, which doesn't work with the trap bar because your knees hit the sides of the bar.

To rectify that issue, you can get a similar feeling in your quads by putting your heels close together and only pointing your toes out slightly.

With the goal being to target the quads though, it's imperative that you focus on keeping the hips down and the chest up to keep the stress on the legs and off the back as much as possible.

I like doing these with lighter weight at the end of a lower body workout, and I actually feel them more in my quads when I drop the weight slightly and focus on keeping the form tight and the reps a bit slower than when I just go as heavy as possible. As such, I keep the reps higher as well, usually in the 8-12 range.

This is another one where technique really takes precedence over load. Do one complete rep, come halfway up, and lower back down again. That's one rep. Do each rep continuously without pausing and resetting on the floor to keep constant tension on the legs.

Like the close-stance version above, I like doing these at the end of the workout as more of a finishing exercise to make my legs really hate me. It won't take much weight at all to have your quads begging for mercy, so start light.

From a muscle-building standpoint, deficit pulls are a great way to hammer the quads.

From a strength-building standpoint, deficit pulls are a great way to improve your deadlift if you tend to struggle with breaking the bar off the floor. After pulling from a deficit, regular deadlifts will feel like a breeze.

For me, that's about 1-2 inches; anything more and it gets ugly. That height may seem negligible, but it makes a huge difference both in terms of difficulty (it's way harder) and muscle recruitment (it's more quad dominant).

Realize though that it's essentially two different exercises, so you'll have to adjust your weights accordingly. I notice about a 5-6% difference myself (I've always been relatively fast off the floor), but for a lot of people it can be as high as 7-10%, so just bear that in mind and realize that you're not really comparing apples to apples.

The exercises I've shown thus far have been more quad-dominant, so it's only right to give the glutes and hammies some love too.

For that, it doesn't get any better than the trap bar Romanian deadlift (RDL). RDLs are one of the best exercises around for building a rock-solid backside, and using the trap bar allows you to do so more safely.

With regular trap bar deadlifts you want to focus on keeping the hips down to some degree, but here you're keeping the hips high and doing a pure hip hinge motion, just as you would with barbell RDLs. It's a similar movement to dumbbell RDLs, just with far greater loading potential.

Having the arms in line with your body allows you to hinge back further into your glutes, which not only helps to work the glutes more, but also helps to take stress off the lower back: a win-win.

Because the trap bar deadlift is really a squat/deadlift hybrid, it gives you a lot of leeway from a programming standpoint. You could use them to replace squats and/or deadlifts if you don't like those exercises or can't do them, or you could use them in conjunction with those exercises for some variation to keep things fresh while giving your lower back the occasional break. How to implement them most effectively really depends on your goals.

If you don't have a trap bar, you might be surprised to know that they're relatively inexpensive compared to other specialty bars (and cheaper than a lot of standard barbells too), so if you have a home gym, it won't break the budget as much as you'd think.

And if you're in a commercial gym, you may be able to convince management to get one when you explain its many benefits and uses (it also works for rows, shrugs, and even overhead presses). I've negotiated that one successfully before, so it's definitely worth a shot.

Burn your foam roller and give the tennis ball to the dog. You're going to learn how to fix sticky muscles and bust up adhesions using nothing but your hands.
It Hurts Fix It, Mobility, Soft-Tissue Techniques, Training
Dr John Rusin August 20

Are you doing Olympic lifts to get bigger, stronger, and more explosive? You're probably wasting your time. Here's why.
Training, Weightlifting
Charles Staley December 14