Using resistance bands as a way to assist with pull-ups isn’t the worst programming mistake in the world, but they’re highly overrated and there are far better options.

Consider the full pull-up for just a moment: You don’t need a muscle mechanics lesson to know that the first few inches and the last few inches (where your elbows pull past your shoulders) are the easiest.

Somewhere near the middle of each pull-up is where it’s the hardest. For some, this starts just a few inches from the bottom hang position, while for others it starts much higher. Either way you’re strongest at the start, weakest in the middle, and strong(ish) again right at the top.

That’s all fine and good, but there’s something about a resistance band that makes it ineffective as a pull-up aid. Simply, the resistance profile of the band doesn’t match the strength curve of the exercise. 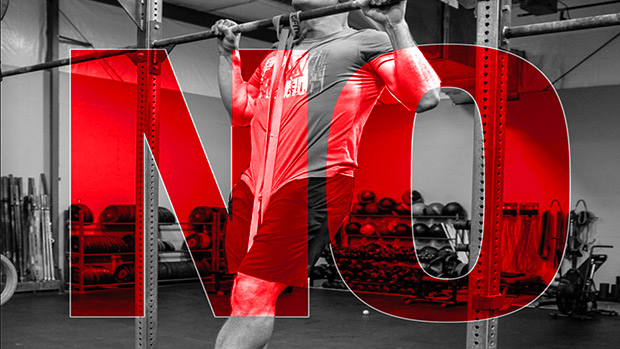 As the band stretches farther, there’s an increase in resistance and an ascending strength curve. That means you’ll get the most assistance from the band at the bottom, which is where you’re strongest.

Then, as you pull yourself up, the band assistance decreases.

In other words, they’re a mismatch. If anything, the band should be assisting in the opposite way, but that still wouldn’t be ideal. There’s no arguing that a band can provide marginal assistance, but when it comes to progressing your pull-ups, bands aren’t the most efficient method. Your strength and muscle development will suffer.

Wrongly setting up the band also worsens the problem. For the most effective set up, you’d want the band to still be stretched out enough at the top to provide some assistance, rather than the floppy mess you usually see.

If you do choose to use band-assisted pull-ups, try wrapping the band around the bar a few times to force a greater stretch to start and finish with.

Unfortunately, this increases the odds of the band snapping and is another reason why band assisted pull-ups aren’t the most efficient method available.

So I say forget them. Instead, try one or more of the options below to help work your way to pull-up mastery. They’re all easily scalable to both beginner and advanced training. All can be made easier or harder and progressed or regressed as needed. You can also vary your grip width and angle on each of them.

Eccentric (negative) pull-ups are a great way to build strength and back width. They help tap into the high force producing fast-twitch muscle fibers that are more likely to grow.

And because you’re stronger when you’re lowering yourself down (up to around 40% stronger), emphasizing the eccentric portion is a good way to build concentric strength too. In time, this will transfer to your full pull-up performance.

Eccentric pull-ups can be done with one arm or two. In the single-arm variation, you’ll be keeping both feet on the floor at all times. The two-arm version has you lowering your body with both feet off the floor (full bodyweight). They can be done using rings, a suspension trainer, or even a racked bar.

To make these even harder, consider using a weighted vest; maybe throw some chains on too for fun.

These are known by many names. More recently they’ve been referred to as rack chins/pull-ups while doing their rounds on social media as a “new” exercise, but many will remember these as being a part of the DC “DogCrapp” training system.

Anyway, DC pull-ups are a great pull-up variation that works wonders with all levels. Beginners will like these since you can unload a fraction of your bodyweight. Plus, if you’re going to push to failure on these, it’s no big deal.

Bodybuilders will love these, too, since the angle of pull is highly efficient for lat engagement and you get a good stretch at the bottom. You can also control tempo and body swing better.

And let’s not forget strength enthusiasts. They’ll appreciate these since they make it easy to throw some plates or chains across your hips. You can do these using a rack, rings, or suspension trainer, and with your feet on a flat bench or hooked over the top of an incline.

These can be adjusted to match everyone’s needs. They’re a nice way to raise your pull-up game while helping build a bigger and stronger back. They’re also great for teaching back engagement and staying in an active range of motion throughout.

A common pull-up mistake is just hanging on the bar at the bottom in an attempt to get a bigger stretch. Sure, allowing your scapula to move during pull-ups is good practice, but losing tension and just hanging there can ultimately cause shoulder issues. Seated pull-ups help you kick this bad habit.

If you don’t think a basic bodyweight version is hard enough, just try doing them as a drop-set as shown in the video. You can also try them in an L-sit (hips held 90 degrees with knees straight) for building gymnastic levels of bodyweight strength.

These work great with a bar, but you can also use a suspension trainer or rings.

Kneeling pull-ups offer many of the same benefits as the seated version. The primary difference is in the position of your hips. During the seated version your hips start in a flexed position, which can encourage some abdominal and hip flexor activation. With the kneeling version, however, there’s more of a plank-like position being held.

Although seated pull-ups can make for a good abs challenge, the kneeling version will develop much of the muscle coordination necessary for full pull-ups – different horses for different courses.

Complete beginners can adjust the height of the bar based on where their strength is lacking. For example, they could begin with the bar set to around head height and over time progress to the bar higher up the rack. Eventually, they can progress to lifting from an arms fully overhead position.

Crushing a medicine ball between the knees or wearing a weighted vest will make them even harder. Much like the other variations, these can also be done using rings or a suspension trainer.