Even smart lifters can misuse and abuse these four back exercises. Check out these common mistakes and learn how to fix them.

Mistake: Keeping the body straight as a rod.

Fix: If you want to hit the lats properly during pull-ups, cut your range of motion by a couple of inches and arch your back.

Lifters are often instructed to stay pencil-straight from head to feet on pull-ups, but doing it this way leads to poor biomechanics. Retracting and depressing the shoulders usually happens in pairing with spine extension (arching), and this position optimizes lat involvement. When it doesn’t happen – as in the case of a pencil-straight pull-up – the biceps, traps, and teres muscles take over and the humeral head will also be encouraged to shift forward in the shoulder girdle at the top portion of the movement. If you want to hit the lats hard, shorten your range of motion by a couple of inches and arch your back.

Mistake: Pulling the dumbbell straight up.

Fix: Pull in more of a sweeping “J” motion with the dumbbell starting slightly in front of the shoulder.

The one-arm dumbbell row, performed with one knee and one hand supported on a bench, is often misused and mistaken for an upper back exercise to train the shoulder retractors. What’s important to remember is that the fibers of many scapular retractors (like the rhomboids) travel in more of a horizontal pattern. Using a neutral grip to pull a dumbbell from ground-level straight up to a horizontal body doesn’t make these muscles work effectively. To really hit the lats, pull the dumbbell using more of a “drag” pattern that starts slightly in front of the shoulder and finishes closer to the mid-torso.

Mistake: Using spastic momentum which causes loss of tension in the muscles.

Fix: Learn to use the proper amount of “toprock” or body English so the back muscles are hit without the arms fatiguing first.

Barbell bent-over rows often fall prey to the use of momentum, looseness, and the havoc that ensues from just “finishing the lift.” There are just too many ways to compromise your form to get the reps up.

It would be a lie to say that “toprock” or body English isn’t permissible when doing a heavy row. The thing is, the development of the skill transcends learning the form of the movement. It takes practice to learn the timing and to understand just the right amount of toprock that can be used during heavy reps. It’s difficult to do a 225-pound bent-over row while completely rigid and motionless. There’s a ceiling on just how much your arms can pull. As long as the low back stays in a slight arch, incorporating a well-timed, tight toprock to start the lift is both beneficial and necessary.

Mistake: Using traditional dumbbell pullovers, which only engage the lats for a small portion of the exercise.

Fix: Do decline pullovers using a cable machine to keep tension on the lats for the whole lift. 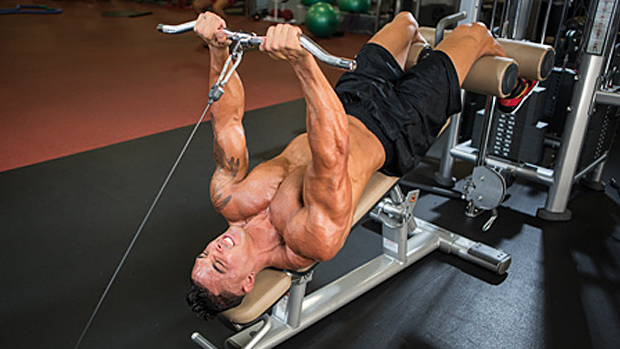 Most bodybuilders use pullovers for the lats, but how much impact does it really have on those muscles? Looking at the force angle, we see a movement where the dumbbell is being pulled downward by gravity. As lifters go through the pullover motion, they’re essentially traveling in a horizontal pattern while the dumbbell’s force angle is still pointing straight down.

Since the lats become involved when the force angle simulates a vertical pull motion, it means the lats would only really be engaged for a small portion towards the beginning one-third of the movement, before other muscles enter the scene. You can get more bang for your buck by performing a different variation.

Decline pullovers, using a decline bench and a cable attachment, keep the tension on the lats due to a force angle that opposes them for the entire duration of the lift. Use the bench and cable instead of the dumbbell if you’re looking to really torch your lats.