Listen, I need to tell you something. (Inhales and exhales deeply.) Okay, here goes. Your mother? She has a penis. Same with your wife or girlfriend and sister. They all have one. They even have a kind of prostate.

But hey, don't you be looking askance at them because it's perfectly normal for them to have those things or, at least, a version of those things that align with those sported by men.

Oh, and I almost forgot. Those female penises I mentioned? Well, this is a little indelicate, but they get a kind of erection, too. Their "penises" are of course more commonly referred to as clitorises, but aside from lacking a urethra and containing roughly double the nerve endings, they're very similar to penises, experiencing the same kind of blood engorgement when mentally or physically stimulated.

It makes perfect sense, though, because all of that genital stuff, the clitoris, the labia, and even the female "prostate" all arose from the same tissues as the male versions – the same basic genetic blueprint. One set of genitals went one way and one went the other, compliments of the X chromosome or the Y chromosome.

I'll draw it out for you.

These female prostates even contain prostate-specific antigen (PSA) and PSA phosphatase, just like the male versions.

It's kind of like nature took two sets of Legos and used one to build a facsimile of the Death Star from Star Wars and used the other to build a statue of Garfield, complete with a plate of lasagna. They're different, but both still made of Legos.

If all this is true – and it is – it's not much of a stretch to think that the same drugs or supplements men use to support their reproductive systems would work the same way in women too.

People are usually puzzled when I suggest that women use supplements that are targeted at men – things that raise testosterone, make orgasms more powerful, or that support reproductive and urinary tract health in general. They shouldn't be surprised. As I think I explained pretty convincingly, we're all remarkably similar.

Take Biotest's P-Well™, for instance. The ingredients in it have all been found to have fairly profound positive effects in women as well as men:

I'll start with the most well known – at least to women – first.

There probably isn't a grown woman alive in America who hasn't at least heard of using cranberry juice to treat or reduce recurrence of cystitis or urinary tract infections in general.

But cranberry concentrate has another, less publicized benefit to both men and women: it promotes complete bladder emptying by strengthening "bladder detrusor contraction and relaxation," which is a technical way of saying that it makes the bladder muscles more effective in doing their job.

Punicaligan is a phytochemical, a polyphenol to be precise, found in large amounts in pomegranate fruit (mostly the rind). Men are interested in it because it's a powerful inhibitor of aromatase activity, which means it thwarts the conversion of testosterone into estrogen, thereby elevating testosterone levels naturally.

But punicaligan from pomegranate fruit isn't just about testosterone and sex. It has a lot of health benefits that are gender neutral:

Lycopene, a carotenoid famously found in tomatoes and watermelon, is often called "Nature's Viagra" because it elevates levels of nitric oxide (NO), which relaxes the smooth muscle fibers of both penile and clitoral blood vessels so that more blood can flow into the organs.

And that's exactly how drugs like Viagra work, which is why many doctors are now prescribing it to female patients.

But like the other substances in P-Well™, lycopene has plenty of other super powers that pertain to both men and women:

I can understand why something called P-Well™ might be pigeonholed as a supplement made exclusively for men. After all, one of the product's effects is promoting healthy prostate size and function, thus allowing men to pee well, or pee better.

However, the product provides many other beneficial effects to vascular sexual health and urinary tract health, as well as providing a host of other general health benefits, none of which are gender specific. 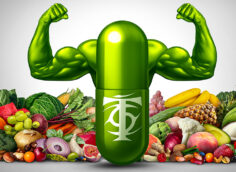 The time you spend in the gym will be wasted If you don't get the proper pre-workout and intra-workout nutrition. Here's what you need to know.
Bodybuilding, Diet Strategy, Nutrition & Supplements, Plazma, Workout Nutrition
TC Luoma January 15