Who Would You Help?

You're in the middle of your workout when you notice two equally attractive female lifters in need of help. Both are struggling to unload the plates off a barbell.

What do you do?

Well, according to some new science, if you're an average straight male, you will (perhaps unconsciously) help out the woman with the most erect nipples.

"Wait, did he say nipples?" Yes. Hold on, it gets weirder.

According to the same study, if you're an average heterosexual woman, you'll help out the woman-in-need whose nipples you CAN'T see.

What in the name of Queen Areola, Ruler of Planet Niptune, is going on here?

Sometimes I wonder if researchers just think up fun stuff to study because they're bored of hunching over microscopes and pouring over metadata. Then, to justify their funding, they give their study a fancy name like "The Effect of Nipple Erection on Intended and Expected Altruism."

Anyway, that's the name of this study. I'm not even kidding.

Researchers showed over 400 college-aged men and women photos of females in need of help. After looking at the photos, the study participants were asked a series of questions about whether or not they'd help out the needy females.

The scenarios involved things like helping the woman carry a heavy box, change a tire, tutor her for free, or loan her a hundred bucks.

Two sets of photos were used. In one set, the women needing help had visibly erect nipples. In the other, nary a nip was seen. (I assume some Photoshopping was involved.)

The researchers noted that altruism, in this case, may not be altruistic at all. Instead, the helping behavior is just a chance to interact socially with a potential new bed buddy.

Okay, so why did the female participants say they would most likely NOT help the women with their high beams on?

While the researchers didn't get into that much, previous research shows that women get competitive around other females they perceive as more attractive. Those women are viewed as competition. It's a lizard-brain instinct, at least according to many biologists.

In fact, in the absence of a threat or competition, testosterone is associated with generosity, protectiveness, and generally pro-social behaviors.

So, let's not associate all male altruism with sex-seeking and social dominance. Sometimes we don't even care about nipples. Especially if she has a nice butt. (Zing!)

Nipples affect behavior. If you strive for self-awareness and subscribe to the mantra of "know thyself," I suppose that should be added to your list of life skills.

Men should at least be aware of these primitive but powerful instincts, especially if a woman is asking to borrow a hundred bucks.

Women, however, should make sure their headlights are shining brightly if they do need to borrow a hundred bucks. They should also help out women with perky nipples. Hey, ma'am, maybe she's just cold.

Listen to the science. 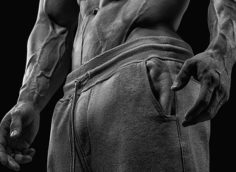 Our favorite hormone has a long list of physiological peculiarities and a swashbuckling, character-filled history. Testicle transplants, anyone?
Living Better, Pharma, Testosterone Optimization, TRT
TC Luoma August 7
Not too long ago, the US government effectively banned the sale of prohormones. With "andro" and anabolic steroids now illegal, bodybuilders and athletes were forced to once again rely only on protein powders, healthy foods, and heavy weights. There was no more juicing, no more cheating, and no more drugs being used in the pursuit of fast muscle and improved performance...
Living Better, Pharma, TRT
Anthony Roberts September 8

For females, sex drive, arousal, and O's all get better with this vitamin.
Feeding the Ideal Body, Nutrition & Supplements, Testosterone Optimization, Tips, Vitamin D
TC Luoma December 22
I remember when I was still at University, earning my degree in English, and had to read Dante's Inferno. For anyone who isn't familiar with this story, it's about the author's three-day descent into Hell, guided by his greatest inspiration, the Latin poet Virgil.
Living Better, Pharma, TRT
Anthony Roberts April 27