Editor’s Note: T Nation was approached by an IFBB pro bodybuilder who wanted to write anonymous articles for us as well as answer questions honestly in our steroid forum. After verifying his identity we decided to give him a platform. “Shadow Pro” was born.

Pro bodybuilding isn’t about getting “beach lean” or building a physique that looks pretty good in the gym while wearing a tank top. It’s about being inhumanly muscular and insanely shredded at the same time. This process also requires a large amount of bodybuilding drugs to help maintain a high level of muscle mass while getting down to ridiculously low body fat.

Of course, none of the drugs will help if your diet, training, and regular supplement regimen is anything less than perfect. If you mess up any of those parts, it doesn’t matter how many drugs you take because they won’t help.

Getting shredded for real stage condition like a pro takes a lot of suffering. You’ll be tired, hungry, generally miserable, and you’ll question why the hell you’re doing this to yourself.

Being in a big calorie deficit, doing lots of cardio, and handling some bad mental side effects from drugs is anything but fun. It’s certainly not glamorous, and can be painful and boring at times. Not everyone can tolerate eating the same foods meal after meal after meal, increasing cardio when your energy level is already at an all-time low, or getting weaker in the gym as you get deeper and deeper into the diet.

On the other side of things, when you get closer to the show your body is changing daily. There’s something very addicting about waking up in the morning and seeing more striations and lines than the night before. As you get to the end of the week, feeling cranky and starving, you know that you’ve overcome another week of diet and training. You start to almost feel invincible as you see the progress each week.

Think about it. You’re fighting against some of the most basic human needs – food and rest – and you’re actually winning the battle. You’re dealing with hunger cravings, tiredness, physical pain, mental hardships, and you still overcome them all during the months of hard work.

As you get to the last phase of the diet, something very special happens both mentally and physically. You learn to embrace the pain and, if you’re lucky, you almost start to enjoy the process. If you can beat the suffering you’ve put yourself through with this diet, you can beat anything else that life throws at you.

Unfortunately, the saying, “The more you suffer, the better you look” is pretty accurate, especially when it comes to getting into proper stage condition.

I’ve done dozens and dozens of shows, but I can’t say any one of them was felt easy. Some of them were harder than others, but literally every single prep included some pretty high levels of suffering. Whether it was feeling lethargic, sluggish, moody, tired, hungry or any of the other fun things that come with a heavy cycle and a calorie deficit, there’s just no such thing as an easy contest prep. 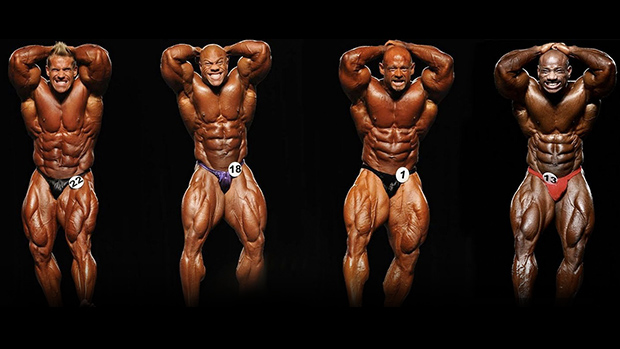 Back in the day, when I first started competing, we were only using one anti-estrogen in the cycle. Today it’s not uncommon to use two or three, sometimes more, in the same cutting cycle in order to get as dry and hard as possible. Sleep aids and muscle relaxers are also commonly used to lower stress levels while dieting. Some lazier bodybuilders will use DNP to try and shorten the fat loss process. I do not recommend this, but it does exist.

Here’s an example of a common pre-contest cutting cycle:

I’ll always try to adjust things during a cutting phase in order of importance:

All of these factors affect each other and sometimes I change one or more at the same time even though that’s the general order. Let’s say a certain amount of cardio is making you lose muscle but you still have plenty of fat to lose. You’d lower the cardio but increase the fat burners.

It really depends on the timing and the goal you want to achieve. More than anything, it’s the timeline for the show that will determine when you change things in the cycle. The rest of the variables are more open to change all throughout the prep depending on how you look.

When it comes to peak week, everything changes depending on the strategy. If you need to deplete and load, then the last week will have a few training sessions to completely deplete glycogen before you start loading. But if you’re ready and not really doing any kind of depletion/loading protocol, you want to keep things the same as you’ve been doing. For the cycle, you’ll cut all injectables 4-7 days out, add diuretics according to what you need, and increase anti-estrogens in the last week as well.

The template I gave is something I have actually used. I don’t want to give any more intense protocols for safety reasons. I don’t think people who aren’t competing at a pro level need to try it or even know about it. We’re doing some stupid shit as pros and I don’t want some 18-year old kid who thinks he’s the next Phil Heath to try something like that. Some things are better to keep quiet because I know that the minute some people read it, they’ll be running off to try it.

Pro bodybuilding is all about who can be the biggest freak. I don’t blame the competitors who do whatever it takes to get into this condition, because it’s what brings them attention on stage. They’re trying to win prize money or represent sponsors to make their living, so it’s a business and people will do whatever it takes to be the best.