1 – It’s better than fruits and vegetables

In 2012, researchers at the University of Scranton in Pennsylvania reported that popcorn actually contains more polyphenols than fruits and vegetables.

While vegetable haters everywhere rejoiced and hurled their spinach salads into the nearest deep chasm, their joy was premature. Polyphenols are micronutrients that play a role in preventing degenerative diseases, including cancer and cardiovascular disease. And yes, while popcorn has more of them than fruits and vegetables, it doesn’t mean having a bag of popcorn at the movies is as good as having a salad at the Soup Plantation.

Fruits and vegetables still hold dominion over popcorn because they contain more vitamins, minerals, and phytonutrients in general than popcorn. However, popcorn can and should be included as part of a well-rounded, healthy diet.

2 – Popcorn can give you stronger erections

Erections are all about hydraulics; they’re made possible by blood flowing through the pipes (blood vessels and capillaries) of your penis. As flow and hydraulic pressure increases, your engorged penis ratchets ever upwards, casting a hopefully giant shadow on the townspeople below.

If the blood vessels are constricted, though, nothing happens. It’s like when you’re trying to wash your car and your weasely kid brother is hiding behind the garage kinking the hose. In the workings of the penis, it’s chemical nitric oxide that sort of unkinks the hose. With sufficient nitric oxide, blood vessels pop open and blood flows unimpeded, yielding a functional erection.

Popcorn comes into the picture because it’s a good source of the amino acid L-arginine (about half a gram for every 3 ounces of popcorn) and arginine is the biologic precursor of nitric oxide. While it won’t take the place of erectile dysfunction drugs, popcorn could conceivably help optimize blood flow.

Whether because they work more, sweat more, or just plain live more, a majority of American athletes seem to be deficient in a number of minerals, zinc and magnesium among them. Both of these minerals are crucial in maintaining high levels of testosterone and high levels of free testosterone, along with proper sexual function in general.

Popcorn contains both of these minerals. While popcorn’s zinc component doesn’t, on first reaction, seem all that high (four popped cups contain around 10% of the RDA, which is 15 grams), it’s a highly absorbable form. A four-cup serving of popcorn also contains about 43 grams of magnesium, which, in addition to helping ensure high testosterone levels, also plays a role in the metabolism of nitric oxide, which, as explained, gives erections their oomph.

4 – Popcorn has a low glycemic load

The glycemic load of a food is a measure that evaluates how much a certain quantity of a food will raise blood glucose levels. You get it by multiplying its glycemic index by the amount of carbs the food contains and dividing by 100, and this is why popcorn fares well by this measurement.

Popcorn, by itself, has a relatively high glycemic index of 70, but its glycemic load is only 8 because the typical portion is low in carbs. Of course, the closer your serving container starts to resemble something you’d slap on the face of a large horse, the more this benefit fades.

No Microwave Popcorn, Though!

You know the sound of kernels popping in the microwave, right? Well, every time a microwave popcorn kernel explodes, an angel’s testicle ruptures.

It seems that some microwave popcorn bags contain a chemical called perflourooctanoic acid (PFOA), which is a chemical that puts the kibosh on sex drive, in addition to possibly being implicated in testicular cancer and suppressing immune function in children.

The Healthiest Way to Make Popcorn 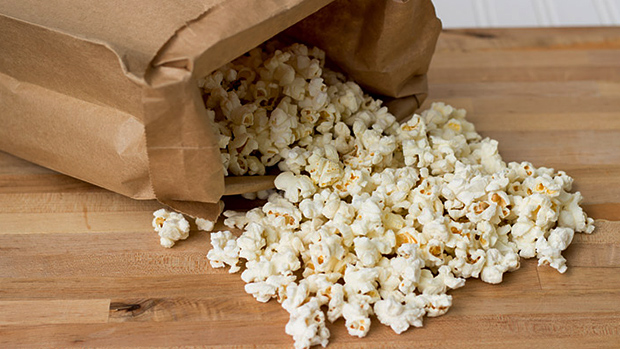