As hard-training athletes, we're constantly seeking out anything that can accelerate muscle and strength gains, or promote fat loss. Well, it's time to rejoice. Your latest salvation may come in the form of chocolate.

The benefits derived from chocolate, dark chocolate in particular, are caused by the presence of a flavonol compound known as epicatechin. Epicatechin is a naturally occurring phytochemical present in dark chocolate and cacao.

While there's no guarantee that the effect will translate over to humans, it's interesting nonetheless, and future research will tell us more.

Researchers from the Netherlands found that epicatechin increases levels of the satiety hormone ghrelin, which can lower the appetite. This may explain the benefit of having a tiny bit of dark chocolate at night to prevent the munchies.

One study conducted on middle-aged people used an epicatechin dose of 1 milligram per kilogram of bodyweight, taken two times daily. The effects were promising but the duration was short.

Anecdotal reports have indicated that people using double this amount also see good results. If you choose to go with dark chocolate itself, 40-50 grams daily should suffice. Make sure it contains at least 70% cocoa which will be stronger in epicatechin.

While the research still has years to go before we can draw any substantial conclusions on its beneficial effects, cocoa still has many favorable nutritional benefits: high mineral content (especially magnesium), healthy saturated fats, and a positive impact on dopamine. 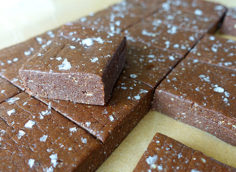 Go ahead, indulge. But do it with more protein and without added sugar. Make these. Here's the easy recipe.
Feeding the Ideal Body, Nutrition & Supplements
Gareth Sapstead December 27