The PSA and Paralyzing Fear

Prostate specific antigen, or PSA, is a protein produced by both normal and malignant cells of the prostate. Physicians have measured the blood levels of this antigen since the 1970's because it's widely recognized as a reliable diagnostic tool in detecting prostate cancer in men.

However, at the risk of being beaten up by the medical community, chained pantsless to a hypoallergenic stock, and then subjected to painful digital rectal exams by the "Top 100 Prostate Surgeons" as determined by USA News and World Report, I'm going to cast some aspersions on the PSA test.

My motive is this: I've had at least three friends who were told they had abnormally high PSA readings. In all three cases, they were told to wait three to six months to be re-tested. The subsequent tests all came back within normal ranges, but all three men spent the six-month waiting period in hell, paralyzed by the fear they had prostate cancer.

So in order to maybe spare someone else the stress, I did some research. Now you may be too young to worry about the PSA test, but sooner or later, a doctor will advise you to get one. Or you might have an older male in your life right now who you care about that might be interested in this info.

According to the latest assessment by the US Preventative Services Task Force...

Even the guy who discovered PSA, pathologist Richard J. Ablin, called it a "profit-driven public health disaster" because it led to approximately 30 million American men being tested every year at a cost of at least 3 billion dollars.

You see where I'm going here? But by no means am I trying to dissuade someone from getting the test. By all means, if you're closing in on 50 or 55, or have a close relative with prostate cancer, think about getting your PSA tested. After all, the test has clearly saved some lives.

However, it's not foolproof and it comes with its own list of serious drawbacks, including potential severe emotional stress, often for nothing. 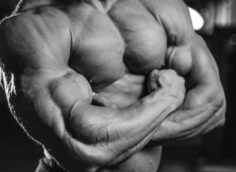 How to get better quality sleep, recover faster, and be ready for the gym. Check out these tips.
Cortisol Control, Living Better, TRT
Dave Barr August 24
A while back we asked some of the world's top strength coaches and nutrition gurus to share their most powerful tips, but when Ian King tackled this assignment, he decided to go about it in a different way.
Opinion, Powerful Words, Strong Words
Ian King October 20