The layer system is one of the most effective programs for rapid gains in strength and size. You focus on only one exercise per workout, but you do a lot of volume for that lift using different training methods done in succession. The order of the methods improves the efficacy of the one after it.

You LAYER the methods – one after another – to create a greater training effect than simply using them all haphazardly. This progression of layers creates muscular and neuromuscular activity that promotes maximum gains.

You'll do five layers each training day. Complete one layer before moving on to the next. We'll use the bench press to show how each method looks.

The first layer is overcoming isometrics. The purpose is to turn on the nervous system while creating as little fatigue as possible. You'll be pushing or pulling as hard as humanly possible against the safety pins in the power rack. Do this for 6 seconds of max effort and 4 sets. Take 60 seconds of rest between sets. Use only one position for the overcoming isometric and select a position where you can produce a very high level of force.

For the curl you don't need to use the power rack. Simply load the barbell with too much weight for you to lift it, let it rest on the support, adjust the preacher bench so that when you grab the bar your elbows are at 100 degrees, and then try to curl the weight off of the support for 6 seconds.

This layer is a ramp. You're ramping up the weight and neural activation on every set. Take 5-7 sets to reach your 2RM. Start with roughly 60-70% of your max and perform only sets of 2 reps, adding weight until you reach the maximum you can lift for 2 reps with perfect form.

Every rep should be the same. No sloppy reps even with the lighter weights. And don't do more than 2 reps; the goal is activation with as little fatigue as possible. Don't rush between sets but keep the tempo fairly rapid. Ideally take 2 minutes or less between sets.

This layer is a cluster, which is the most effective method for stimulating growth via mechanical stress. Your objective is to place a lot of mechanical stress on the muscle fibers causing a degradation that will stimulate the "repair and grow" process.

After the first set, if you reached 6 reps you can increase the weight for the next set. But if you didn't reach 4, or if the fourth rep was almost impossible to do, lower the weight. After the second set do the same process. If you did 4 or 5 solid reps in a cluster, stick to the same weight for the next set. Rest up to 3 minutes between clusters.

This layer contains a slow eccentric phase to maximize mTOR activation. Do 3 sets using 70% of the 2RM ramp and shoot for 6-8 reps. Perform them with a 4-5 second eccentric (lowering) phase. Do the full range of motion and accelerate the weight on the way up. Use the same weight for all 3 sets unless you can't reach 6 reps, then lower it slightly. If you reach 8 reps easily, then instead of adding more weight, do the lowering phase even slower. Rest 90 seconds between sets.

This final layer increases growth factor hormones through constant tension. Do 1-2 sets of constant tension lifting. Only perform the middle portion of the movement. For example, in the bench press go from about 2 inches from the chest up to 1-2 inches short of lockout. Never stop during the movement. As soon as you reach one end of the range, move in the other direction. The movement should be kept fairly slow, 2-3 seconds in both directions.

Use 50% of the 2RM ramp and do work until you can't do it under the conditions mentioned above (if you have to pause or lock out the weight, the set is over). The goal is to be under constant tension for 45-75 seconds.

* The incline bench press is actually more effective than the military press to develop the delts. The recruitment of the deltoid is about the same but you use more weight. You also get the benefit of more pec stimulation.

* * You can't do a snatch-grip high pull with a slow eccentric or constant tension. So you'll do the high pulls for the ramp (layer 2) and clusters (layer 3) but the Karwoski shrug for the last two layers. The Karwoski shrug is a cross between a shrug and an upright row: pull the bar as if doing an upright row but only until it goes above your navel, focusing on squeezing the traps.

Do these over 4 to 5 training days. The biceps exercise can be done on the high pull day or on a fifth training day, your choice. This program is based on the big lifts. If you find that the lats/back are understimulated it would be fine to add back work (regular lifting style) either at the end of one of the training days or on its own.

You can use the layer system for 6-8 weeks while making continuous gains. After 8 weeks take a deload week if you wish to continue with the program, or switch to another program for 4-6 weeks, then get back to the layer system.

To maximize the effects of the layer system, use the following:

Plazma™: For enhanced growth and recovery.

Go through a three-week cycle before adding more exercises. The layer system is very effective by itself. It looks simple on paper, but these 16 sets have a high stress level. The specific order of the layers make these 16 sets much more effective, and more demanding, than simply doing 16 regular sets.

If you add more lifting, limit it to isolation work for the muscles involved in the lift trained that day. If you trained the bench press, limit yourself to a small amount of isolation for the triceps, chest, or delts. Don't exceed two total additional isolation exercises per workout. Do 3 sets of 6-8 reps each.

There are two types of work you can add at the end of a session:

When you do a lot of work on one exercise, it leads to a greater recruitment of muscle fibers as well as more fatigue of those recruited fibers.

People think that doing a lot of exercises for one muscle group is the best way to recruit more, and different, fibers. In reality, you can recruit just as many different fibers by doing a lot of work on the same movement pattern. Why? Because when you do a lot of volume you fatigue the fibers more by repeating the same exercise over and over. When the fibers have been fatigued too much to do the job, the body will call on different fibers. You get muscle fiber fatigue and muscle fiber variety.

Dr. Zatsiorsky pointed out: "A muscle fiber that is not fatigued is not trained." This means that the number of fibers you recruit isn't a guarantee of maximum growth. You need to fatigue those fibers, and doing more sets of fewer exercises works better than doing fewer sets of more exercises.

The layer system has a high neural component. By focusing only on one lift per day you also facilitate the development of neural efficiency – the less variety you have in a session, the faster the motor learning for the task being done.

3 The Nervous System is Amped Up

Every time you contract a muscle two things happen – one thing that increases performance and another which decreases it. First you activate the nervous system – you turn it on. That's why you can't just walk in the gym, load the barbell up with your squat 1RM and do it. You need several sets to get the nervous system ready.

When you produce force, you amp up the nervous system. The more force you must produce, the more you amp it up. This is called "post-tetanic potentiation." The result is that everything you do after that will be more effective because that potentiation increases muscle fiber recruitment and rate coding/firing rate. The more fibers you recruit and the faster they're firing, the more force you can produce and the more growth you can stimulate.

The second thing that happens is fatigue. You expend energy and fatigue the muscle fibers. This obviously decreases your performance potential. The more reps or the more work you do, the more fatigue you create. With the layer system you use methods to potentiate the nervous system as much as possible while causing as little fatigue as possible. This way when you get to the muscle-building layers, your level of performance and muscle fiber recruitment is drastically enhanced, leading to more strength and size gains.

There are three main ways of stimulating muscle growth. The layer system uses each one: 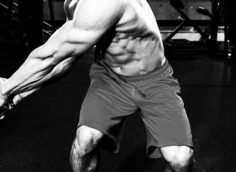 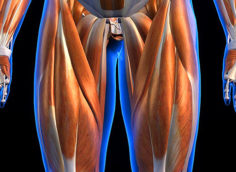 These untraditional exercises will leave you pumped for hours... if you can take the pain.
Bodybuilding, Legs, Tips, Training
Susy Natal March 19